The Young Ones Fare Badly, Too 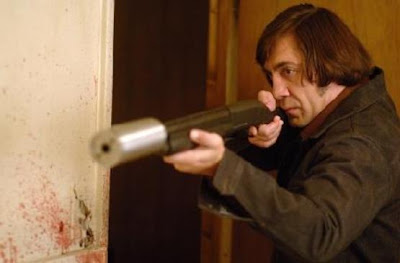 There are, generally speaking, two opinions on No Country for Old Men. Some people (including me) will tell you that it’s the best thing the Coen Brothers have ever done. Others—many, many others—will tell you that the film is great until the last couple of minutes. What this means is that we’ll be getting to spoilers here eventually, because this is an ending that needs defending.

This film is the story of three men, none of whom appear on the screen at the same time. First we have Llewelyn Moss (Josh Brolin). Out hunting one day, he stumbles across a drug deal gone very wrong. Following the trail of the one man to walk out of the gunfight alive, he discovers a dead body and a satchel containing $2 million. Naturally he takes this home, but returns to the scene that night to see about a man still at the scene who was dying, but not yet dead. He’s discovered there by a pair involved with the trade, and he flees, returning home for the satchel. He also sends his wife Carla Jean (Kelly Macdonald) to her mother’s house to keep her safe.

We also meet the man who will spend most of the film pursuing Moss and the money: Anton Chigurh (Javier Bardem). Chigurh is a hit man who has been hired to recover the money, and he is perhaps the most ruthless man ever portrayed in a film. Our first view of him is strangling a deputy with his handcuffs. He then steals a police car, pulls someone over, and kills him with a captive bolt pistol (usually used to slaughter livestock) and takes his car.

Our third character is Sheriff Ed Tom Bell (Tommy Lee Jones). He is a man who has aged into his job as sheriff, and comes from a line of lawmen in the region. He fills this role as sheriff of this expanse of Texas with a sort of resigned dignity, knowing that there will be violence that he must see to, and understanding it less and less every day.

Sheriff Ed Tom is on screen less than the other main characters, but it is he who stands at the heart of the film. He is the moral center of the action as well as the character we are most likely to attach to as the protagonist. In the role, Jones carries the weight of the area on his soul. This is a man broken down by what he has seen and knowing what he will see in the future, a man who can only react to the increasing horror of his work by strapping on his sidearm and continuing to walk forward into whatever the situation throws at him.

All of the performances are notable ones. Javier Bardem comes across as one of the purest incarnations of evil ever filmed. Chigurh has a particular code that he lives by. He is a ruthless killer, someone who destroys everything he sees simply because it might see him, but there is evident a twisted moral ethic by which he works. He kills with no pleasure in general (although there certainly seems to be some pleasure at the start), but rather with a sort of satisfaction in doing a particular job well.

As the story unfolds, Chigurh tracks Moss across Texas, following him by means of a transponder hidden in the money satchel. Moss demonstrates his own particular cunning, renting back-to-back rooms at a motel and shifting the money satchel through the air vent to keep it out of Chigurh’s hands. Along the way, we encounter Carson Wells (Woody Harrelson), sent to track down both the money and Anton Chigurh. Like Chigurh, Wells is ruthless and dedicated to his craft, but it’s also evident that he lacks the completely cold-blooded nature of Chigurh.

So let’s talk about that ending, shall we?

For many people the end of the film is a dud because there is no confrontation with Chigurh. At the end of the film, Chigurh is in a serious car accident, but he walks away, heading toward his next assignment. Moss is killed by Chigurh, and Ed Tom Bell retires.

So why is this such a great ending? Because it’s all about the opening narration from Ed Tom Bell. He tells us in the first few moments of the film that he is losing his ability to understand what is happening around him. He’s willing to die for the job if it becomes necessary, but as he tells us at the start, he doesn’t want to take his life into his own hands when he no longer understands the terms of the bet.

And so, the end, with no confrontation and Sheriff Bell’s retirement, we get the ending this film needs. Sheriff Bell no longer has a handle on the nature of the criminals he is seeing, and rather than risk being killed for something he cannot fathom, he hangs up his pistol. That is the entire point of the film—that Sheriff Bell is unable to determine a course of action and is equally unable to get a line on Chigurh and the people like him. It’s a stark and poignant moment, and it is truly what the story needs.

In short, I think this is the best thing the Coens have ever done. It follows the book it was based on religiously, and offers a new dark vision of what crime has become

Why to watch No Country for Old Men, The Coen Brothers have never been better.
Why not to watch: There’s a fair chance the ending will piss you off.
Posted by SJHoneywell at 11:51 PM