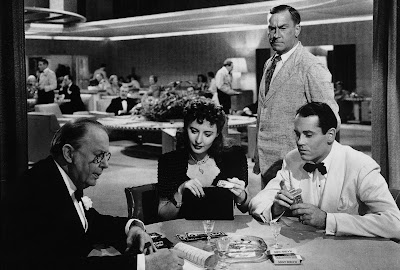 Every three months, my output on this blog drops to nearly nil. This is because of my life outside of the blog. Every three months is the end of an academic term, so generally speaking, in the third weeks of March, June, September, and December, I am buried in papers that need grading and grades that need posting. Still, I am very much a person who needs some level of distraction. I take breaks. Today, I took my breaks in the form of watching The Lady Eve as a step away from the dwindling mountain of ungraded student work, watching in 5- and 10-minute bursts throughout the day.

Let’s get this out of the way right away. Had I been alive and of the right age in the early 1940s, my pin-up girl of choice would have been Barbara Stanwyck. It’s not merely that she was drop-dead gorgeous. It’s her entire persona. There’s a gutsiness to her that I really admire. I felt it only fair to come clean on this because it will likely color the rest of this. So, just to be clear, I dig Barbara Stanwyck, or at least her typical screen persona, which is precisely what she plays here.

Our hero, or at least the patsy for the allure of Ms. Stanwyck is Charles Pike (Henry Fonda). Pike is the heir to the Pike’s Pale Ale fortune, but like many young men in such a position, he has no interest in beer, ale, or anything else of his father’s business. Instead, Charles has devoted his life to study and scientific enterprise. As the film begins, he is just ending a year of work in the Amazon, finding and cataloging new species of reptiles. It’s worth noting that Charles Pike is no dilettante, but an actual scientist.

To leave the Amazon, he stops a cruise ship (he’s got that kind of money) and boards, where he immediately becomes the object of attention for every single girl on the ship. But it’s Jean Harrington (Stanwyck) who is going to win this battle. Sadly for Charles, Jean Harrington is a con artist who works with her card sharp father, “Colonel” Harrington (Charles Coburn). Jean arranges for Charles to literally fall at her feet, and then dominates his attention, even arranging a bridge game in which she and her father can lose a ton of money to Charles to earn his trust. The only person looking out for Charles Pike is Muggsy (William Demarest), his aide, valet, and confidant. And Muggsy doesn’t like what he sees.

Of course, things are more difficult than that. Jean actually falls for Charles and tries to protect him from her father, and Muggsy discovers who she really is, which makes Charles give her the heave-ho. Still smarting from being dumped, Jean reinvents herself as the Lady Eve Sidwich and attaches herself to another conman named Sir Alfred McGlennan Keith (Eric Blore), reinserting herself into the life of Charles Pike. And thus the wacky hijinks ensue.

In all honesty, if you’ve ever seen a single romantic comedy in your life, you can tell where this film is going from a mile off. It’s not much of a spoiler to comment on how this one ends because if you’ve never seen this film but have read this far, you know where it’s going. Of course these two are going to end up together. We want the clumsy, romantically-challenged Charles to find love at last, and we just as much want to see the shifty but ultimately sweet Jean be redeemed in the end. So, naturally, that’s what Preston Sturges gives us. It’s not the destination that matters here because we all know where we’re going. What matters is the trip and how we get there.

And it should be no shock that for me, one of the joys of getting there is the performance by Barbara Stanwyck. The reason it’s such a great role, though, and such a great performance is that in virtually every scene, it’s evident to us that she is saying one thing, doing another, and thinking a third—and all of this comes through in her body language and her eyes. Early in the film, she is introduced to Pike’s new rare Amazonian snake, and she panics. In the scene that follows, it’s obvious to us that she is hanging on Charles for “protection,” but actually seducing him, and really thinking about how to take him for his money. It’s perfect, because he’s so oblivious to it and we as the audience are so easily able to see it.

Another real pleasure in this film is Henry Fonda. Fonda has long been considered one of the greats of American cinema, and this film is one of the reasons why. Fonda is always remarkable in no small part because he’s so damn believable in every role. He’s sympathetic in this film as the guy who gets his heart broken. I like this character, and I like him.

Where this film succeeds more than the typical romantic comedy—particularly the modern ones in which most of the characters are pretty hateful—is that this film goes for some real depth with the characters. Jean is a cheat and a bit of a louse, but truly loves the guy, and acts the way she does because she doesn’t have another way to act. Pike’s reaction to this situation is so believable not because he acts simply like a man who has been hurt, but because he acts precisely like an inexperienced man who has been hurt. His reactions have the tenor of a man who expected everyone else to live up to his ideals and is truly disappointed for one of the first times in his life.

So, while The Lady Eve is unbelievable in many respects and classic Hollywood era extreme, it’s also brilliantly conceived and entertaining from start to finish. And, of course, it’s got miles and miles of Barbara Stanwyck, and that’s never a bad thing. And it’s worth mentioning, Eugene Pallette, who plays Pike Senior is a constant pleasure in films like this one. You may not recognize the name, but if you’ve seen films from the 1940s, you’ve seen a great deal of his work.

Why to watch The Lady Eve: Because Barbara Stanwyck and Henry Fonda are national treasures.
Why not to watch: Like all screwball romances, it’s pretty much fluff.
Posted by SJHoneywell at 10:51 PM