May-December romances in film generally go in one direction. We’ve had enough younger woman-older man combinations thrown at us that we don’t flinch that much when we see them. Seeing Sean Connery romancing a woman half his age is par for the course. They don’t go the other way that often, and when they do, they tend to be comedic. When it happens in the real world, we look at the young woman/old man pairing as an example in gold digging. Going the other way, the typical thought is psychosis…in the man. 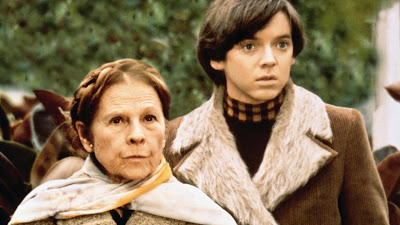 Harold and Maude plays with the May-December romance angle in an extreme and unusual way. This is one of those strange films that plays with the idea of a very young man falling in love with a much, much older woman. It is, naturally, a comedy. But the comedy it offers is a richly hued black.

We’re introduced to Harold (Bud Cort) first. We watch him calmly walk through a richly-appointed room and, after a few minutes, we watch him hang himself. His mother (Vivian Pickles), a wealthy and emotionally distant and controlling woman, enters the room shortly afterwards and makes a phone call, sees Harold swinging, and continues her conversation. Several things soon become evident. First, Harold isn’t really dead. Second, his mother has seen this all before. Following a dinner party, Harold tries again, this time by splashing stage blood around his mother’s bathroom and pretending to slash his wrists and neck. Her reaction to this is a little more severe, and Harold winds up in therapy. Shortly after this therapy session, he buys himself a hearse to drive around in, and this causes his mother to be set on the path of getting Harold some focus.

At first, this comes in the form of his Uncle Victor (Charles Tyner), a career military man who lost his right arm in the war. Uncle Victor claims to have been McArthur’s right-hand man, a nice piece of irony since Victor’s right hand is now missing. He has arranged a hidden string on his uniform to allow his empty sleeve to salute, though. But it’s evident to anyone who really looks that the baby-faced Harold isn’t cut out for the military, so his mother sets about trying to get him married. To do this, she uses a computer dating service, filling out the forms for her preferences rather than Harold’s.

And then Maude (Ruth Gordon) shows up. As it turns out, both Harold and Maude like going to funerals. Harold likes them because he’s obsessed with death. Maude likes them because they are part of the grand dance of life—endings and burials that, in her philosophy, become new beginnings as the people that were turn into something new. Maude is a movie character—she steals cars for fun and drives around in them, figuring that if she gets caught, well, she’s a few days away from turning 80 and no one will press charges. Maude is a free spirit, doing whatever she wants whenever she wants, and she takes an immediate liking to Harold. In fact, at their third funeral together, she steals Harold’s hearse and offers him a ride in it.

In truth, Harold and Maude is not that different from a lot of films in its basic story. We have a stuffy, overly uptight guy who lives in an incredibly repressive environment who meets a woman who is free from all earthly concerns who teaches him to lighten up and not take everything in his life so seriously. It’s a film everyone has seen at least once. There are several important factors that make this film different from the rest, though.

First, Harold and Maude has a wicked sense of humor. Harold’s practical jokes and fake suicides are highlights of the film, many of them playing into the scene of the moment. As his mother fills in the computer dating form, she reads aloud, “Do you sometimes feel that life isn’t worth living?” as one of the questions to answer. While she fills in the neutral response, Harold is loading a pistol, which he will eventually use to “shoot” himself. He scares off a couple of his blind dates with faked suicides and accidents as well, almost as tests to see how they’ll react to what he’s doing.

Second, and importantly, most films don’t have Bud Cort. Cort is an example of perfect casting for this film. In addition to having the mannerisms of demeanor of a repressed guy on his way to full blown neuroses, he has the face of a child and the eyes and soul of an old man. There is a depth of sadness in Harold, an ocean of frustration, and these qualities flow out of Cort’s eyes through the entire film.

Harold and Maude is funny and silly, and like anything that is filled with life, it’s also filled with pain, tragedy, and sadness. Because of this, it’s a wonderful movie. It’s a bit predictable, and Maude is perhaps too much the untamed flirt in an old woman’s body, but there’s a joy here that’s difficult to ignore. And it works, because the joy is touched with enough reality to ground it, and to remind us that joy is temporary because life is temporary, too.

Why to watch Harold and Maude: It’s funny as all hell.
Why not to watch: Septuagenarian bedroom antics.
Posted by SJHoneywell at 11:49 PM