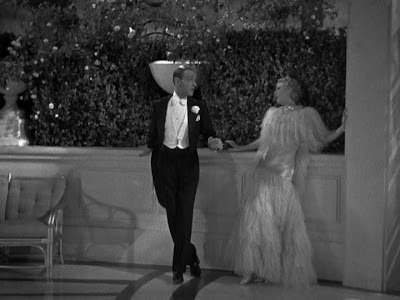 In my family, there are two schools of thought when it comes to dance on film. One school of thought is that Gene Kelly was the greatest dancer to ever put on a pair of tap shoes (my position). The other is that no one was ever better than Fred Astaire (the position of my wife and kids). In truth, the two men are almost not comparable since their styles were so different. Fred Astaire was all refinement and elegance, class on two legs. Gene Kelly was pure athleticism and muscle. An American in Paris and Singin’ in the Rain are the finest examples of Kelly’s style. For Astaire, one need look no further than Top Hat, one of the finest examples of Astaire and Rogers ever created. And while I prefer Kelly’s more masculine, muscle-y style, There’s no getting around the fact that no one tapped like Fred Astaire.

Top Hat is a comedy of love and mistaken identity, a Shakespearean tale with a soundtrack. Jerry Travers (Astaire) is an American dancer in London to star in a new show produced by Horace Hardwick (Edward Everett Horton, best known in my generation as the narrator of Fractured Fairy Tales on the Rocky and Bullwinkle Show). Hardwick’s wife Madge (Helen Broderick) is in Italy, expecting Horace and Jerry to come visit. It seems that she has a little matchmaking plan to hook up Jerry and a young friend named Dale Tremont (Ginger Rogers).

Unfortunately for Madge’s plans, Jerry and Dale have already met. During a particularly active bit of dancing in Horace’s apartment, Jerry manages to wake Dale up, since she lives in the room below. Jerry is immediately smitten with Dale and pursues her around London, much to her chagrin. The biggest part of this chagrin comes from the fact that Dale is already being aggressively pursued by Alberto Beddini (Erik Rhodes), a clothing designer. Through a crazy bit of chance, Dale becomes convinced that Jerry is actually Horace, and is thus repulsed that the husband of her friend is pursuing her romantically. And much dancing, singing and hilarity ensues.

Really, Top Hat is very much typical of early musicals. The plot is simple and follows a formula that only bad modern movies do—the plot could be easily resolved halfway through if one person let Dale know that Jerry and Horace are different people. That’s it. But, while this plot drives me mad in current movies, it’s only fair to give a little more license for a film made in 1935. And really, the plot isn’t the focus here. No one goes into this film (or really many of the other Astaire/Rogers films) because of the scintillating plot. It’s really all about the dancing.

And boy damn howdy! The dancing is dandy fine! No, really—it’s some of the best dancing committed to film. It would be great to see some of this in color to add to the spectacle, because there’s a hell of a lot of spectacle in black-and-white. The big finale is The Piccolino at the end of the film, but the ones everyone remembers are “Top Hat, White Tie, and Tails” and “Cheek to Cheek.”

Another sell point of the film is the script, which is pretty tasty. There are a number of solid one-liners throughout the film. Beddini is essentially a comic character with his incomplete mastery of English, but it is Horace’s manservant Bates (Eric Blore) who gets a lot of the good lines and comic moments. He’s a step south of Jeeves, and almost as funny as anything Wodehouse ever wrote, and that’s saying something.

At the end of the day, Top Hat is a pleasant little nothing of a film that exists more or less as a showcase for what Fred Astaire could do in a pair of tap shoes and what Ginger Rogers could do with him. And you know what? That’s really more than enough. The plot is just involved enough to remain interesting and a reason to watch the film, and the dancing is just so damn good that nothing more is needed. It’s cute and sweet, and more than anything, it’s one of the reasons Fred Astaire is still considered one of the greatest dancers in film history.

Oh, and a little bit of trivia--that's Lucille Ball as the assistant in the flower shop.

Why to watch Top Hat: Fred Astaire and Ginger Rogers need to be seen to be believed.
Why not to watch: It’s kind of dippy in the modern world.
Posted by SJHoneywell at 11:40 PM