How Many Boobs Do You Need? 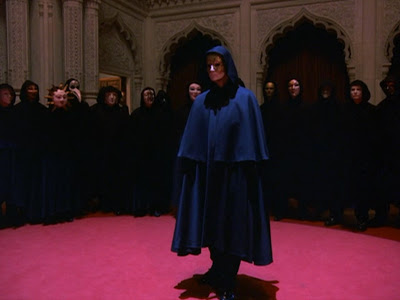 Once upon a time, Nicole Kidman was a beautiful woman. I’m not sure precisely when she changed from beautiful woman into a botoxed mannequin with a frozen expression, but it happened sometime within the last few years. Evidence for just how damn pretty she was can be found in Eyes Wide Shut, Stanley Kubrick’s last film.

Dr. Bill Harford (Cruise) and his wife Alice (Kidman) are invited to a party being held by their friend Victor Ziegler (Sydney Pollack). During the party, Bill recognizes a former medical school colleague named Nick Nightingale (Todd Field) playing the piano; we also learn that Nick dropped out of med school. During the party, Bill and Alice get separated. Alice dances with a charming and mildly seductive Hungarian named Sandor Szavost (Sky Dumont), who makes no secret of the fact that he would very much like to take her off in a private room and have his way with her.

At the same time, Bill is being aggressively pursued by a pair of nubile young women. Just as Bill is seriously reconsidering his marriage vows, he gets pulled away. It seems that Victor has already reconsidered his marriage vows, and the young woman (named Mandy, and played by Julienne Davis) he’s been sexing up has had a very bad reaction to the drugs she’s been shooting.

And so neither of the Harfords breaks their marriage vows, at least at this point. As Bill and Alice talk, though, it becomes an argument about the party. Bill is convinced that Alice would never be unfaithful to him, but she relates a story to him about a fantasy she had involving a young military man she saw on a previous vacation. And suddenly Bill becomes obsessed with thoughts of his wife’s possible infidelity.

From this point forward, Bill sinks into a world of sex. Significantly, he runs into Nick again, who tells him of a gig he has been taking regularly. An hour before his performance, he is given an address and a password. He goes and plays the piano, but must play blindfolded. At the last performance, the blindfold slipped, and he intimates that what is going on is a crazed sex party. Bill gets the password and runs off to find a costume, since everyone at the party wears cloaks and masks. At the costume shop, he discovers the owners daughter having sex with two Japanese gentlemen, and we discover later that the shop owner is essentially prostituting his daughter (Leelee Sobieski).

And then shit gets really strange. Rather than get too detailed, let’s just go with this: sex, threats, death, more threats, disappearances, nudity, and sex.

This is a film that can be interpreted in any number of ways, I think. Certainly one can look at this as a sort of dark fantasy of Bill’s triggered by his wife’s mental infidelity. It does play that way in many respects—the fantasy that pushes Bill into this particular situation is both sexually interesting and arousing (the orgy) and sexually emasculating (Alice’s dream of having sex with countless men while Bill watches helplessly). But in many ways this can be interpreted as Alice’s dream as well. The frequent black-and-white shots of her having sex with the naval officer could easily be interpreted has her fantasy and not Bill’s thoughts.

It’s an interesting film in the sense that Kubrick is obviously using sex as the draw here, and there is a shit-ton of full-frontal female nudity in this film. I can easily see a bunch of guys watching it, or at least fast-forwarding to the “good parts” for the acres of boobs in the middle of the film. But Kubrick, while certainly willing to use those acres of boobs to get people into their seats, is certainly investigating more here. I’d suggest that regardless of whose dreams we are seeing here, this film is really in many ways looking at the sort of spiritual malaise of this group of insanely wealthy people who are evidently bored with their own existence. The sex is a cover for people looking for something more and grasping at sex. Alice and Bill need to work their way through this, or need to rediscover their own relationship, to survive.

Interesting and weird, but not my favorite Kubrick. Ultimately, the sex and the nudity becomes something not titillating, but grotesque. Of course, that may well have been the point after all.

Why to watch Eyes Wide Shut: Damn sexy, at least up to a point.
Why not to watch: It’s much longer than it needs to be.
Posted by SJHoneywell at 11:50 PM