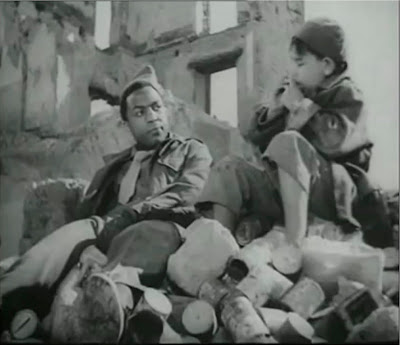 Roberto Rossellini’s war trilogy is an achievement of no small proportion. These films have a feel of reality to them that other war films of the day did not attempt, opting instead for straight propaganda and nationalism. Rossellini instead depicted real stories of people dealing with war and dealing with the tragedy of invasion, bombs, death, occupation, and seeing the horror of their world destroyed.

Paisa (Paisan) is less a movie and more a connected series of short films. The connection between these short films is tenuous at best—they don’t have continuing characters or a connected plot. Instead, they are snapshots of events and lives that take place in Italy during the Allied invasion and campaign from the southern reaches up through the north. Each story takes place in a specific place and concerns a small group of people dealing with the horrors going on around them.

As might be expected from the non-propaganda nature of this film, these are not happy stories. These are shorts that all express the extreme loss and anguish of war rather than the glory and nationalistic pride. There is frequent death and destruction, and in most of the films, the protagonists don’t get what they desire, but see their hopes dashed. Only the second film has anything like an uplift, and even that is closer to depressingly neutral—charity not from a desire to do good but charity because reality is so bleak. Each of these stories ends essentially with the moral that war is a terrible reality.

The stories (minus spoilers) are as follows:

1) A recon group of Americans enters a small Sicilian village and needs to find a way past a German minefield. They are led by a young woman named Carmela (Carmela Sazio). She and a soldier named Joe (Robert van Loon) wait behind for the rest of the troops and are surprised by a German patrol.
2) In Naples, an American soldier named Joe (Dots Johnson—not the same Joe) encounters a street urchin named Pasquale (Alphonsino Pasca), who steals his shoes. Joe looks for Pasquale to get his shoes back.
3) A soldier named Fred (Gar Moore) meets a young woman named Francesca (Maria Michi) in Rome. They spend a night together. Six months later, when Fred returns, Francesca has become a prostitute.
4) A nurse named Harriet (Harriet Medin) is working near Florence when she hears of a rebel leader named Lupo. She learns that Lupo is a painter she knew, and she heads into the warzone to look for him.
5) Three American chaplains spend the night in an Italian monastery. Later, the monks realize that only one of the chaplains is a Catholic; the others are a Protestant and a Rabbi. This realization causes conflict.
6) American operatives working behind enemy lines are captured, along with a group of partisans. While the operatives are protected by the Geneva Conventions, the partisans are not.

What Rossellini has done here is present war not as an adventure story, or as the greatest horror of mankind, or as really anything more than what it is: a traumatic event that affects the lives of millions of people in many different ways. While these stories are all fictional, all six of them have a ring of truth to them, as if they were somehow related to Rossellini at some point and presented here with little to no fictionalization.

It’s reality placed on film, or at least as close to reality as film can produce. That it’s depressing is a function of the subject matter, not Rossellini’s deft work behind the camera.

Why to watch Paisa: Real stories expertly filmed and real pathos brilliantly told.
Why not to watch: War minus propaganda isn’t uplifting. It’s depressing.
Posted by SJHoneywell at 10:08 PM