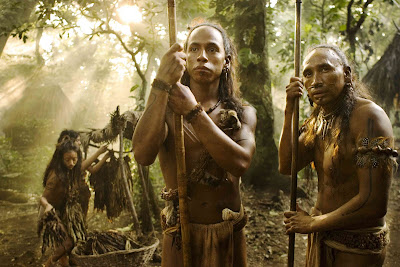 There are a lot of things that can be said about Mel Gibson. We could say, for instance, that he had one of the great Hollywood careers in the ‘80s and ‘90s. We could say that in recent years he’s shown a tendency for crazy behavior, excessive drinking, misogyny, racism, and anti-Semitism. But what we cannot say is that the man doesn’t have a pair of balls on him. How else to explain Apocalypto? How else can we explain a film with a $40 million budget filmed in Yucatec Mayan? He needed balls simply to pitch the concept. Of course it helped that his previous foreign language film (The Passion of the Christ) was the highest grossing R-rated film, highest grossing foreign language film in the U.S., and highest grossing religious film worldwide. That gives a man a little bit of leverage.

But Apocalypto doesn’t have that sort of guaranteed religious fervor tie-in that Passion did, since it features not the center of a major world religion, but Mayans living in the Yucatan. These people live an essentially peaceful existence, relying on the forest around them to provide everything they need. We meet initially the men of the tribe, who are hunting tapir. These men are Jaguar Paw (Rudy Youngblood), his father Flint Sky (the awesomely named Morris Birdyellowhead), Curl Nose (Amilcar Ramirez), Cocoa Leaf (Israel Rios), Smoke Frog (Israel Contreras), and Blunted (Jonathan Brewer). Blunted gets teased a lot by the others because he has yet to get his wife pregnant. Back in the village, we meet a few other folks, in particular Jaguar Paw’s wife Seven (Dalia Hernandez) and his son Turtles Run (Carlos Emilio Baez).

Everything changes when we meet a group of refugees fleeing from their own village. Jaguar Paw’s village is attacked the next day. During the attack, he lowers Seven and Turtles Run down into a deep hole near the village, leaving a vine hanging down so they are not abandoned. He returns to the village to fight, but is captured. Flint Sky is killed in front of him by Middle Eye (Gerardo Taracena), and Jaguar Paw and the surviving members of his village are led off. Before going, one of the invaders cuts the vine leading down to Seven and Turtles Run, stranding them.

Essentially, the village is being dragged off to a massive Mayan city where they are to be sacrificed to the sun god. A couple of Jaguar Paw’s friends are killed by having their hearts cut out and then their heads cut off. This all coincides with an eclipse just as Jaguar Paw himself is on the altar. The sun god being satisfied with blood, the surviving members of the village are allowed to try to escape, but are hunted down. Jaguar Paw is wounded, but kills the son of the enemy leader, Zero Wolf (Raoul Trujillo). Jaguar Paw runs home to save his wife and son, and is pursued the entire way.

There are many references to other films throughout this one. Jaguar Paw’s “rebirth” from the deep pool of mud is highly reminiscent of Apocalypse Now for instance. Jaguar Paw’s jump off a high waterfall calls back to The Fugitive, and his speech on the shore below contains shades of Arwen in The Fellowship of the Ring. But throughout the entire second half of the film, what I am reminded of more than anything is The Naked Prey.

Regardless of this, there are a number of things to talk about with Apocalypto without specifically comparing it to something else. It is, ultimately, extremely melodramatic, with points of danger seemingly added simply to heighten the intensity of the given situation, in many ways unnecessarily. For instance, as Jaguar Paw nears his home village, it begins to rain, and the deep hole in which Seven and Turtles Run are standing begins filling up with water at an incredibly fast rate. And then, suddenly, it’s time for Seven to deliver the baby. All we need is a train track for her to be tied to and for Zero Wolf to have a Snidely Whiplash mustache to twirl.

Despite this, there’s still plenty here to like. The acting is excellent throughout. Middle Eye is absolutely menacing and vicious. There’s a definite sense of evil from him as he hurts and kills other not for gain but purely for sport. Similarly, Zero Wolf casts a long shadow over the film as a source of fear and malice. Most impressive is the massive ziggurat set that is both magnificent and terrible.

Apocalypto is plenty violent as well, but the violence here all makes good sense. This is not prurient stuff or something to satisfy the bloodlust of the audience, but realistic violence intended to give the audience a real sense of the incredible danger of this world. Even during times of peace, this forest is a dangerous place to live. Wounds are easily gotten and can kill in a non-sterile environment. Danger lurks everywhere. The violence is not the indicator of this reality, but a symptom of it.

Be prepared for a lot of body modification. If the idea of people having bones through various facial features, large tattoos, ritual scarification, and hugely stretched earlobes is a turnoff for you, you’ll have some issues here. Everyone has some pretty big earlobe plugs in—even Turtles Run has holes you could put a couple of fingers through, and many of the people have multiple nasal piercings as well as piercings below the lower lip. If you’re into that kind of thing, this won’t bother you at all. If this sort of thing gives you the shivering Willies, though, stay clear.

Why to watch Apocalypto : Beneath all of the strangeness lies a solid story.
Why not to watch: Disturbing piercings and ritual scarification.
Posted by SJHoneywell at 11:12 PM