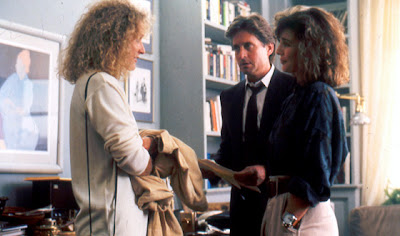 I have something of a history with the film Fatal Attraction. This is not an admission of marital infidelity on my part, nor on stalking someone else. Back in the dark ages, when VHS was the medium of choice, Blockbuster still existed as a going concern, and my wife and I were just dating, we rented this movie. We took it back to her place and we sat down on her basement couch to watch. We got about 30 minutes into the movie before Sue completely wigged out and demanded that I shut the film off. I did, rewound the tape and returned it. Since that day, probably 1988 or 1989, I haven’t so much as touched the box of a copy of this film until now.

But hey, it was time to watch it finally. The story is one you almost certainly know by reputation if not experience. A lawyer named Dan Gallagher (Michael Douglas) has a one weekend affair with a book editor named Alex Forrest (Glenn Close). Thinking it’s over, he goes back to his wife, Beth (Anne Archer) and daughter, Ellen (Ellen Hamilton Latzen). But it’s far from over. Little did Dan know when he hooked up with the sexy book editor that she was infected with a case of the crazies, and shit’s going to get real.

Fatal Attraction is not the first stalker movie by a long shot. There are plenty of movies with someone completely obsessed with the affections of someone who doesn’t quite return the sentiment. It’s not even my favorite stalker movie—that’s Play Misty for Me, and the woman obsessed with Clint Eastwood in that film is just as deranged as Alex Forrest in many ways. Fatal Attraction, though, goes places no films before it ever did. This film pushed the crazy stalker envelope in ways that, based on how incredibly popular this film became, everyone was ready to see.

See, right away we learn that Alex is a few slices short of a full loaf when she tries to kill herself because Dan prepares to go home after their night of bouncy-bouncy. From this moment on, things are going to get weird. Like we expect it to, it starts nice and slow—phone calls at work, calls to the house, hang-ups when Beth answers, and similar tactics. And then things escalate. She tells Dan she’s pregnant (and she evidently really is), destroys the electrical system in his car, and begins a campaign of harassment that is truly epic in scale.

So I’m going to talk about the rabbit. Everyone knows about the rabbit. People who haven’t seen this film know all about the rabbit. While it’s a terrifying and awful moment in the film, it’s also a truly brilliant one. The reason it’s such a great moment is that it shows us very definitely just how unhinged Alex has become and exactly what she is capable of. While things were weird up to this point, once that happens, all bets are off. Alex Forrest goes from being someone a little obsessive and stalkerish to someone capable of virtually anything.

The film does raise some pretty interesting questions, though. On the one hand, no other film in history has done more for the idea of marital fidelity than this one. Any guy who saw this film and thought for a moment about cheating had second thoughts. Part of this is because Alex was bat-guano-sandwich-eatin’ crazy. Part is because every guy in the world secretly believes that he has the same sort of animal magnetism as Michael Douglas, and thus every woman would immediately go bonkers over him. I kid, but only a little.

What’s more interesting, though, is the feminist reaction to this film. Fatal Attraction. When the film was released, there was a huge feminist outcry against the film. Alex Forrest is an unmarried woman, a woman who has evidently sacrificed family for career…and she’s crazy. It’s fair to say that I didn’t get that reading from the film. I see it, and I understand why some people were upset. What it comes down to is how you take that character. Is Alex Forrest a crazy career woman? Or is she a career woman who happens to be crazy? And, accompanying this is the fact that the stay-at-home mom proves to be the one who fights to keep her family and sanity, and all that. So I see the anti-feminist position. I just don’t think it was intended.

What’s more impressive is how well the film addresses one of the main reasons that people cheat. When Dan and Alex hook up, it’s very much like the start of a new relationship when everything is exciting and new. Your partner, assuming you have one, was never more perfect in your eyes than in that first month or so when you were still discovering everything there was to know about each other. There’s still an effort made to impress—you’re the best version of yourself at those times. But that sort of excitement can’t last, because it would kill us. If we’re lucky, it fades into things like intimacy and comfort and companionship.

But that thrill definitely dies off. When he decides to spend the night with Alex, what Dan thinks is exactly that—that thrill has suddenly returned. It’s back, at least for the weekend, and he can return to comfort and intimacy. In those moments, Alex is (in his mind) perfect. She’s still dressing to impress and looking her best; she’s probably wearing sexy underwear and not something that’s been washed 100 times. She won’t fart in bed, eat garlic, or pick her toes. For that moment, she’s as close to perfect as she’ll ever get. We get this early in the film when it looks like there’s going to be a little boom-boom between Dan and Beth, and he returns to the bedroom to find his daughter in bed. Comfort, sure. Intimacy, yes. Sex? Not so much. And thus Alex becomes that outlet, if only for the weekend.

That said, it’s worth noting that anybody who goes straying when he’s coming home to the 1987 version of Anne Archer is an idiot. Dumbass deserved something just for going there.

Why to watch Fatal Attraction: Because it’s a great example of the crazy.
Why not to watch: You’ll never look at hasenpfeffer the same way again.
Posted by SJHoneywell at 2:38 PM