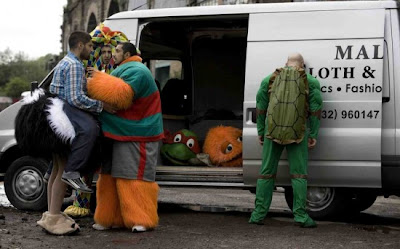 It’s been just over 10 years since the attacks on the World Trade Center and the Pentagon. People tend to pay special attention to those anniversaries that end in 5s and 0s, and so the mood of the States was pretty somber a few days ago. On a completely unrelated note, the newest edition of The Book was released, adding back a dozen or so films and bringing in 10 new ones. So, in an effort to combine the recent anniversary and the release of the 8th edition, as well as my own twisted sense of humor, I watched Four Lions.

Let’s get this stated right off the top: this film is a comedy about suicide bombers. Roll that around in your brain pan for a couple of moments and then come back to me. I’ll wait here until you come to terms with that concept.

Back? Excellent. Let’s move on. We start with a group of four jihadist wannabees. They are led, or at least somewhat guided, by Omar (Riz Ahmed). Also in the group is militant Barry (Nigel Lindsay), who is more eager for personal control over the group but can’t understand subtleties; Faisal (Adeel Akhtar), who wants to train crows to carry bombs so he doesn’t have to blow himself up; and Waj (Kavyan Novak), who has real issues with things like thinking. The four believe in a militant version of Islam and would like to bring the jihad to England, blowing themselves up in the process.

To help them pursue this goal, Omar and Waj head off to a training camp in Pakistan where they hope to meet an emir to get permission to blow up targets in the U.K. The training goes poorly, though, when Waj takes video with his phone, allowing his location to be tracked. While the rest of the camp runs off to meet the emir, Omar and Waj attempt to blow up an American spy plane, but Omar aims the rocket the wrong way and instead blows up the emir (and this is referenced at the end of the film). Back in the U.K., Barry enlists a fifth member named Hassan (Arsher Ali), who disrupts a Muslim conference with a fake bomb strapped to his stomach.

Omar and Waj return and now are forced with having to talk Barry out of his new master plan: blow up a mosque pretending to be someone else to ignite the passions of the moderates and thus start the jihad. Omar must deal with this problem, but is confronted with a more serious one when Hassan invites the next door neighbor over for a dance party in the same room where the men are creating their bombs. When transporting the explosives, Faisal trips over a sheep and explodes, which naturally causes a rift in the group. Eventually, they reform and decide to attack the London Marathon dressed in a variety of costumes to conceal the bombs.

Naturally, this subject matter is incredibly touchy, and director Christopher Morris needs to tread lightly to make it something more than extremely painful. He doesn’t. Instead, he charges directly into this topic and stomps around like a mad elephant. It’s a smart move, because it’s in many ways unexpected. Because it is so extreme, it works.

It also works in that the characters are well realized, even if they are obviously movie characters because of their extreme personalities. Everyone knows someone a bit like Barry, for instance. Barry is sort of constantly confused, or at least blinded by what he thinks is right. His initial plan of blowing up a mosque is sort of interesting—it’s a false flag plan designed to put suspicion elsewhere and get the moderate Muslims angry. But even after the group decides to do something else, he makes videotapes of himself claiming responsibility, and thus negating any possible effect of the false flag. He also doesn’t see a problem with this. Waj is a step above mentally retarded, gets confused and lost easily, and seems to equate going to paradise to be the equivalent of a theme park ride called “Rubber Dinghy Rapids.” In fact, Barry regularly calls Waj “the special needs donkey.”

There is, of course, a large streak of cruelty in this film, and it needs that. The humor is pitch black dark, and successful because of it. But the real reason this film works is because of how it looks at this deadly serious and dangerous topic.

All of the men—Omar, Barry, Waj, Faisal, and Hassan—want desperately to be jihadists and to die gloriously for the Will of Allah. All of them desire to go to paradise and be seen as martyrs for the cause of Islam. But none of them, were you able to pull the characters out of the film and ask them about it, could tell you precisely why. They have only vague notions and ideas, and most of those come from people other than them. None of them could put into words the ideas and desires they are trying to express, and so their method of expression becomes suicide bombing. They want to do it, but have no concrete reason beyond wanting to, or thinking they should, or, as Waj puts it at one point, because “it would be pathetic to cop out now.”

Truthfully, American audiences will have a tougher time with this film because it is very British. The accents can be difficult at times, and many of the references (Honey Monster?) aren’t known or obvious to those of us on this side of the pond. And, even for those of us with a good ear for accents and a fondness for British culture, there are those who will find the material to be objectionable. That’s to be expected. This is not a film for someone who was directly affected by the 9/11 attacks, because there will be things in their lives that they cannot laugh at ever.

But in truth, Four Lions goes to prove the old idea that the best way to counter oppression, terror, and evil is not by open warfare, assassination, outrage, or political speech, but with humor. It’s humanizing and healthy to laugh at those things that scare us or that we can’t understand. Laughter takes away the weapon of fear and neutralizes it.

If you can separate the tragedy of any bombing attack from the comedy present here, you should enjoy this film tremendously.

Why to watch Four Lions: Scathingly funny.
Why not to watch: For some people, this topic will always be too soon.
Posted by SJHoneywell at 11:53 PM