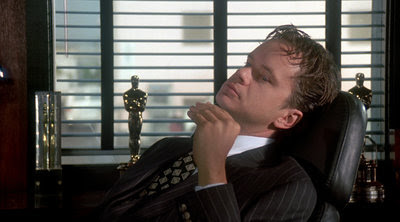 I can’t say that I dislike Robert Altman, but I often have trouble getting into his films. I think a part of that is that often he has these massive casts and films with multiple dozens of characters. I frequently feel overwhelmed by him. It’s been years since I’ve watched M*A*S*H, but I think part of the reason I can follow that film easily is because I used to watch the television show it was based on, so I knew the characters going in. I’ve tried and failed to watch both Short Cuts and Nashville and just haven’t gotten through them yet. So it was with some trepidation that I dropped The Player into the spinner today.

The Player is satire, and it’s self-referential satire. This is the story of a studio executive named Griffin Mill (Tim Robbins) who discovers that he has wronged someone, or at least that someone thinks he’s been wronged. He begins getting threatening postcards from a disgruntled screenwriter, someone that he promised he would call and never did. Simultaneously, he’s under the impression that he’s on the outs at his current studio, because he keeps hearing about Larry Levy (Peter Gallagher), who is an up-and-comer.

A little investigative work leads him to a screenwriter named David Kahane (Vincent D’Onofrio, who was thin once). Griffin tries to get Kahane to re-pitch the script to him, but Kahane balks, and essentially calls Griffin out for being a complete bastard. Push leads to shove, and Griffin kills Kahane, then makes it look like a robbery gone bad and flees the scene.

Now, on top of all of his other problems, he has a murder he needs to cover up. At the same time, he starts to become involved with Kahane’s pseudo-girlfriend, June Gudmundsdottir (Greta Scacchi), much to the irritation of his current girlfriend and scriptreader, Bonnie (Cynthia Stevenson). So, for the rest of the film, Griffin Mill needs to stay one step ahead of the police (Whoopi Goldberg and Lyle Lovett), keep tabs on Larry Levy, split his time between Bonnie and June, and rescue his own career.

One of the sells of this film is the incredible number of cameos. In terms of others playing actors, Fred Ward plays the head of studio security and B-movie mainstay Brion James plays the head of the studio. But throughout the rest of the film, there are quick appearances from about a third of Hollywood playing themselves. People show up at parties, appear in restaurants, make quick movie pitches or exchange pointless small talk. The list of extras reads like a Who’s Who in southern California circa 1992.

The Player succeeds on nearly every level. One way that it is truly successful is not in the strange threats against Griffin Mill (at one point, a rattlesnake is left in his car), but in his reaction to all of this. With his livelihood threatened, his relationship on the rocks, a murder to cover up, and the police tailing him, he exists in a world that for all intents and purposes seems like the inside of an opaque sphere. Mill continually and continuously acts as if nothing can touch him, like these situations that would concern others are beyond him. He puts a plan in place to keep his job, and this is far more important to him than the fact that he murdered a man in an alley in Pasadena.

And so, there are no heroes to cheer for in this film, and for once that doesn’t bother me. In fact, watching a couple of potential heroes’ story arc is, for me, one of the true highlights of this film. However, since this resolves very near the end and it’s worth seeing, I’d rather put this under a spoiler tag than simply talk about it.

Two screenwriters (played by Dean Stockwell and Richard E. Grant) appear in the second act to pitch a film called Habeus Corpus. They want the film to play with no known actors and to have an extremely downbeat ending. This is the film that Mill uses as his way to get back in with his studio—when Larry Levy screws things up, he’ll come in with the solution and save the picture. The two writers are adamant that they want the extremely downbeat end and that there should be no one recognizable in the film.

At the end, we see the latest rushes of the new ending. In the background we see Peter Falk and Susan Sarandon. Then we catch a glimpse of the stars, Julia Roberts and Bruce Willis. And we get a happy ending. Bonnie complains about the ending, and the two screenwriters, who earlier had been so set on having a realistic, serious ending, chime in that they’re fine with the ending as it is, because the sad ending tested so poorly.

In this moment, we see the depth and the price of the Hollywood machine. Integrity and artistic vision, regardless of all the speechifying throughout the film, goes by the wayside when it comes down to how much money the film will make at the box office. While it’s almost certainly an exaggeration, it’s also almost certainly very reflective of the truth. In my more cynical moments, I’d guess that if anything, Altman softened this moment from the reality.

The Player succeeds not despite the overwhelming smarm and palpable soullessness of all of the principle characters, but because of it. This is a film that would buckle under its own weight of pretentiousness if it tried to paint the characters as anything other than avaricious, vain, shallow, and awful. Tim Robbins is especially hateful, and because of it, especially good.

In short, it looks like I should give Altman more of a shot.

Why to watch The Player: The greatest skewering of Hollywood ever filmed.
Why not to watch: If you try to keep track of the cameos, you'll miss the movie.
Posted by SJHoneywell at 11:06 PM