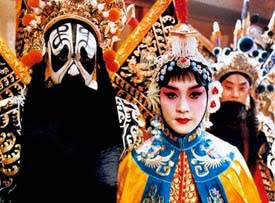 While I try to be as active as I can be at seeing things I am not familiar with, there are plenty of things in the world that I know little to nothing about. Chinese opera is one of those things. In fact, all I really knew about it before tonight is that it is highly stylized, much like Japanese Noh theater. The stories are traditional, and a good actor plays the part to a very specific standard. Ba Wang Bie Ji (Farewell My Concubine) exists in this world, and gives the audience a real view of it.

The view is one of intense brutality. Young children are taken in to be trained as actors and acrobats, and this becomes their entire life. The training is grueling, praise is rarer than hen’s teeth, and punishment is constant. A young boy named Douzi (Mingwei Ma) is taken to join the opera by his prostitute mother, but the opera will not take him because he has a sixth finger. The mother chops off the offending digit with a cleaver and takes him back, and he is accepted and his training begins.

The person he ends up training with the most is Shitou (Yang Fei). Shitou is trained in male roles and Douzi in female ones, essentially becoming a woman from all outward appearances. The two endure their life of brutal punishment and end up being stars of the stage in large part because of their performances of an opera called Farewell My Concubine. In this play, the king is abandoned by everyone, and he tries to send away those things and people that have stayed with him. The concubine commits suicide rather than exist without the king.

Where this goes is to a bizarre love triangle. It’s evident when Shitou and Douzi (as adults played by Fengyi Zhang and Leslie Cheung) are performing on stage, it’s less of a performance four Douzi. Also at this time, the two adopt stage names; Shitou is known as Duan Xialuo and Douzi as Cheng Dieyi. And this is where we need a femme fatale—and one arrives just when we need her. This is another prostitute named Juxian (Li Gong). Xialou tells an angry mob that the two of them are engaged as a way to calm them down. And he lives up to the promise he made. This impending marriage creates a huge rift between the two actors, and Cheng Dieyi.

Around all of this story, World War II, the Japanese invasion of Manchuria, the communist takeover and the cultural revolution occur, and all of these things have tremendous impact on the characters.

More than any of the other characters, this seems to be Cheng Dieyi’s film since all of the controversies either swirl around him or are at least tangential to him. His defining characteristics are his inability to forgive anything and his incredible ability to play the martyr card. He’s actually difficult to like; he seems to want to live a particular romantic ideal, even to the point of his own destruction.

It’s worth noting that there is a great deal of Chinese opera in this film, and that should not be surprising. And here’s the thing—Chinese opera is really hard to deal with if you aren’t used to it. The female characters sing in this incredibly affected style that is high-pitched and piercing and has the effect on me of nails on a chalkboard. It absolutely drove me to distraction. Fortunately, the rest of the movie is quite good and laced with tragedy and history that it kept my attention. But I was really ready to stop hearing these guys sing like elf women with nasal conditions. 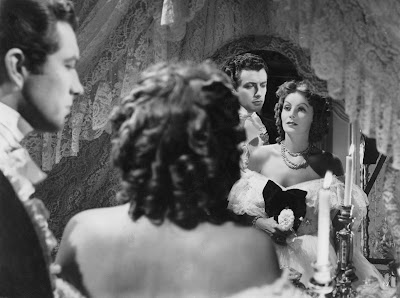 Camille is another film in which the road to love is rocky and the ending never seems like it will be cheerful. Marguerite Gautier (Greta Garbo) is a woman in mid-18th century France who lives essentially as a kept woman by making men fall in love with her. Her current target is a man named Baron de Varville (Henry Daniell), who has enough money to keep her comfortable for the rest of her life. This idea of “the rest of her life” is important, because Camille is sickly, and by sickly I mean that she is consumptive.

Unfortunately for Marguerite, she doesn’t quite get the results she wants when she meets de Varville. While he certainly falls for her and not her frenemy Olympe (pronounced o-LAMP and played by Lenore Ulric), she is instead captivated by a young man named Armand Duval (Robert Taylor). Armand doesn’t have the same sort of money that Marguerite needs, but he’s young, smart, and pretty. However, because she is a spendthrift and always in debt to everyone, she ends up having to become essentially the kept woman of de Varville.

And that’s really the story. Marguerite attempts to keep earning a living from de Varville while leading Duval on romantically. She’s essentially forced to make that age-old choice of comfort and money or love. And, of course, she is consumptive, but she’s consumptive in that mid-1930s Hollywood way in which she gets sicker as the movie progresses but always manages to look exactly like Greta Garbo at the height of her film career.

You know what? This film failed for me on almost every level. Camille is an offshoot of the “manic pixie dreamgirl” except that instead of being a free spirit, she’s just shitty with her money management skills because she’s far more intent on having a good time and being the center of attention. She’s a sort of low-grade Scarlett O’Hara. Additionally, Duval is a complete sucker and a sap, a man so deeply in love with the object of his affection that he’ll do anything for a minor sliver of attention. He gives guys a bad name. As a man I really just wanted him to grow a pair.

In fact the only character I really like is de Varville. It sems like he really got the short end on everything in this film. I feel badly for him.

Of course, the focus is on Marguerite, though, and she’s undeniably annoying throughout. She’s supposed to come off as fun loving and free spirited and whimsical with a touch of tragedy, and she instead comes across as completely fake and not worth spending a lot of time around. Sorry, old movies—this one falls flat and falls hard.

Why to watch Ba Wang Bie Ji: A story in China as it changed and changed again.
Why not to watch: Chinese opera is really hard on the ears.

Why to watch Camille: It’s a pretty little romance.
Why not to watch: Everyone in this film is annoying.
Posted by SJHoneywell at 11:58 PM