Buster Keaton is the most represented of the three best-known silent comedians on The List with five films. I’m fine with that, since he’s also my favorite of them. It’s with a little sadness that I’m writing up the fifth and final Keaton for this project. I simply couldn’t resist, though. I just can’t help myself. 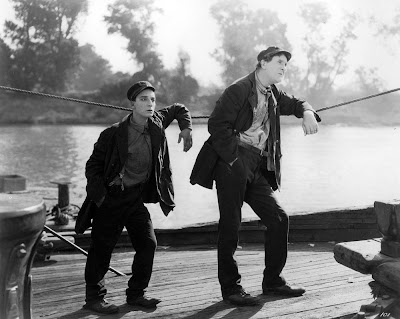 Steamboat Bill, Jr. is also the newest of Keaton’s films on the list, although in the case of silent movies, “newest” is a relative term. Importantly, though, it’s also a film that came after the commercial failure of The General and thus lost control of his films. Sadly, as will soon become apparent, this shows through in the final product.

The story, as is typical with silent comedy, is simple. Bill Canfield (Ernest Torrence) is a steamboat captain in Mississippi. Unfortunately for him, he’s got competition from a man named J.J. King (Tom McGuire), who happens to be the richest man in town and is thus able to purchase a much nicer steamboat. As it happens, Canfield’s son, who he hasn’t seen in years, has finished school and is coming for a visit. Naturally, this is Buster Keaton. And, as naturally happens in such films, Keaton is madly in love with Kitty King (Marion Byron), J.J. King’s daughter, and the feeling is mutual.

It’s not too difficult to see where this film is going. In fact, while the details may not be clear or obvious from the paragraph above, you almost certainly have an idea of what the last couple of minutes are going to look like, no?

While the first chunk of the film is all about the set up, it’s also loaded with sight gags and jokes, and there are some good ones, and one that references Keaton’s typical persona that is quick and brilliant. And, as is typical with Keaton, the big set piece stunts that make up the end of the film are essentially tangential to the actual film. A huge storm whips up and destroys the town, which sets up the necessary situation for the end of the film. That said, much of what happens is there simply to showcase Keaton’s virtuoso skills at stunts and comedy. The storm is one of those classic scenes that is referenced in films, especially the part when the house front falls down around him.

It’s also interesting that there are shades of Romeo and Juliet in this in that we are dealing with feuding families and children in love with each other. Of course, this is far more comedic and far less tragic, but there are times when it seems that Keaton is attempting to directly reference Shakespeare’s play.

Steamboat Bill, Jr. is a marvelous piece of footage because of all of the stunts and ideas in it, but it is lacking when compared with other Keaton films that I have seen. There is something less joyful about it somehow, less manic than his earlier films. Had you asked me a few weeks ago, I’d have said that Seven Chances was the least of the Keaton films I’d seen, but sadly that has to be revised to include this one.

So, while Steamboat Bill, Jr. might be the least of the five Keaton films on The List, it’s the least of five films that are Master’s classes in how to pull of sight gags, stunts, and comedy. Keaton’s been better, but Keaton at 70% is better than most.

Why to watch Steamboat Bill, Jr.: It’s Buster Keaton. Why wouldn’t you watch it?
Why not to watch: It lacks a lot of the joy of his earlier films.
Posted by SJHoneywell at 10:34 PM