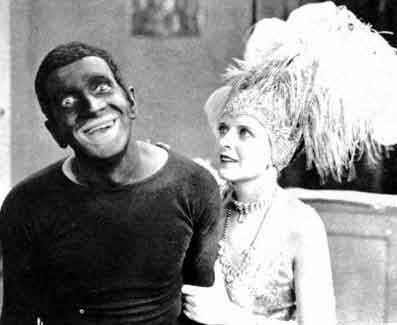 Fortunately, The Jazz Singer is more than simply an important piece of history. It’s also interesting in an of its own sake. The story is an old one. Young Jakie Rabinowitz (Bobby Gordon) loves to sing. This is a good thing, since his father is the cantor of his local synagogue and fully expects Jakie to follow in his footsteps just like he did his father’s, and his fathers’ before him. Jakie, though, has his heart set on singing ragtime and jazz, a truth that gets him kicked out of the house.

Years later, Jakie (now played by Al Jolson) has taken the stage name Jack Robin and is making a name for himself on stage. This is where he meets Mary Dale (May McAvoy), who he falls for immediately. It seems that Mary has a reputation of being unreachable, but it also appears that Jack has gotten through. When she gets her big break on Broadway, she sends for him to appear in a show with her.

And now is when the fun starts. Jakie goes home to visit his parents and performs for his mother, but he is summarily dismissed from the house by dad. Jakie Rabinowitz goes back to being Jack Robin and his show, and is not aware that his father has taken ill and now lays in his bed. And we come to the crux of the problem—opening night for his big break on Broadway happens to be the same day as Yom Kippur, the most sacred day of the Jewish calendar. With his father ill, the synagogue has no cantor. The performer must now decide whether he is Jakie Rabinowitz, son of the cantor ready to take his father’s place or Jack Robin, the great jazz performer.

And that’s really it. It’s a simple tale about a man’s difficult choice between the career he loves and has worked for all his life or the duties of family and religion.

The film is notable mainly because it’s the first film to use synchronized sound. Jolson performs a number of songs, and in a couple of spots speaks, notably about 15-20 minutes in when he says, “Wait a minute, wait a minute! You ain’t heard nothing yet!” However, except for this moment and a conversation with his mother in the middle of the film, the rest of the film is played as a silent, complete with flapping mouths and a bunch of intertitles.

The film is also notorious for the performances in blackface. It’s interesting how morals and morality changes over time. When Jolson performed this film, the minstrel show standby of white performers playing in blackface was nothing new and nothing notable. Today, it’s immediately seen as a slap against the African American community. What it truly is is simply a stylized way for Rabinowitz/Robin the character to further distance himself from his Jewish background, something potentially just as fatally non-white in the 1920s.

It seems strange to say this, but the two blackface performances, both of which occur near the end of the film, are almost respectful in their tone. They are certainly not especially racist; Jolson doesn’t imitate stereotypical “black” mannerisms, talk in an uneducated fashion, or really do anything but come on stage and belt a couple of numbers.

But ultimately, this is something of a shoulder shrug of a film. Were it not for its incredible historical impact, no one would care much about it anymore. Sound, it can be easily argued, is the biggest advance in film since the creation of film, and this is the movie that led the way. And that’s all it is—a simple tale told elaborately for the time. I’m glad to have seen it for its importance, but don’t really have much of an opinion on it otherwise—it’s important for what it is, not for the story it tells.

Why to watch The Jazz Singer: History, pure and simple.
Why not to watch: It’s credited as the first talkie, but there’s not a lot of talkie.
Posted by SJHoneywell at 11:16 PM