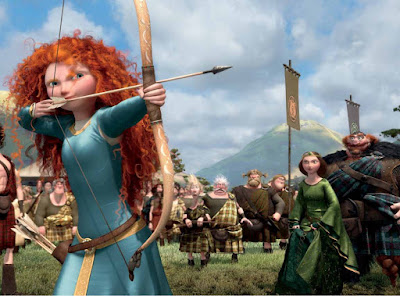 I’ve seen almost everything ever produced by Pixar, and I’ve gotten one step closer now that I’ve watched Brave. I’ve been sort of warned about Brave, that it’s not of the same quality as other Pixar films, or at least that there are a number of Pixar films better than this one. It’s unfortunate to go into a movie with a preconceived notion, but when it comes to movies from this branch of Disney, it’s hard not to know what almost everyone thinks right away.

So, as the last person in North America to watch Brave, I’ll be quick with the recap. Merida (Kelly Macdonald) is a young Scottish princess who chafes at the role she is forced to play. She’d rather shoot arrows and run about. She clashes frequently with her mother Elinor (Emma Thompson) about her behavior and seems to be otherwise tolerated by her father King Fergus (Billy Connolly).

The time comes, though, that Fergus calls the clans together because Merida has reached an age where she needs to marry. It’s political thing, there to help bolster the unity of the clans, but the three suitors all appear pretty unsuitable to Merida. It’s up to her to pick the contest that the three will compete in for her hand, so she chooses archery. And then, since she is the oldest child of her clan, she “competes” for her own hand and shows up all of the potential suitors. This causes a great deal of embarrassment for the other three clans and also starts a fight between Merida and her mother, a fight that ends in a torn tapestry.

Merida flees the castle, and guided by the sudden appearance of little blue will-o’-the-wisps, she reaches the cottage of an old witch (Julie Walters). Here Merida gets a cake that she is instructed to feed to her mother to change her fate. She does, and the cake turns Elinor into a bear. More specifically, she’s turned into a bear that looks an awful lot like the bear that took Fergus’s leg years before. So now, Elinor has to figure out how to change her mother back into her mother, keep her father from finding out, and most especially keep her father from seeing the bear and trying to kill it. Adventure and family reconciliation ensue.

The sad truth is that most of what I’ve heard about Brave is true, although it’s less dire than a lot of folks have painted it. This is lower-middle range Pixar, but it’s still Pixar. Brave isn’t a terrible movie by any stretch of the imagination, but it’s also far from a great one, and far from the sort of film that Pixar is capable of producing and has produced over and over again. It’s certainly better than their worst films, but it’s nowhere near the level of Pixar when it’s really running on all cylinders.

There are some things that Brave does right, though. First, any film that gives voice work to the great Billy Connolly can’t be all bad. I recognized him on his first line and was pleased to be spending some time listening to the man talk. Emma Thompson is good as always. In fact, the voice work is as good as expected from a Pixar production. Pixar has always gotten good work out of a talented cast, and this is no different.

I also rather like the character of Merida. There are two potential Disney princess clichés, and she sidesteps both of them fairly well if not perfectly. She is definitely not waiting around for a prince to save her, and so there’s a positive message there. Merida is capable of being the heroine of her own story. But she’s also not the total tomboy opposite. There are elements of that in her and she may rebel against the restrictive dress her mother puts her in, but she’s also not running around in leggings and covered in mud. She’s definitively female without being girly and without being butch.

It’s also visually appealing. Pixar has always pushed the envelope for animation, and there’s a lot of great work here, particularly in Merida’s hair. Frame for frame, it looks as good or better than any other animated film out there.

My issue is that the main thrust of the story seems forced. The whole “mom turns into a bear” thing feels like retread, and not the sort of unique take on an old story that Pixar does so well in so many other films. It’s perhaps too expected. Worse, it hearkens back to Brother Bear, which is never a good thing for any movie to do.

There is a way to tell the story being told here without witches and magic spells. That would have been the movie I’d have liked to have seen. Brave isn’t a bad film, but it’s not going to ever be remembered as a great one simply because we’ve all seen Pixar do it a lot better. It's the most Disney of Pixar's films, and not really in a good way.

Why to watch Brave: It’s Pixar!
Why not to watch: Almost all other Pixar films are a better choice.

Posted by SJHoneywell at 3:33 PM