Film: A Patch of Blue
Format: Streaming video from TCM Watch on laptop. 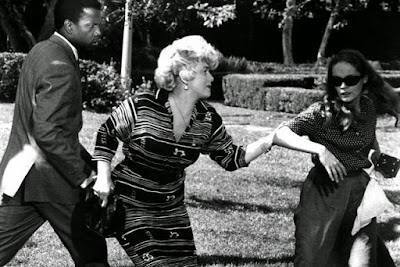 A Patch of Blue is a film that is very much a product of its time. That’s true of all movies, of course, but in this case, there’d be no reason to ever remake the story. A Patch of Blue is the story of an abused and socially oppressed blind girl who is befriended by a kind office worker. That doesn’t sound like much, but in this case, the blind girl is white, the office worker is black, and this is 1965.

Selina D’Arcey (Elizabeth Hartman in her debut role) is blind and lives almost the entirety of her life within the confines of her tiny apartment. She shares this apartment with mother Rose-Ann (Shelley Winters, who won the Supporting Actress Oscar for the role) and her grandfather Ole Pa (Wallace Ford). Rose-Ann makes something like a living as a prostitute, while her hobby seems to be making life as terrible for Selina as she can. Ole Pa isn’t much better; he is similarly abusive of Selina although not to the same extent, but his alcoholism makes him an ineffectual guardian at best. Selina spends her days stuck in the apartment doing chores and stringing sets of beads for Mr. Faber (John Qualen) as a way to supplement the family income.

Rose-Ann’s abuse of Selina is absolutely sadistic to the point of melodrama. There is not a single bit of abuse that you might consider including in a movie about a woman abusing a blind girl and it’s here. Eventually, Selina pushes for her right to go sit in the park, promising to do twice as much work on her bead stringing if she’s allowed to go. It’s here that she meets Gordon Ralfe (Sidney Poitier). Gordon is intrigued by Selina, mainly because she has evidently never been outside of her apartment much and doesn’t seem to know anything.

Selina starts spending her days in the park and meeting with Gordon every day. Gordon starts to show her the wider world, introducing her to new things and learning about Selina’s melodramatically tragic life. For instance, he learns that she was blinded by Rose-Ann, who was visited by Selina’s father while Rose-Ann was “entertaining” a “guest.” Selina’s blindness happened when Rose-Ann hurled some undetermined chemical substance at Selina’s father and hit Selina instead. He also learns that one of Rose-Ann’s customers raped Selina about a year previous. And to pile on more tragedy, Selina has never been to school, so all she knows comes from her drunk grandfather, hateful mother, or what she hears on the radio.

Naturally, Selina falls for Gordon while Gordon really just wants to get her out of her terrible environment and into a school for the blind. The romance angle is problematic for the time of the film because Selina is white and Gordon is black, and those things simply didn’t happen in 1965. And to make matters even more melodramatic, Rose-Ann, in addition to being one of the most purely hateful characters ever created is also a racist. Oh, and she and her friend Sadie (Elisabeth Fraser) have decided to move in together, abandon Ole Pa, and force Selina into their world of prostitution. Aside from a couple of scenes featuring Ivan Dixon as Gordon’s brother and a moment where Gordon rescues Selina from a rainstorm, that’s pretty much the film.

The biggest strengths of A Patch of Blue are also its biggest weaknesses. This is pure melodrama from start to finish. Our good characters are purely good and our evil characters are purely evil. In a world where racism was a common element, the easiest way to show racism as evil is to make the worst character a racist and the sympathetic characters not racist. Selina is a true innocent, which makes her easy to root for, and when she loves a black man, that’s intended to make the “love is love” message more palatable.

I can imagine that this was an effective melodrama in 1965 when racial tensions were high. The easy emotional decisions offered in a melodrama make the desired conclusion of the audience something almost foregone. The issue is that in general melodrama doesn’t age well, and this really has aged poorly. Only the most intractable racists have an issue with interracial marriages these days, which makes the message on offer here one that has been overcome by general society.

Because of that A Patch of Blue is little more than an interesting time capsule. There’s no reason to watch this other than for a sense of history and the racial struggle at the time. Today, virtually no one would blink at the central conflict, which causes the film itself to fall flat.

Why to watch A Patch of Blue: Sidney Poitier further cements his status as the nicest guy of the era.
Why not to watch: Society has passed this film by a long time ago.