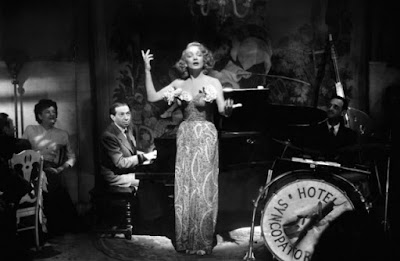 This is a Billy Wilder film, though, which means a number of things. It means that we’ll get some comedy here, and it means that the comedy we get will be tinged black. It also means that while this is a comedy and a romance, there’s going to be something else going on. A Foreign Affair is absolutely a romantic comedy, but it’s also about people trying to survive in post-war Germany, dealing with the black market and terrible shortages. There’s a desperation that works as an undercurrent for the story it tells.

The film takes place in Berlin while the city is occupied by Allied troops. The American GIs are acting like, well, American GIs in post-war Germany. Interested in troop morale and life in Germany after the end of hostilities, Congress sends a contingent of representatives on a fact-finding mission. Among this group is Congresswoman Phoebe Frost (Jean Arthur) of Iowa. We learn from the opening scene that this is a woman whose bun is tied a little too tight. Congresswoman Frost is uptight, easily offended, and prim to a fault, meaning that she’s going to be pretty upset by a lot of the nocturnal goings-on in Berlin.

When she arrives, she comes bearing a gift for a Captain John Pringle (John Lund)—a birthday cake made by Lund’s college sweetheart, who also happens to be one of Phoebe Frost’s constituents. Little does Miss Frost know that John Pringle is the current sweetheart of Erika Von Schluetow (Marlene Dietrich), torch singer at a local black market club. More interested in Erika’s well being than in the cake, John immediately trades it for a mattress, which he gives to Erika. Meanwhile, Congresswoman Frost is mistaken for a German woman by a couple of GIs. Hoping to learn more about the state of depravity in Berlin, she poses as a local and is taken to the club where Erika sings. Eventually, she spots John Pringle’s birthday cake being served to other customers. Pringle, realizing that he’ll be in serious trouble if he doesn’t do something, claims the cake was stolen and confiscates it.

But now Erika is in Phoebe Frost’s sites. A little investigating, and she discovers that Erika on Schluetow was friends with a number of the more important Nazis. Her current freedom, then, must be because she is being protected by someone, and naturally she enlists Captain Pringle to help her root out the person protecting a sympathizer, not realizing that she’s enlisted the very man she’s trying to catch. Instead, she sets her sights on Colonel Rufus J. Plummer (Millard Mitchell), the straight-laced higher up. And to cover himself, John starts to woo the congresswoman to keep her off his own trail. Hilarity ensues.

Jean Arthur is the star here, and rightfully so. She was always an underrated actress and she was a truly gifted comedienne. She had great comedic timing, and her voice matched perfectly with the roles she played. I’m a Jean Arthur fan, and I’m happy to watch her both play a prim stick-in-the-mud and also to see her romanced. I also always enjoy seeing Millard Mitchell in any role he takes. He was also a capable actor and a man who should be better known as a character actor. Marlene Dietrich is fine when she’s not singing.

The film is hampered by John Lund, though. He’s honestly about as interesting as a block of firewood. I have a difficult time believing that two intelligent and vibrant women would find this guy remotely appealing. William Powell wasn’t available? He could’ve pulled off this role standing on his head and made a better comic lead at the same time.

The big disappointment here, though, is that this is a Billy Wilder film, and it should be Wilder in his prime. This is after both Double Indemnity and The Lost Weekend and just before Sunset Boulevard, and it doesn’t come anywhere close to any of those films. This is the 11th film I’ve seen directed by Billy Wilder, and it cracks into the top 10 only because of Jean Arthur and because I like it more than I liked Irma la Douce. Wilder may have been cursed with the reality that when Wilder is the director, I expect it to knock my socks off. A Foreign Affair is little more than just serviceable, and that’s just not good enough for a Billy Wilder film.

A Foreign Affair is worth watching, as all Billy Wilder is, but it’s not one I’d recommend over almost any other Wilder film I’ve seen.

Why to watch A Foreign Affair: Jean Arthur is always a joy and an underrated comedienne.
Why not to watch: It wouldn’t make Billy Wilder’s ten-best films.