Meth: It Does a Body Good 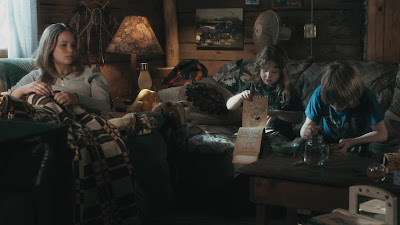 The only thing I knew about Winter’s Bone going in was that Jennifer Lawrence starred in the film and that it was her first Oscar nomination. Well, I knew that and also knew that almost everyone who had seen it had liked it. In a very strange way, Winter’s Bone reminds me of Eastern Promises. It’s not that the two are similar in plot. It’s just that both of them are the most depressing movies with a hopeful ending I can think of. Nothing good happens to anyone in either film, and yet both end on something like an up note.

Ree Dolly (Jennifer Lawrence) is 17-year-old with an adult’s responsibilities. Her mother is mentally ill, which forces Ree into the position of tending to her younger brother Sonny (Isaiah Stone) and sister Ashlee (Ashlee Thompson). Ree does the best she can, which really isn’t all that well. She does her best to keep the kids fed and clothed, but having to do everything at such a young age has left a lot to be desired. It doesn’t help that her father is serving time for cooking meth. Jessup Dolly is out on bail, but his whereabouts are unknown. Since he put up the house and woods behind it as collateral, if he misses his court date, Ree and her family will lose the house. The local sheriff (Garrett Dillahunt) is sympathetic to Ree’s plight, but there’s not much he can do.

The only thing Ree can do is look for her father. She starts with her uncle Teardrop (John Hawkes, who was nominated in a supporting role). Teardrop is another meth cooker and is also addicted to his own product. He’s naturally not much help. Ree follows the path of meth heads and criminals on the search for her father, a search that eventually leads her to Thump Milton (Ronnie Hall), the local crime boss, who wants nothing to do with Ree or her problems. In fact, everywhere she turns, she gets a stone wall and an icy gaze. Everyone in the area is more concerned about what Ree might discover than with helping her through the current difficulty. When Jessup fails to make his court appearance, Ree is given 10 days to either find him or find proof that he’s dead (she’s convinced of this) or the bond will forfeit and she’ll lose the house.

That’s really all there is here. There are a few bits of violence in the film because Ree is someone who doesn’t fit into the world into which she has descended. It’s not that she’s weak or feeble; in fact the opposite is true. No, Ree is actually forthright and doesn’t have a lot of use for the meth that is evidently being cooked up by just about everyone else she knows. Loyalties become strange as Ree moves further into this world and trust is hard for anyone to come by. Everyone is far more worried about Ree possibly spilling everything to the wrong person and prying too hard into this world often comes with a painful and sticky price tag.

Jennifer Lawrence was 19 or 20 when she made Winter’s Bone, a fact that is mildly extraordinary. She didn’t have a great deal of experience going into this film, but that’s not evident from the performance she puts on the screen. From the opening minutes to the close, this is her movie. Lawrence is never not believable in this role. Ree is tough and takes no shit from anyone, even when she’s getting a beat down.

Perhaps the most difficult thing for me to deal with here is just the crushing despair of the entire situation of the characters. This is the sort of poverty that needs to be seen to be believed. Ree is feeding her brother and sister from food she’s gotten from neighbors. In one scene, she teaches her younger brother how to shoot in the hopes that maybe he’ll shoot something for dinner. There’s a real sense of this sort of endemic poverty through the film as well. The houses look real and lived-in down to the detritus scattered through the yards. Either the person tasked with finding locations or the set designer (or both) more than earned the salary from this film.

What makes Winter’s Bone difficult is that there is no happy ending to be had here. Ree might be struggling to avoid the life of meth, poverty, and abuse that everyone around her seems locked into, but this is not very hopeful, even with the uplift provided at the end of the film. Everyone older than she is looks far older than their years, and even Uncle Teardrop is not averse to offering the girl meth to more or less bring her into the life. Sure, there’s something like a happy ending, but this is a world where happy endings seem few, far between, and temporary at best.

Winter’s Bone isn’t a film I’d choose to watch again anytime soon and it’s not one I’m comfortable saying I enjoyed. It’s worth a watch, though, if only to see the film that launched Jennifer Lawrence with directors and critics if not specifically with movie fans.

Why to watch Winter’s Bone: It’s a hell of a story.
Why not to watch: It shows the worst of humanity.