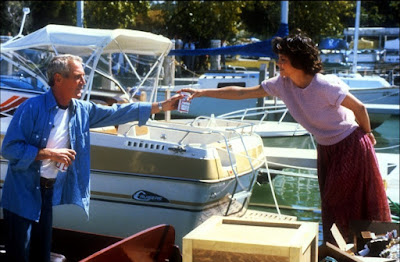 My wife and I met when we both worked on a college newspaper together. After college and for a bit after we were married, Sue was an editor for a small town newspaper. During those years, she wanted to watch any movie that involved or was about newspaper reporters. We watched a lot of them, including Absence of Malice. Sue also doesn’t tend to remember movies that well, so when this showed up in the mail, I reminded her that we’d seen this together years ago. She didn’t remember, not that I was surprised. She hasn’t worked for a newspaper in a couple of decades, so she doesn’t have the same fondness for reporter-based films anymore.

Absence of Malice is gets into the moral issues of news reporting in a way much deeper than most films of a similar bent. The movie asks the question of how far someone should go for a story and what moral responsibilities that reporter has for the people affected by that story. In a world of the 24-hour news cycle and tabloid journalism, it’s a question that doesn’t seem to be asked much anymore, and it’s one worth asking.

In Miami, a union organizer named Joey Diaz goes missing and is presumed dead, most likely hit by mobsters. Investigating the case is local reporter Megan Carter (Sally Field), who goes to interview a federal prosecutor named Elliot Rosen (Bob Balaban). Rosen leaves his office after a minute or two, leaving a file open on his desk that Megan reads. The next day, the front page of her paper says that a man named Michael Gallagher (Paul Newman) is under investigation for Diaz’s disappearance.

Gallagher knew nothing of this. The son of a deceased criminal, Gallagher runs a liquor wholesale business, which is suspicious since his father made his money bootlegging alcohol. The instant notoriety dramatically affects Gallagher’s business. Suddenly the union has pulled all of his union workers from his shop. The local crime boss, his uncle, has him tailed to ensure that he doesn’t talk to federal agents. And through all of this, Michael Gallagher knows nothing, and since the paper is absent of malice (they didn’t intend to damage him or his reputation), he has no legal recourse.

What follows is a very interesting game of multiple cats and multiple mice. At one time or another, Michael Gallagher, Megan Carter, Elliot Rosen, and local D.A. James Quinn (Don Hood) appear to be a cat or a mouse in relation to the other major players. As the various webs and plots play their way out, it becomes obvious that one of these people has been masterminding things for some time, and everything comes together at once.

This is a carefully crafted movie in all respects, which I expect with Sydney Pollack. We’re given a very smart script that doesn’t spend a lot of time making things easy for the audience unnecessarily. The final major scene before a short denouement does actually explain everything that happened and does so without condescending to the audience.

I did have an objection to the film as it was playing, and that last major scene even dealt with that. It seems like a “required” plot point that we’ve got to have a romance here, and our only real option for a romantic pairing are Michael Gallagher and Megan Carter. This is made easier by the exit of Michael’s girlfriend Teresa (Melinda Dillon). Teresa arranges a meeting with Megan to provide an alibi for Michael, but it’s one that she doesn’t really want to fully elucidate. As it happens, she knows that Michael could have had nothing to do with the disappearance of Diaz since he was out of town with her as she was getting an abortion. However, since she works at a Catholic school, she can’t have this publicized, a fact that Megan decides to overlook (again, absent of malice) when she publishes a story on Gallagher’s innocence.

It is, of course, beautifully acted. Both Field and Newman are as good as they usually are. Newman is subtle in this film; a lot of what he does happens internally, and a great deal of his performance happens in his face. It's not bombastic, but quiet and played with a sort of firmness of character that is difficult to describe. Michael Gallagher is easy to like (as Newman usually is), but he's also inscrutable enough that we never really know how dirty he is or how involved with the criminal enterprises of his family he might be. That, more than anything, is what makes the whole story work.

I didn’t love the romance between Michael and Megan. It felt unnecessary to me outside of the basic Hollywood requirement to have the two opposite-sexed stars of any film be a couple for at least a part of the film’s running time. However, as the film comes to a close, that relationship can potentially be viewed in a new light, and it makes the whole thing work.

In fact, my biggest and really only complaint about the film is the music. It frequently feels inappropriate for the drama playing out on the screen. In fact, most of it comes across as more appropriate for a movie of the week on television of the era. A bad soundtrack doesn’t turn this from a good movie into a bad one, but it’s pretty painful at times.

In retrospect, I think I know why Sue forgot this film. Megan Carter is ambitious and we assume a good writer, but it turns out she’s not a very good reporter. Sue liked reporters when they were heroes, and that’s not the case here. Maybe she blocked it out because it portrayed her career at the time in a less-than-favorable light. It is, however, a solid drama and it’s one worth seeing, especially in a world where the ethics of journalism seem to have departed us entirely.

Why to watch Absence of Malice: Dirty pool that just keeps getting dirtier.
Why not to watch: The music is straight out of a TV movie.