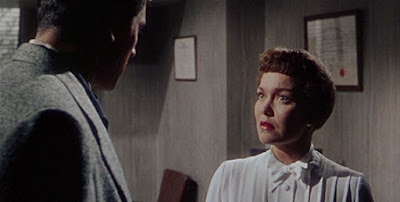 Douglas Sirk’s films were always packed to the gills with melodrama, but none that I’ve seen are as filled with maudlin syrup as Magnificent Obsession. This was evidently based on a book, and that must be the glurgiest, drippiest book that was ever written. I’ll go through the plot as usual here, and in about three paragraphs I will imagine all of you reading this rolling your eyes hard enough to strain a muscle. Keep in mind as you read this that I tend to like Jane Wyman and Rock Hudson, and I’ve also liked every Douglas Sirk movie I’ve seen to this point.

Bob Merrick (Rock Hudson) is a millionaire playboy of the type who does whatever he wants because he’s got the money to do it. He’s out racing around on his speedboat when he dumps it and needs to be rescued. The rescue involves a resuscitator, which means that the equipment wasn’t available locally. Normally this would not be an issue, except that the local doctor has suddenly had a heart attack and drops dead. With no resuscitator around, there’s no bringing him back.

Soon enough, the doctor’s widow Helen (Jane Wyman) discovers that her husband has pretty much left her and Joyce (Barbara Rush), his daughter from a previous marriage, a couple of steps away from the poorhouse. Gambling, booze, and loose women? No—Dr. Phillips was a paragon of human kindness, the sort of man who helped out anybody in need and refused to be repaid for his efforts. So he’s pauperized his wife and daughter to be Captain Altruism.

Bob suddenly decides that all of this is worth feeling guilty about—he’s spontaneously generated a conscience. He attempts to leave the hospital, but collapses and is brought back by Helen, who is unaware that this is the man who everyone claims is responsible for the death of her husband. Eventually, Bob leaves the hospital, and roaring drunk, crashes his car outside the house of artist Edward Randolph (Otto Kruger). Of course Edward was a friend of the late Dr. Phillips, and of course he subscribes to the same philosophy as the late doctor. Bob decides to give it a shot, and when he next encounters Helen and tries to make amends for what happened, she runs away and is struck by a car. For some reason this blinds her. For Jane Wyman, acting as a blind woman seems to mean sitting as stiffly as possible and moving as little as possible.

At this point, it’s important to know that Bob Merrick was a former medical student. It’s also important to know that Edward Randolph is a sanctimonious douche who is going to guilt Bob Merrick into giving his life over to benefitting other people (and that there will be tons of Jesus imagery in his doing this). If you can’t see that Bob Merrick is going to attempt to become a neurosurgeon at this point, you’re either not paying attention or you’ve never seen a melodrama before. If you can't see that Bob and Helen will fall in love with each other, you've never seen a movie before. Couple all of this with a soundtrack made entirely of strings, and we’re a baby step away from this being a full-blown soap opera.

It’s a shame, too, because I genuinely have liked the Douglas Sirk movies I’ve seen to this point. I’m hardly a Sirk aficionado (I’ve seen Written on the Wind and All that Heaven Allows), but I thought both of them were great, so I had hopes for this one. But this is almost literally painful. The last 20 minutes of this were desperately long. All I wanted was for the damn thing to end. Once we get to those last 20 minutes, there’s only one way the thing can wrap up, but it takes us forever to get there.

And it’s not even the melodrama that bothers me the most. It’s the sanctimony. At the end, we get Edward Randolph looking through a glass window down at an operating theater like a god looking down on the world below. The symbolism is pounded in with a mallet and it never lets up. And I could even buy into it if it wasn’t so smug and falsely pious. Creamed corn would call this corny.

I’d love to have liked this even a little, but I just can’t like it at all. It’s simply too much to take and to drippy and eye-rolling to take seriously. I recommend Douglas Sirk as a director to watch in general. I like Jane Wyman in a lot of roles. I think Rock Hudson was a damn fine actor. But this is one to avoid despite the critical acclaim it somehow received.

Why to watch Magnificent Obsession: Sirk’s films were always beautiful to see.
Why not to watch: So syrupy you could add soda water and make a phosphate.