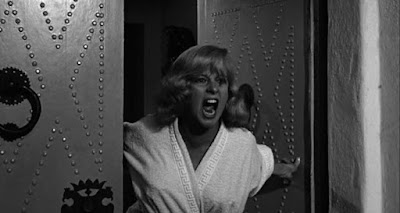 Kim Stanley had a very strange movie career. Evidently the bulk of her acting work was on stage, so she was only in movies infrequently. Despite this, she still managed a couple of Oscar nominations, and with The Goddess, she may well have been snubbed for a third. In this film, Stanley runs the gamut of emotions including a couple that lean toward the insane.

The Goddess is a sort of fictional biopic of Marilyn Monroe. At least the story seems very much based on her in a lot of ways. Young Emily Ann Faulkner (Patty Duke as a child, Kim Stanley as an adult) is born a few years before the Depression. Her mother (Betty Lou Holland) wants to give her away to relatives because she’s still young and wants to find another man to shack up with. But she bears down on it and gets a job and raises her child, who she completely ignores.

Meanwhile, Emily Ann dreams of going to Hollywood and being discovered. Before she gets out there, she meets John Tower (Steven Hill), the son of a famous movie actor. It’s not too long before Emily Ann marries him despite his constant depression and suicide attempts. The marriage is not a happy one, and eventually John is shipped off to a war zone, leaving behind Emily with a screaming child and in the exact same position her mother was in more than a dozen years before. However, Emily Ann doesn’t bear down on the problem. She skates off the Tinseltown and starts a movie career.

She also marries Dutch Seymour (Lloyd Bridges), an ex-boxer who also suffers from bouts of depression like her first husband. Eventually, she breaks away from Dutch and while her movie career flourishes, her personal life does not. She adopts the screen name Rita Shawn and becomes a sex symbol. But she has a breakdown on a set and spends time in a mental institution. At this time, her mother returns having found God and Jesus and tries to bring Emily Ann/Rita into the religious fold.

There are enough parallels to Marilyn Monroe here to call this film based at least sort of on fact—the early failed marriage, the marriage to an athlete, the sex symbol status, the destroyed personal life and eventual dependence on narcotics. But it creates some interesting problems with the film. The first is Kim Stanley herself. She is more than up to the task of handling this role; in fact, it’s one of her better performances. But she isn’t up to the task of qualifying as a Hollywood sex goddess. She just doesn’t have it in her. Stanley was not unattractive, but she wasn’t glamorous or gorgeous. A harder sell is earlier in the picture when she is allegedly playing a 16-year-old. I’m not sure Kim Stanley ever looked 16. She could play older well (witness Séance on a Wet Afternoon a few years later), but at 33-ish she looked 33. In fact, she looks between 33 and 40 the entire film.

That’s really the biggest issue with the film. It would have been better to find a young actress who looked enough like Stanley to fill for that first section of the film and then turn the reins over to Stanley for the second two acts. There are, incidentally, three literal acts here, each announced with a title card.

There’s a great deal to like with The Goddess. First, the screenplay (for which it was nominated) is top of the line. That’s to be expected, coming from the pen of Paddy Chayefsky. Emily Ann/Rita is presented to us as a woman disturbed by her own existence, not sure what to do with herself at any time.

As mentioned above, aside from her appearance, Stanley is at her best in this role. She handles the mood swings and emotions and small nuances of expression and movement like a champ. Similarly good are Steven Hill and Lloyd Bridges as well as is Elizabeth Wilson who appears in the final act as Rita’s secretary/nurse. There’s a lot of raw emotion on screen throughout the film and we’re never given a chance to shy away from it.

There are also some fun smaller parts, like Werner Klemperer showing up as one of Rita Shawn’s directors, Joe Wilsey. Chayefsky’s script gives us tragic moments, like Wilsey’s character and his wife showing up to visit after Rita has been released from the hospital. Rita’s mother tells them how happy she is that her daughter can depend on friends like them only to be told that they visited her in the hospital because Rita was working on Wilsey’s picture and was costing him thousands for not being on set.

There’s tragedy aplenty here. The Goddess is not a happy movie, and it’s not one I think warrants a rewatch. The story is good, and Kim Stanley is great, but overall, I can’t say it did a great deal for me.

Why to watch The Goddess: Kim Stanley.
Why not to watch: Kim Stanley is great, but she really doesn’t work as a high schooler.

Posted by SJHoneywell at 8:28 PM