I'm Crazy for Loving You

Film: The Story of Adele H
Format: DVD from NetFlix on rockin’ flatscreen. 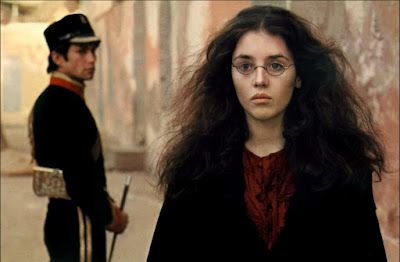 Issabelle Adjani has been nominated for two Oscars: one for Camille Claudel and one for The Story of Adele H, which is what I watched today. Three other movies of hers I can name off the top of my head are the remake of Diablolique, the remake of Nosferatu and the psychotic horror film Possession. I haven’t seen the first film mentioned, but evidently in that film, Adjani plays a schizophrenic. What does this mean? It means that virtually every Isabelle Adjani film that I can name has her playing someone with some sort of mental illness.

The Story of Adele H concerns the life of Adele Hugo, the second daughter of Victor Hugo, who wrote “Les Miserables” and “The Hunchback of Notre Dame.” This is a story told in much less of a grand sweep than the tales of Hugo tend to be, though. This is because this is not a grand romance, but a tale of mental illness disguised as a romance.

Adele Hugo (Adjani) has followed a British military officer from her father’s exile in Guernsey to Halifax, Nova Scotia. The young lieutenant, Albert Pinson (Bruce Robinson), was once involved with Adele, but has moved on. Adele has not, and has decided that Albert is the man she is destined to be with. Pinson is stationed in Canada because of potential British involvement in the American Civil War. Adele is traveling under an assumed name, hoping to surprise him, and firmly of the belief that the two of them are meant to be together and that he loves her as much as she is obsessed with him.

Of course, he doesn’t return this love because Adele soon proves herself to be schizophrenic and living in her own little world. She continues to press for the attention of Albert, going to increasing lengths to get him to notice her and, thanks to her delusional state, she is convinced no matter what he does that he intends to marry her. This includes demanding her parents’ consent to the marriage and eventually claiming that they are married and calling herself Mrs. Pinson. She even fakes a pregnancy to demand that Albert break off his engagement with another woman.

It’s a foregone conclusion that this isn’t going to end well, isn’t it? Adele sinks deeper and deeper into her madness, demanding additional money from her parents to continue living in Halifax despite their eventual realization that she has not married Albert and has instead cause them a great deal of embarrassment. Adele sinks deeper and deeper into madness, eventually following Albert’s regiment to Barbados when they are reassigned. Here, she continues to call herself Mrs. Pinson, but is so far gone into madness that she no longer recognizes the object of her affection.

What makes this story interesting is really only the fact that it’s based on reality; the screenplay is based at least in part on the diaries of Adele Hugo herself. There’s something interesting in this attempt to make the diaries of someone with severe mental illness into something comprehensible, and I respect that.

I also respect the performance of Isabelle Adjani. I mentioned at the start that almost all of the roles of hers that I can recall have her portraying someone with a severe mental illness. There’s a reason for that. Part is certainly that these are the roles she gets. Part of that, though is that Adjani portrays these roles brilliantly. She makes a damn fine schizophrenic in part because she’s also gorgeous, which makes her in some sense immediately sympathetic. We’re willing to accept her madness a little bit longer than we might otherwise because of how she looks.

This strength is also the film’s biggest weakness. The minute that we figure out just how crazy Adele is, we can guess immediately how the film is going to end. We watch Adele try anything she can to force Albert into marriage, including damaging his reputation and even destroying his career. But we know where this is going. There’s only one place for it to go.

It goes back to something I’ve said before. I always want to like the films of Francois Truffaut because he always seemed like such a nice guy. I love him in Close Encounters of the Third Kind, so I always want to like his films, too. I just never like them nearly as much as I hope I would.

Why to watch The Story of Adele H: Isabelle Adjani plays the best psychos.
Why not to watch: Once you figure out that Adele is crazy, the conclusion is foregone.