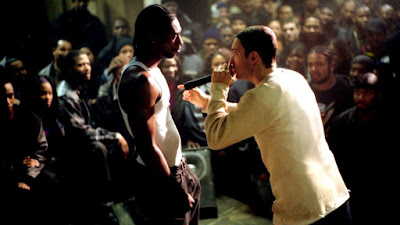 There were a number of solid screenplays for 2002, although the ones that I wanted to put here tended to be adapted rather than original. I’m a fan of Hero, which presents a simple but interesting story. Sadly, with two foreign films nominated already, a third would be a stretch. Panic Room would have been an interesting nomination. One Hour Photo and Frailty are the wrong genre, but both would have been interesting picks even if neither could have won. The biggest miss in my opinion is 8 Mile, which is a lot smarter than most people remember. Sadly, Super Troopers couldn’t earn a nomination in this or any other world.

5 Ultimately, I have to put something fifth, so I’m dumping Y tu Mama Tambien off the top. I don’t have a huge issue with the screenplay here, but of the five movies that were nominated, it’s the one I like the least and the one I am the least likely to watch again. In my review of this, I called it a depressing version of Amelie, which makes it a version of Amelie that removes everything that makes it fun and worth seeing. I think this is a good film, but at some level, the choice here comes down to my enjoyment of a film.

4. I really like Far from Heaven, so I’m sad that it has to end up fourth. The reason I’m putting it fourth is that most of what I really like about the film are the aspects other than the screenplay. This is a film that I wish more people knew and more people would watch. The story, while good, isn’t the reason to see it. It’s more about the way Far from Heaven is filmed and the beauty of the actual film itself. I’d love to rate it higher, but considering the competition, I can’t.

3: Talk to Her is a subversive film in a lot of ways, and I appreciate that. There’s also a very creepy vibe at the end of this film and I like that, too. Pedro Almodovar has a way with his camera and his stories, and this would rank as one of my favorites of his films that I’ve seen. I even understand completely why it won. So why am I putting it third? I just like the other two films more, and I’m much more likely to watch them again.

2: I’ll be the first to admit that My Big Fat Greek Wedding is the sort of entertaining fluff that I would normally put fifth. So what’s it doing a step below the top? It’s hard to fault a film that is this well written. The characters are immediately memorable and the screenplay is filled with great and quotable lines. That it also plays with some of the standard conventions of romantic comedies is simply an additional plus for a screenplay that is already one of the best of its year.

1: If I had been in charge of nominations for this category for this year, my top two choices would be Gangs of New York and 8 Mile. I’d have a difficult choice between the two, since I think both are brilliant. However, the rule I’ve established here for myself is that the tie always goes to the Academy. Gangs of New York is a grand and sweeping story, yet for all its complexity it never loses sight of the story. It’s the sort of film that should be rewarded more than it was, and so I have no problem putting it first.

Posted by SJHoneywell at 9:59 AM