Film: Hellraiser
Format: Streaming video from NetFlix on The Nook. 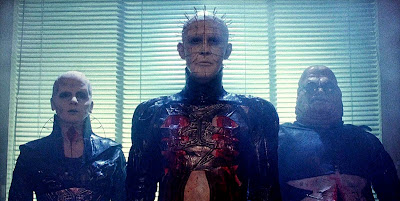 I’ve read some Clive Barker although it’s been years. I haven’t loved his novels much, but some of his short stories are incredibly memorable. “In the Hills, the Cities” is the kind of story that stays with a person, or at least it was for me. Hellraiser was both written and directed by Barker, based on his novel “The Hellbound Heart.” The film created one of the most enduring horror icons in history. Pinhead is as much a part of horror lore as Freddy Krueger or Michael Myers. Hellraiser is a classic of the genre for a reason and very much in spite of some epically bad special effects.

Just as enduring a horror image is that of the puzzle box, which has a central place in the film. Frank Cotton (Sean Chapman, but played by Oliver Smith in his eventual undead state), looking for the extreme in sensual pleasures, finds the signature puzzle box in a shop. He purchases it and solves it, unleashing a series of hooked chains that sink into his flesh and rend him into pieces. The puzzle box, however, remains. Shortly thereafter, Frank’s brother Larry (Andrew Robinson) moves into his childhood home with his second wife Julia (Claire Higgins), not knowing that this is the very place where Frank was torn to bits or that the puzzle box is still in the house.

As it happens, Larry’s relationship with his wife is strained. Part of that comes from Julia’s having had an affair with Frank, not that Larry is aware of this. It’s also strained because Larry’s daughter Kirsty (Ashley Laurence) is not a big fan of Julia. In fact, rather than moving back home, she decides to stay with friends. An accident causes Larry to cut his hand during the move. Blood drips onto the floor where Frank died, which causes him to resurrect, albeit without much more than a skeleton and some muscle. Eventually, Julia finds out and agrees to bring back victims to the house. These men she kills with a hammer and Frank uses their blood to restore his body.

Eventually, Kirsty finds out and gets control of the puzzle box. When she opens it, it releases the Cenobites, horrific beings from another reality that live in pursuit of ultimate pleasure and pain to the point that they are no longer able to tell the difference. The Cenobites are led by Pinhead (Doug Bradley), assisted by the female Cenobite (Grace Kirby) and flanked by the Chattering Cenobite (Nicholas Vince) and the Butterball (Simon Bamford). They’d like to take Kirsty back to their private hell with them, but she has realized that her Uncle Frank has escape from them. The Cenobites agree that if she will give them Frank, they’ll let her go (not that they’re really planning on letting her go, of course).

Hellraiser does a few things really well and one thing staggeringly poorly. That downside is the special effects that concern the puzzle box. They look as if someone has drawn directly on the film with a colored marker, which is evidently pretty close to what actually happened. Moving a part of the puzzle box causes little colored sparks that are amateurish to the point of being embarrassing. Oh, for a budget that would actually do justice to the ideas at play.

Pretty much everything else here is very good, though, starting with the costuming. Pinhead and his crew are horrible to look at, with open wounds, piercings, and more. They truly look like people who have allowed themselves to go to and far beyond the extremes of physical pain and pleasure. In fact, it’s that they still look mostly human that makes them so terrible. These are not immoral beings, but ones for whom the concept of morality has no meaning.

The story is also really, really good. Sure there are some things that need to be accepted as a part of the story, like Larry suddenly deciding to move back to his childhood home, but the elements that really drive the story work. This is a truly transgressive story, one that explores elements of sadism and masochism, sex and pleasure and pain. The horror here is real because for all of the Cenobites and magical puzzle boxes, it’s ultimately a human horror. Julia and especially Frank become what they do and perform the actions they do because of a supreme hedonism and selfishness where their own pleasures become paramount even to the lives of the people they know and ostensibly care about.

So, ultimately, Hellraiser is memorable for the best reasons. This is a film I’d seen before and I had forgotten about the pitifully bad special effects. I didn’t forget about the sex, the Cenobites, the costuming, or the base story, though. Ultimately, a good story will triumph over even the worst effects. Hellraiser is evidence of that. It’s a staple in the genre for a reason, and it’s hard to call yourself a horror fan if this is still on your “to see” list.

Why to watch Hellraiser: It’s a truly transgressive film.
Why not to watch: The special effects are shit even by 1987 standards.