Picks from Chip: The Man from Earth

Film: The Man from Earth
Format: DVD from personal collection on rockin’ flatscreen.

This is the ninth in a series of twelve movies selected by Chip Lary at Tips from Chip. 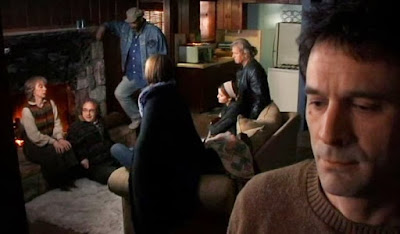 I’m not allowed to take gifts from my students because it creates a conflict of interest. However, after said student graduates, I don’t see much of an issue with it. I was given a copy of The Man from Earth by a student a number of years ago and was told that I should really watch it. I just never got around to it. So when Chip put it on my list, I figured that I’d get to it this year.

Here’s the elevator pitch: A man named John Oldman (David Lee Smith) is leaving his position as a professor at a small university. A few of his friends show up to see him off and to question why he’s suddenly decided to leave. John spins a tale about his life, claiming to have lived for more than 14,000 years. John claims that he began life as a Paleolithic cave dweller, lived nomadically from tribe to tribe for centuries, spent millennia as a Sumerian, and influenced history in a number of significant ways. Meanwhile, his audience decides whether or not he is believable or has gone completely insane.

No, really. That’s it. And the audience John has for his tale is uniquely qualified to judge his story. In attendance at his farewell party are professors in fields that can specifically throw light on the veracity of his claims. There is biologist Harry (John Billingsley), anthropologist Dan (Tony Todd), historian Sandy (Annika Peterson), archaeologist Art (William Katt), and art historian Edith (Ellen Crawford). Partway into the film as John takes a break from his story, Art contacts another colleague, bringing psychiatrist Will Gruber (Richard Riehle) into the mix as well. And for reasons that seem to be merely to establish his character as the sort of professor who has affairs with his students, Art the archaeologist has brought along Linda (Alexis Thorpe), one of his students.

What makes John’s story so frustrating from the point of view of his guests is that it lacks the sort of specifics that they’re looking for to confirm the whole thing. He’s not sure geographically where he was born or where he moved to. He can’t be certain of the various locations he lived for millennia because there was no written history. He has no artifacts from his distant past. And yet for each of these apparent problems with his story, he has a plausible answer that makes more sense than if he had been able to produce the knowledge or memories he is asked to produce.

Eventually, and almost as would be expected in a conversation like this, the topic turns to religion. John gives his opinions and things become tense between him and Edith, who is a biblical literalist and a devout Christian. That, and the probing from Will are the main points of contention here beyond everyone simply trying to find places to poke holes in John’s story. In a large sense, this film could be called My Dinner with Caveman.

The Man from Earth was made without much of a budget and with actors who are recognizable without necessarily being household names. I’m always happy to see Tony Todd getting work, and it’s nice to see William Katt as well. This is the sort of film that actors seem to take to demonstrate their dedication to the craft. I’m guessing pretty much everyone was paid scale for this, and did it because the script was good and interesting and worth doing. It’s an obvious labor of love rather than something made to generate a ton of money.

With a film like this, essentially a long conversation, the script has to be good. The characters have to be intelligent and worth listening to for us to care at all. Of course, John gets all the good lines, but there moments of real humanity the peek through. We discover that Sandy is in love with John and has been for almost his entire 10 years at the college, and this is slowly taken into account with the rest of the dialogue. Edith’s religious convictions come out naturally in the course of the conversation, not through some unnecessary bit of exposition. It’s as finely crafted a script as I’ve seen in some time, because for the lack of action and reliance simply on watching people talk, it never once becomes boring. It helps that with a running time of 87 minutes, it also never becomes oppressive and ends right when it should.

The Man from Earth probably isn’t the best movie I’ve seen this year. It may not be the best movie I’ve seen in the last three months. It is, however, one of the most thought-provoking films I’ve seen this year or any year. There are huge questions that come into play with this story, and Jerome Bixby’s screenplay (the last of his storied career) is smart enough to give us partial answers that end up creating more questions.

I recommend this film without reservation, provided you can watch a film that doesn’t have explosions, decapitations, or sex. If you’re fine with watching a long and interesting conversation about heady topics, this is a film not to miss. The Man from Earth is an unqualified win. Chip, you’re 8.5 for 9.

Why to watch The Man from Earth: A unique story expertly told.
Why not to watch: It’s really just a 90 minute conversation.

Email ThisBlogThis!Share to TwitterShare to FacebookShare to Pinterest
Labels: drama, Picks from Chip, science fiction, The Man from Earth