Film: The Sunshine Boys
Format: DVD from NetFlix on laptop. 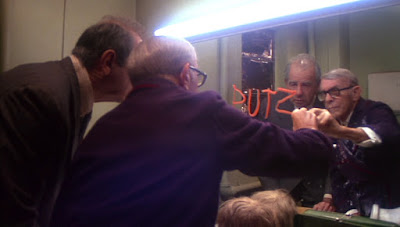 I’m not a huge fan of Neil Simon. I realize that there was a time (generally the 1970s) when Simon could do no wrong, but there’s something artificial about his plays. Simon was too clever by a half; all of his characters were not merely quirky; they were all quirky in the same way. Everyone always had the right thing to say all the time. Everyone is an emotional train wreck. A little Neil Simon goes a long way with me, so it wasn’t without reservations that I watched The Sunshine Boys.

The Sunshine Boys suffers from the exact same problem as all of the other Neil Simon that I’m familiar with. However, it’s tempered here. First, this really is a well-done screenplay. Second, it contains a couple of truly great performances. Walter Matthau was nominated for Best Actor for this role, and George Burns (in his first movie in more than 30 years) won for Best Supporting Actor. The characters, especially Matthau’s, are extreme, but I can’t fault the performances for a second.

This is a simple film, and is much less about the plot than it is about the characters and their relationships. We start with Willy Clark (Matthau), an aged vaudevillian still looking for work. His nephew Ben (Richard Benjamin) works as his agent, but he can’t find anyone willing to hire the old man for anything. Willy auditions for a potato chip commercial, an audition that goes horribly because he can’t find the advertising agency, won’t say the lines, and can’t even get the name of the potato chip company right. Despite this, he can’t imagine why he wasn’t hired for the spot.

We also learn that Willy Clark was once a part of a vaudeville duo called Lewis and Clark or The Sunshine Boys with his partner Al Lewis (George Burns). After more than four decades of performing together, the two split and there is a great deal of animosity between them. They haven’t spoken to each other in more than a decade. Then comes word that a television network wants to produce a special about the history of comedy from the ancient Greeks to the modern times, including a live sketch featuring one of Lewis and Clark’s classic routines. So now Ben has to convince these two old cantankerous men to reunite for a single show. And, naturally, hilarity and problems ensue.

I mentioned above that the characters are extreme, and they are. Both Willy and Al are comedically old. They repeat what other characters have just said, do things wrong and blame other people, and get frustrated when they make mistakes, which they immediately blame on someone else. This is especially true of Willy, who is absolutely miserable as a human being. Willy also seems to have problems with doors in that he frequently can’t seem to open them.

So, on the surface, The Sunshine Boys is not believable in the way the characters work. No one could possibly be as personally vile and mean-spirited as Willy Clark and still have a dedicated family member like his nephew Ben. Ultimately, though, this isn’t very important because this really is a funny movie. There is whip-smart dialogue and solid one-liners that run through the entire film. Better, we get to see the bulk of the classic sketch as the two rehearse for the big show. A lot of the humor is pretty stupid, but it’s also a very clever kind of stupid. These are good jokes, and if I were told that this was based on a real Vaudeville routine, I wouldn’t be surprised.

Beyond that, there’s not a great deal here. There are a couple of fun cameos. Howard Hesseman plays the potato chip commercial director and F. Murray Abraham plays a mechanic in an uncredited role a few years before anyone really knew who he was. The entire movie more or less plays to a couple of set piece scenes. There are a couple between Willy and Ben, one between Ben and Al, and two or three between Willy and Al that are the entire point of the movie. This isn’t to really get us to a particular point or to tell a specific story. It’s really all about just getting these two old men back together and seeing what happens.

So, while the characters aren’t really believable, particularly in the case of Willy, the lines are good and the performances are stellar. Walter Matthau has never been better than he was here. Willy Clark is a solid bastard, but there’s a real joy in watching Walter Matthau play this role. There’s a not-very-well hidden glee in every line. George Burns is quietly funny, handing out really good one-liners like a straight man. There’s a charm to the man in this film that is difficult to explain.

I can’t call myself a Neil Simon fan yet, but I appreciate this film for what it is. It’s not something I would watch every day, but it’s hard not to enjoy this on some level.

Why to watch The Sunshine Boys: Matthau and Burns forever.
Why not to watch: Like all Neil Simon, it’s too clever for its own good