Film: I Want to Live!
Format: DVD from NetFlix on laptop. 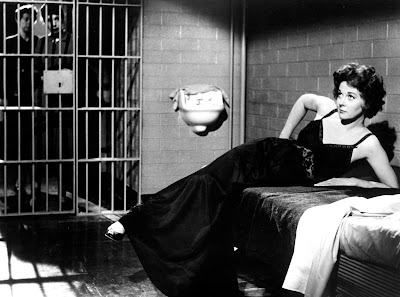 I Want to Live! is a polemic. As it happens, it’s a polemic that I happen to agree with in terms of its ultimate message. That unfortunately doesn’t change the fact that I Want to Live! gets at its ultimate message by playing significantly with the underlying story we are being told. This is a film that evidently fudges the truth to tell a better story. How much does it fudge the truth? Frankly, it apparently reverses events completely.

Barbara Graham (an Oscar-winning Susan Hayward) is the ultimate good-time party girl. She’s been booked for a number of misdemeanor charges including solicitation, but that hasn’t done anything to change her ways. At one point, she is asked by a couple of associates to lie for them on the stand to prevent them from going to prison. Not only do the two cons end up spending hard time, Barbara gets a year for perjury. Once she’s out, she decides to go straight. She marries Henry Graham (Wesley Lau) and attempts to enter the regular world.

That lasts long enough for Barbara and Henry to have a child. Sadly, Henry is less than he promised, since he has a serious narcotics addiction (and, true to the time in which the film was made, his actual drug of choice is unspecified by probably heroin). Barbara kicks him out and survives in the house a little longer through check fraud. Eventually, when the landlord catches up with her, she takes her son and returns to her old pals Emmett Perkins (Philip Coolidge), John Santo (Lou Krugman) and Bruce King (James Philbrook), whom she despises.

As it happens, the three are on the run from a job that went bad and involved the death of an old woman. Bruce heads to Mexico and wants Barbara to go with him. She refuses and sticks with the other two. However, the police are immediately on her tail and capture all three. Unbeknownst to her, Barbara is now up for the murder rap, since the jilted Bruce has decided to pin the actual crime on her. She attempts to create an alibi, but this turns out to have been a bit of police entrapment. In short order, Barbara is convicted of a murder she had nothing to do with and is sitting on death row.

Key in all of the proceedings are Edward Montgomery (Simon Oakland), a journalist who followed the actual Graham case and whose many newspaper stories were used as source material. Additionally important is Richard Tibrow (Gage Clarke), Barbara’s attorney who does everything he can to delay and commute Barbara’s sentence.

I Want to Live! is a film specifically designed to argue against the death penalty since it purports to give us a woman who we know is clearly innocent of the crime she is charged with and for whom the justice system repeatedly fails. In reality, based on the research done by a variety of people involved with the film (including Susan Hayward), Barbara Graham was probably guilty of the crime for which she was ultimately executed (at least according to IMDB).

There are three truly noteworthy elements of I Want to Live! that make the film worth paying attention to. The first is the performance of Susan Hayward. I like Susan Hayward well enough even if she wouldn’t be one of the first names off my lips for actresses of this era. This, however, is the best performance of hers that I’ve seen. Barbara Graham becomes something more than just a face for the anti-death penalty movement. Despite her innocence of the relevant crime in the story of the film, this is not an innocent woman. She’s amoral and more than willing to use sex (and just about anything else) as a weapon, at least in terms of emotional attacks. She’s not violent, but she’s not a good person. In spite of this, or perhaps because of it, she is one of the most compelling screen characters of the decade.

Second is the direction of Robert Wise, particularly in the last half hour. The final quarter of the film (more or less) is devoted entirely to Barbara Graham’s final 24 hours. We get several stays of execution, attempted commutations of her sentence, delays and more. Wise shows us all of this as well as the preparations for the San Quentin gas chamber in minute, excruciating detail. This is never dull; in fact it does nothing so much as to increase the tension of those final hours moment by moment. It’s terrible and tense to the point of being emotionally shattering.

I Want to Live! was nominated for five Oscars and in my opinion there should have been a sixth nomination. This film (along with Elevator to the Gallows from the same year) features one of the first truly great jazz soundtracks in film history. There’s something about hot jazz that makes everything that happens in the film that much more seamy. It’s a perfect choice for the action on screen.

The biggest issue here is that in attempting to make a film that stands against the death penalty, the filmmakers evidently decided to rewrite the truth. It damages the argument in my opinion, and as much as I might be anti-death penalty myself (although I wasn’t for years), it’s difficult to use an argument this flawed even if it makes the case it wants to. In the world of the film, the truth didn’t set Barbara Graham free; in reality, it was evidently the truth that got her convicted. That’s dirty pool.

Despite this, I Want to Live! is a film worth seeing. Susan Hayward is at her best here, both pitiable and filled with a nihilistic bravado. Coupled with Wise’s tight direction and a forceful, driving soundtrack, this is a film that works on almost every level.

Why to watch I Want to Live!: The last half hour is gripping.
Why not to watch: It plays with the truth.