Watching movies off a list means watching a lot of older films. This means that I’m frequently behind the times when it comes to more recent films. When I get the chance, I do try to catch up on newer films. I cooked all day yesterday, so I had the opportunity to watch a couple including Captain America: The Winter Soldier. In that movie, the evil organization Hydra has infiltrated S.H.I.E.L.D. in an effort to locate and neutralize direct threats to itself. 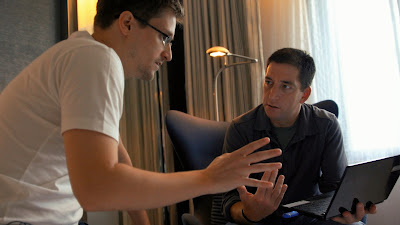 This is a roundabout way of saying that the new 1001 Movies list is out and it includes Citizenfour (sometimes written CITIZENFOUR), the documentary about Edward Snowden and the release of data on NSA spying. It wouldn’t be difficult to see The Winter Soldier as a fictionalized, somewhat jingoistic version of Edward Snowden’s story. It’s interesting that a lot of the people who would cheer for Captain America in the one movie will happily brand Snowden a traitor for in many ways doing a less action-packed version of the same thing.

There really isn’t a great deal in terms of summary for this film. Snowden contacted filmmaker Laura Poitras and journalist Glenn Greenwald and had them come to meet him in Hong Kong. There he divulged a great deal of information about the NSA, illegal spying, and huge violations of national and international laws with the justification of national security. A huge shitstorm develops. Snowden is praised by some as a brave whistleblower and a hero and by others as a coward and traitor. Eventually Snowden finds political refuge in Russia, where he still currently is.

There are a few important points worth going over here. The first is the release of Snowden’s name to the media and the general public. It’s evident from the opening scenes that he not only expected this to happen, but that he wanted the people he’d chosen to divulge these secrets to reveal his identity. It was his plan to be public about his identity and what he was doing both to take heat off his chosen media outlets and to avoid any potential stories about his secrecy rather than what he revealed.

The bulk of the film takes place in a couple of Hong Kong hotel rooms. There are some truly surreal moments as we watch Snowden brushing his hair while we hear news reports from the television in the background breaking the story about the NSA and the leak. This is not a re-creation of the event, but Laura Poitras actually being a part of what Snowden wanted to do and give her and Greenwald (and eventually Ewen MacAskill, a British journalist) complete access to the information that he revealed.

Citizenfour is an upsetting film. There is a moment in every person’s life when he or she discovers that his or her country does things that they accuse other countries of doing. For me, that happened when I was 12 and I found out about the Japanese concentration camps during World War II. That was the moment I realized that we weren’t always the good guys and that we’re just as capable of doing real harm and real evil in the world. I can only imagine that this event and potentially Citizenfour may wake up another generation to that reality.

There are some serious issues here. Laura Poitras has evidently been on watch lists for close to a decade because of films she has made, and eventually she holed up in Berlin because American border agents (under orders from someone probably citing the Patriot Act) attempted to seize her footage. Glenn Greenwald lives in Brazil and fears that a return to the U.S. would result in a subpoena in a best-case scenario, although he’s apparently been back without incident. Still, there are large questions here about governmental power and overreach, and about how much of our privacy and our rights we are willing to give up for what we’re told is added security.

I’m not going to give my opinion on Edward Snowden. The main reason for that is not wanting to turn my comments section into political screeds one way or the other, although I can’t (and won’t) stop any of you from arguing back and forth.

What Citizenfour really accomplishes more than anything is that it humanizes Snowden and makes him a person. It’s easy for one side of the political aisle to look at him as something like a latter day information Jesus. It’s similarly easy for the other side to look at him as little more than a demon in human skin. He’s neither. He’s a guy who saw something he thought was wrong and acted in the best way he could determine to stop the problem. Poitras does a good job of being as neutral as possible in her coverage, allowing the audience to make up its own mind. It’s clear that she’s on Snowden’s side, but this isn’t something she forces on the audience. She’s as even-handed as she can be.

One thing that quickly becomes obvious is the toll it takes on Snowden himself. By the end of the film he has palpable dark circles under his eyes. I would imagine that he is a man justifiably paranoid and a little scared every time he steps outside.

Agree with what Snowden did or not, the conversation started by Citizenfour is one that needs to take place between a lot of people and at a lot of different levels. This is a film that deserves to be seen.

Why to watch Citizenfour: You need to.
Why not to watch: Ignorance is bliss.