Film: Rampage
Format: Streaming video from NetFlix on The Nook. 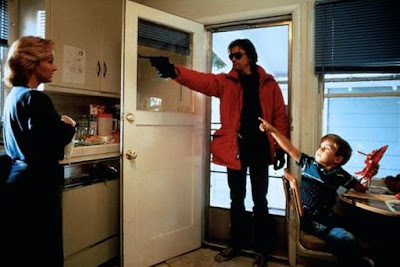 The three lists of horror movies I’m watching are a mixed bag in almost every respect. Some of these horror movies are among the best movies ever made. Others have proven to be badly made, ridiculous, and not really worth my time. Another way these are a mixed bag is that while many of them really are horror movies, a number of them are not. Rampage is one of these. I’ve classified it in the tags for this post as a horror movie simply because it’s on one of the horror lists. In any sane world, though, this would never be classified as horror despite some truly horrific elements.

That’s a little surprising since this comes from William Friedkin, who is most famous for The Exorcist. Rampage is tangential to horror in that it covers several gruesome, senseless crimes and dives heavily into ideas of insanity. For me, though, it’s hard to call something a true horror film if it’s based (or could be based) in reality, and Rampage is definitely centered in the real world.

Charles Reece (Alex McArthur) appears to be a normal young man in all respects. So it’s shocking to say the least when he, out of nowhere, breaks into a house and kills all three inhabitants. It’s even more shocking when he proceeds to mutilate the corpses and drink their blood (although this is merely told to us, not shown). He does the same thing to a woman who lives near him and one of her sons. Eventually, the police track him down and arrest him. While there are a couple more murders that occur during an escape, the bulk of the film really happens after Reece is arrested and goes to trial.

Essentially, at least from what I can see, the murders are here to get us in the door, because the film really isn’t about the murders at all. Instead, this is about the moral dilemma faced by prosecuting attorney Anthony Fraser (Michael Biehn). Fraser has never prosecuted a capital case before, but he’s being pressured to bring the death penalty to the table in the case of Charles Reece. He’s morally opposed to the penalty, but the gruesome nature of the crimes and the complete lack of remorse of the killer slowly bring him to the side of pushing for the ultimate penalty. Naturally, Reece’s attorney Albert Morse (Nicholas Campbell) is pushing for an insanity plea, and Charles Reece seems very much like a good candidate for such a defense. He’s paranoid, evidently delusional, and convinced that everyone is poisoning him. In fact, he drank the blood of his victims because he believed that he needed the blood to survive.

So there’s a lot here that’s pretty compelling and makes for a good story. The problem is that a lot of this ends up bogged down in things that aren’t really central to the story and don’t really seem to impact the narrative in any way. There are a lot of plot red herrings, as it were. For instance, we learn that Anthony Fraser and his wife Kate (Deborah Van Valkenburgh) had a young daughter who died from pneumonia. This is mildly relevant when Fraser speaks to Gene Tippetts (Royce D. Applegate), the husband and father of Reece’s second set of victims. Or it seems like it will be relevant but turns out not to be, since Tippetts doesn’t testify in the case.

Because of this, and other, similar issues, Rampage feels like a film that has a story it wants to tell but that it can’t quite bring itself to tell. There’s something here getting in the way of the story. We’ve got brutal killings, but everything is hinted at for the most part. Instead of adding to the potential horror of the situation, it simply doesn’t work.

And that’s too bad because this is a story that should be really interesting. It ends up being a courtroom drama, but the whole thing feels entirely pointless by the end. We’re given a disturbing coda at the end of the film, but even this just makes the whole thing feel like a police procedural more than anything else. There should be genuine horror with the crimes, and it never gets there. Sure, these crimes are terrible and senseless and Charles Reece is terrifying whether he is sane or schizophrenic, but the film is emotionally flat.

There is a solid supporting case. John Harkins and Art LaFleur are immediately recognizable “that guys” in this film, and both of them are as good as they ever are. It’s a solid B-movie cast all the way around, in fact. But it feels like it never really gets out of the starting gate. Instead of horrible discoveries or action or even gruesome crime scenes, we get conversations about the prisoner’s mental state and footage of PET scans.

There is a story here. There is a film that could be made about this case (it was based on a real case) that could be interesting and terrifying both. Sadly, Rampage can’t really find its voice so it ends up being neither.

Why to watch Rampage: The story of some really terrible, senseless crimes.
Why not to watch: If you go in thinking it’s a horror movie, you’ve come to the wrong place.