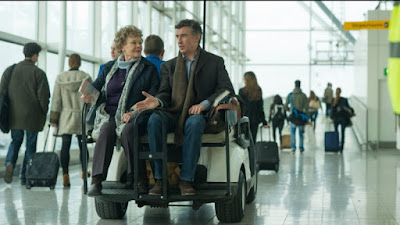 The movie(s) I watch on a given day are watched from a combination of availability, mood, and the need to remove movies from my various lists. I have a stack of movies checked out from the library sitting in front of me including the last two I need to complete the latest 1001 Movies list. But tonight I was in the mood for something lighter, something that didn’t require me to think that hard. I wanted something I could just sit back and enjoy. At the 1:37 mark, the trailer for Philomena calls it “…a comedy about two unlikely companions.” The trailer is also filled with scenes of Judi Dench being whimsically outspoken and brash. Sounded like the perfect thing for what I was in the mood for.

Philomena is not a comedy. There are a couple of funny moments in it, but all of the funny moments are in the trailer. All of them. In fact, aside from genocide and terminal illnesses, there aren’t a great many topics that are less funny than what Philomena explores. I’ll cut to the chase here early—this is a very good, perhaps even great movie—but it might be the most misleading trailer I’ve encountered this decade.

Martin Sixsmith (Steve Coogan), a former journalist, has lost his job in Britain’s Labour government by having quotes he didn’t make attributed to him. While contemplating writing a book of Russian history, he meets Jane (Anna Maxwell Martin), who suggests he write a story about her mother Philomena (Judi Dench). Philomena, fifty years earlier (and played by Sophie Kennedy Clark in these scenes), had a child as a teenager. Her family abandoned her at a convent where Philomena was forced to work for four years to pay off her debt for the nuns helping her with the childbirth. Without warning, one day her son Anthony is adopted and taken away from her. Now, just after her son’s fiftieth birthday, Philomena decides again to try to find the boy she lost.

Uninterested at first, Martin decides to go along with her to the convent to dig up any records they might have. They are told that almost all of the records were lost in a fire. In fact, the one record they still have is a document that shows Philomena gave up any and all rights to know anything about her son. At a nearby pub, Martin learns that the fire in question was not an accident; it was a bonfire in which the nuns destroyed most of the adoption records they held. He also learns that the convent sold the children to prospective parents for 1,000 pounds each, mostly to Americans. So, on the insistence of his editor Sally (Michelle Fairley), Martin heads to the U.S. with Philomena in tow.

I won’t summarize past this, because what happens is best left undiscussed in the specific. Suffice to say that while there are a few moments of comedy, most coming from Philomena’s charming naivety, the second and third acts of this film are not in the slightest a comedy.

So, while Philomena was mis-marketed badly, there are a lot of reasons to see this. Judi Dench tops the list here, of course. She’s Judi Dench, after all, and she’s great in everything she does even if the movie itself isn’t good. Steve Coogan is also very good in this. Again, the trailer makes him out to be a frustrated and exasperated surrogate son for the title character, but he’s much more and much more nuanced. The two of them carry the entire film, and they’re more than enough to carry it.

It’s also an engaging story made all the more engaging because it’s based on a real story of the real Philomena Lee and her search for her son. Frequently the movie has daydream sequences where Philomena thinks about what may have happened to her son; some of these are actual home movies of the real adopted son of Philomena Lee. It’s the sort of story any journalist would kill to have. It’s filled with duplicity, dirty dealings by the church, and vindictiveness disguised as self-righteous behavior. It’s hardly surprising that I’m pleased when a film depicts any church as being underhanded and shady.

Philomena is not the sort of movie I would claim to enjoy, but it’s an easy one to admire. The cast is good, with both Coogan and Dench being stellar. The story is immediately engaging and told beautifully. It’s perfectly paced throughout. The ultimate confrontation is surprising and while not particularly uplifting, it’s at least honest and in its own way redeeming.

Just don’t believe the trailer for a second. The trailer is a damn liar, and whomever made that thing ought to be beaten with sticks.

Why to watch Philomena: It’s really very good.
Why not to watch: The trailer is pure fertilizer.