This is the tenth in a series of twelve films suggested by the guys at YourFace. This is Jason’s fourth and final pick. 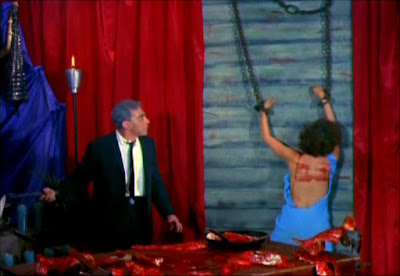 When I agreed to take on the task of watching 12 movies from Jason, Nolahn, and Nick, I kind of expected to be at least partially buried in low-budget oddities and schlock. I was willing to do exactly that. I also expected a good deal of horror, but only Jason gave me straight horror movies in The Signal and today’s movie, gore “classic” Blood Feast. The minute I got everyone’s list, I knew that Blood Feast would be the October movie. I mean, how could it not be?

Blood Feast is famous, or perhaps infamous, for its lack of budget, terrible acting, and extreme gore. In fact, it’s the gore that’s really the only reason for the film. The goal of Blood Feast was to put as much violence on the screen as possible with as much artificial blood (and it really does look like Italian horror film red paint) as could be used. That is literally the only thing the movie has going for it. This is a master class in bad acting, non-existent direction, sloppy camera work, moronic characters, bad plotting, and oppressive music that consists of little more than tympani, massive organ chords, and brass instruments playing the same two notes over and over. There are moments of someone sawing a cello as well.

So let’s look at the plot. In a suburb of Miami, a serial killer has struck multiple times, killing young women and hacking off a body part before leaving the corpse. Police are stumped by a complete lack of evidence even though it’s evident from the murders we see that our killer isn’t doing things like taking basic precautions against leaving trace evidence like fingerprints or footprints or blood trails. The killer is a man named Fuad Ramses (Mal Arnold), who is trying to revive the goddess Ishtar. The way to do that is a ritual called a Blood Feast. He gets a reason to have the feast when he is hired by Dorothy Fremont (Lyn Bolton) to cater a party for her daughter Suzette (Connie Mason).

As it happens, Suzette is a student of Egyptology and her boyfriend is Detective Pete Thornton (William Kerwin), the cop who is in charge of the case. No one can figure out that Fuad Ramses is the guy performing the murders and that it’s connected to a cult of Ishtar despite the fact that they hear a lecture on the cult and even on the Blood Feast itself. Seriously, these are very dumb people.

Yes, Blood Feast is trash. Seeing a guy rip a woman’s tongue out with his bare hands has no place in anything like decent cinema. But there is a question that needs to be asked when it comes to Blood Feast. It can’t be said that Blood Feast made extreme gore palatable or decent, it can be said that it made such sights in films possible. It’s a legitimate question to ask how much responsibility Blood Feast has for modern horror films. Would something like Night of the Living Dead have been possible without Blood Feast? Would The Texas Chainsaw Massacre? Halloween? Or any others of a host of classic horror and gore movies?

In that role, it’s difficult not to have a sort of grudging respect for Blood Feast. As incompetent as the movie is, it caused something like a revolution, or at least an evolution of the industry. And don’t get me wrong—this is incompetent in the extreme. Once they figure out Fuad Ramses is the bad guy, they take so long to get there that Ramses has time to cook all of his “dishes” before they arrive. It’s like they’re showing up from another state.

So I’m going to say something here that might come off as a shock. For as incompetent and stupid as Blood Feast is, I think it should have been included on the 1001 Movies You Must See Before You Die list. There are certainly other terrible movies on the list, but aside from Within Our Gates, I’m not sure there’s one that had this much of an impact on history or a particular genre.

As a last comment, I always wonder where they find people to act in films like this. “Hey, Grandma, we’re making a film that will have buckets of blood in it. Want to do a walk-on?” There’s so much here that doesn’t make sense. When the police finally arrive at Fuad’s shop, they’re surprised that there aren’t a bunch of bodies in the front of the store (“Maybe we should check the back!”). Even better, they find a body, the camera moves slowly down the bloody corpse head to foot…and there’s a salad between her feet.

Almost against my better judgment I’m giving this full marks, if only because there are a lot of movies that I really like that almost certainly wouldn’t exist if Herschell Gordon Lewis hadn’t decided to put as much splatter on the screen as he could, and damn the cost. Gentlemen, you’re 8.5 for 10.

Why to watch Blood Feast: There’s nothing else like it.
Why not to watch: It’s terrible.