The State of Denmark 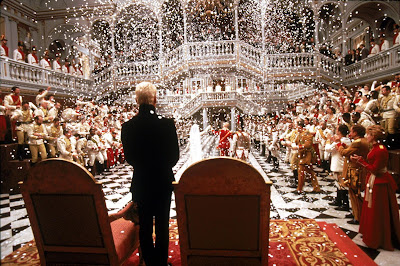 I’ve seen four cinematic versions of Hamlet. From worst to first, I would rank them with the German version made for television (and skewered on Mystery Science Theater 3000) as the worst, the 1990 version with Mel Gibson good but sort of “Hamlet-lite,” the 1948 Best Picture winning Olivier version as a traditional and solid version, and Branagh’s 19th-century reimagining as the best. This is not the first time I’ve hunkered down for Branagh’s 4+ hour version of Hamlet, and I was happy to watch it again because I think it’s the best film version available. I know there are others. I’ve heard the Ethan Hawke 2000 version is good or at least interesting. I may get there someday.

I’m not going to run through a plot summary of Hamlet. If you don’t know the story, shame on you or shame on the school system you came up through. You’ve had more than 400 years to familiarize yourself with Hamlet, so if what follows ends up being a spoiler, you have only yourself or your old literature teachers to blame.

Branagh’s version of Hamlet is unabridged, meaning he includes the entire text of Shakespeare’s play. This is the first time anyone had done this on film, and it makes for a very long sit. He also updated the look of the film, moving it in appearance from the pre-Elizabethan setting Shakespeare gave us and put it in the 19th century as mentioned above. He did not change the language, though. However, the Elizabethan of Shakespeare works really well with the updated costumes and period. There is no disconnect here as there can be with some reinterpretations of Shakespearean texts.

Branagh also filled the film with interesting cameos, particularly in a few roles that have only a couple of lines or no lines at all. We get John Gielgud and Judi Dench in a flashback sequence when Hamlet tells the story of King Priam. Non-Shakespearean actors abound. Robin Williams shows up as Osric in the final act, Billy Crystal plays a brilliant version of the gravedigger, and Charlton Heston is cast as the Player King. Also featured in small roles are Jack Lemmon and Gerard Depardieu.

What makes the Branagh version really work for me is the exapansiveness with which the film is made. Branagh allows himself not to deviate from the text, but to deviate from what could be easily shown on screen. We get flashbacks during soliloquies, for instance, and tales being told acted out in front of us rather than simply seeing the actors reciting lines. In other words, Branagh took the text provided by the play and didn’t simply film the play. He turned it into an actual film.

There are, of course, some excellent performances. Brian Blessed shows up as Hamlet’s father, and he is a staggeringly impressive armored ghost. Derek Jacobi and Julie Christie are uniformly excellent as Hamlet’s murderous uncle Claudius and his doomed mother Gertrude respectively. Other important casting decisions concern Nicholas Farrell as Hamlet’s friend Horatio, Michael Maloney as Laertes, and Richard Briers as a believably obsequious Polonius.

The two most critical casting decisions here, at least in my opinion, are Hamlet himself (Branagh, naturally) and Ophelia (Kate Winslet). Branagh, of course, is a Shakespearean actor and he demonstrates that here thoroughly. He eliminated almost all of the oedipal undertones of many of the earlier versions (a good choice) and also decided to make Hamlet more mad by design than teetering on the brink of madness as happened in many other versions. I like the mania with which he plays the role in those scenes where Hamlet is designed to be acting madly. There’s more cunning and less neurotic behavior from him, and it’s a decision that works.

Kate Winslet, though, makes the film for me. It would be another year before half the planet went Kate Winslet-crazy on the release of Titanic, but anyone who saw Hamlet could tell that this was a woman bound for stardom. A large part of the reason this is my favorite version of the story comes from her performance of Ophelia when she has finally lost her mind after her rejection by Hamlet and the death of Polonius. I can’t help but think that the Academy missed completely by not nominating her for Best Supporting Actress. Her insane version of the character is as good as these things get.

I’m well aware that strapping in for a four-hour marathon film isn’t everyone’s cup of tea. Frankly, it’s not always mine, either. I have to be in the mood to dedicate this much time in a given day to a single film. But there are few films that warrant a full four-hour treatment. Hamlet is one of those rare films. Despite the length, there’s very little dross here. Oh, the story could stand a cut or two—the dumb show before the Murder of Gonzago isn’t really necessary, but such cuts might eliminate 15 minutes or so from the total length. Ultimately, there’s not that much difference between a film that runs 3:45 and one that runs 4:00, so the inclusion of these small scenes doesn’t affect me one way or the other.

But is it good? It is. It’s grandiose and extreme and wonderful because it is those things. This is the way to do Shakespeare on film. Branagh managed to take a great story and, by doing more than simply filming the actors reproducing a stage play, create something more than simply a reproduction of the source material. That’s the power of film, and it’s something that Branagh has done well with Shakespeare adaptations in the past.

For a production of this size, there are a lot of decisions to make. He made the right ones in almost every instance, and the places where I might have done something different are minor enough that I’m not bothered by them. This is, to me, the definitive cinematic Hamlet, and someone would have to produce something incredible to eclipse it.

Why to watch Hamlet: The best-available version of the greatest English-language drama ever done.
Why not to watch: It’s four hours long.