Only a Bird in a Gilded Cage 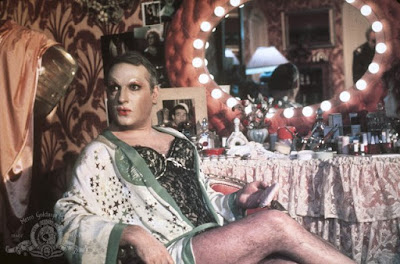 A new quarter at the school where I work begins tomorrow, which means I’ll have a harder time with foreign films again in upcoming weeks. That being the case, it made sense to knock on the one sitting on the table in front of me today: La Cage aux Folles. I hadn’t seen this before except that I kind of already had. I’ve seen the American remake from the ‘90s starring Robin Williams, Gene Hackman, and especially Nathan Lane. That 1996 film is not merely a remake in spirit of this French original. They are very much the same movie.

Renato Baldi (Ugo Tognazzi) owns a transvestite cabaret club called La Cage aux Folles in Saint-Tropez with his partner and star of the show, Albin (Michel Serrault). Albin is not merely a diva on stage; he’s constantly worried that Renato is cheating on him and that everyone laughs at him behind his back. This night is a special one, though—Laurent (Remi Laurent) is returning home. Laurent is Renato’s son, conceived in a one-time heterosexual fling with Simone (Claire Maurier), but has been raised by Renato and Albin as the equivalent of father and mother respectively.

Laurent has returned with news; he’s getting married to a girl named Andrea Charrier (Luisa Maneri). What Renato and Albin don’t understand is that Andrea’s family is seriously conservative. Seriously. Her father Simon (Michel Galabru) is the deputy of a political group concerned with moral correctness. On the day that Andrea tells her parents that she is getting married despite their objections, Simon is hit with devastating news. The leader of his party has been found dead in the arms of an underaged black prostitute, making the entire movement (and Simon’s career) a joke. His wife Louise (Carmen Scarpitta) convinces him that a white wedding, with blessings from the Pope, would be just what Simon’s party needs.

So off go the Charriers to meet Laurent’s parents, two people who are as diametrically opposed to them as possible. Complicating matters is the Baldi apartment, covered as it is in homoerotic imagery and statues, and sitting as it does above a transvestite cabaret show. Manservant Jacob (Benny Luke) doesn’t help matters, either, since he is almost as flamboyantly gay as Albin. And of course, there are reporters following the Charriers everywhere they go. Toss in a possible appearance from Simone, and there are many things that can and do go wrong. Comedy ensues.

In a situation like this I almost always like the original version of the film better than I do the remake. In this case, I think The Birdcage is superior to La Cage aux Folles for several important reasons. One major reason is that it delves more deeply into the characters, particularly that of Albin (Albert in the American version) and gives us a lot more of the relationship between the two men. It’s that relationship that is the most interesting one here, and La Cage aux Folles shorts it.

A bigger issue is that the American version is simply a lot funnier. La Cage aux Folles takes a long time to build up to the scene that we really want—the dinner between the Charriers, Renato, and Albin in drag. Once we get there, we don’t have a lot further to go until the end of the film, and that’s disappointing. The American version gives us more of this, and it’s funnier because of it. We also get a lot more of the manservant in the American film, and he’s a character that was worth exploring.

It’s worth mentioning as well that Laurent is extremely dismissive of Albin. It’s certainly true that Andrea’s parents wouldn’t approve of a young man raised by a gay couple, especially a gay couple that are in that line of work, but Laurent demands a complete redecoration of the apartment and essentially the banishment of Albin so that he won’t embarrass anyone while Andrea’s parents are there. To the film’s credit, this isn’t really played for comedy, but the pain experienced by Albin from this direct rejection of who he is by the child he raised is ultimately pretty sad. Laurent doesn’t come off well because of this.

La Cage aux Folles was made in a time when gay couples were easy targets for ridicule and fear. For that reason, the film is pretty important. It’s noteworthy in that it also depicts a gay couple that has provided a stable home for a child. In fact during the film we witness Renato’s and Albin’s 20-year anniversary of being a couple. That was almost unheard of in media for this era, which makes the film progressive on that front as well.

Ultimately, I like La Cage aux Folles, but I genuinely like the American remake more. With a film made in the ‘90s and featuring the comic brilliance of Robin Williams under the guidance of a good director, the boundaries were able to be pushed a lot further. I won’t doubt the importance of tis for its time, but if I only had to pick one, I’d pick Nathan Lane’s Albert over Michel Serrault’s Albin every time. I know I’m in the minority on that and I don’t care. The majority is wrong.

Why to watch La Cage aux Folles: It’s remarkably progressive.
Why not to watch: So help me, the American version is funnier.