Ten Days of Terror!: The Brood 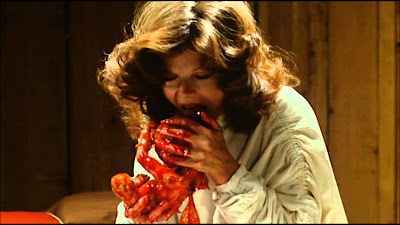 When you write about a David Cronenberg movie, you have to be prepared for the body horror. That’s beyond a cliché when it comes to talking about Cronenberg, particularly in his earlier years. There are a few films that are deep enough that body horror can be touched on without being the main theme of the review. That’s not the case with The Brood, since this is a film that is almost exclusively about building up to the last 15 minutes and one of Cronenberg’s most disturbing scenes. In fact, I might go so far as to say that The Brood is much more a psychological thriller until we get to the final act, when it goes full-on into horror.

We start with some rather ridiculous psychological premises. Dr. Hal Raglan (square-headed Oliver Reed) has developed a new technique he calls psychoplasmics. Essentially, he forces his patients to undergo traumas from their past, which then manifest on their skin as welts, bruises, cuts, and other sundry injuries. His prize patient is Nola Carveth (Samantha Eggar), who is dealing with an alcoholic and abusive mother, and alcoholic and weak-willed father, and an estranged husband. Part of her worries with her husband Frank (Art Hindle) concerns custody of their daughter Candice (Cindy Hinds). For now, Candice stays with her on weekends, but when she returns with scratches and bruises, Frank wants to put a stop to those visits.

Meanwhile Nola’s mother Juliana (Nuala Fitzgerald) is murdered by, well, something like a mutant child. Shortly thereafter, Nola’s father Barton (Harry Beckman) is similarly killed, but this time, the police also manage to get the body of the killer, who dies for unexplained reasons. This killer is sort of human, but sort of not. It has no visible gender, strange anomalies with its eyes, no teeth, and evidently has no navel. Think this weird creature might be connected to Nola? Think it might have something to do with psychoplasmics?

Of course that’s the case. We get a series of murders—the two mentioned, Candice’s school teacher—all by mutant, genderless dwarf children. Eventually, Frank figures out that Nola and possibly Dr. Raglan might be connected with what is going on. This sets up a confrontation scene, which results in a moment of shock horror that is certainly unique for its time. I’m not going to spoil it, because it really needs to be seen to be believed. Just know that the mutant children are coming directly from Nola, and the process of their gestation and birth is particularly horrifying and memorable.

The Brood is a difficult film to judge. It does have that truly iconic moment near the end, a moment of film that is still really disturbing and purely Cronenberg. The prosthetic work alone would look at home in Naked Lunch or eXistenZ, but it’s the moments that follow the prosthetic reveal that are truly disturbing. From a horror perspective, it’s the money shot. There are some other awful moments here, too, like the teacher (Susan Hogan) being beaten to death by mutant children in front of her students.

The problem is that these moments come too late in the film. For something that ends up as a horror film, The Brood takes a long time getting there. There’s a certain amount of expectations from the audience, and it doesn’t deliver until the running time is almost done. In fact, for a good deal of the running time, I was wondering why this was classified as a horror movie at all. Sure, there’s some gruesome deaths in it, and those deaths are caused by something unnatural, but that still doesn’t a horror film make.

So I find myself in the position of potentially ripping a horror movie that is considered at least by some to be an iconic film for the genre. This thing has a Criterion edition, for fuck’s sake. But the truth is, this isn’t much of a horror movie until the end. So while we get quality, the quantity leaves a lot to be desired.

I think The Brood is worth seeing, but I have to admit that I expected a lot more than what I got. Cronenberg’s distinct style of biological mutation nastiness may have started here (I haven’t seen Rabid or Shivers yet) and so this is definitely a formative movie for his oeuvre. But if that’s the case, he got a lot better with what he wanted to show and how he wanted to show it. This is good for showing Cronenberg as a director and for demonstrating his growth in the director’s chair. But there simply should be more scares here and this should be better, especially with its decent cast.

Why to watch The Brood: One of the most iconic horror scenes around, even if the film has been somewhat forgotten.
Why not to watch: It’s not much of a horror movie for the first 75 minutes.