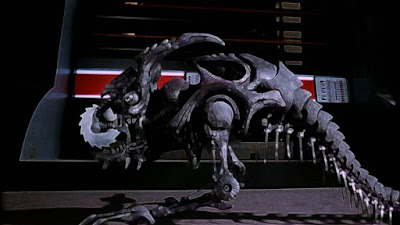 I can’t remember the last time I’d seen Screamers, but it’s been years. I still remembered the basics of it, though. Screamers is a film with a solid pedigree despite its B-movie science fiction/horror sensibilities. It’s based on a story by Phillip K. Dick for starters, and it was adapted by Dan O’Bannon, who is rightly more famous for having written both Alien and Aliens. Seeing it now and knowing what I know, there’s some evidence that O’Bannon took some ideas from this to write Aliens, and then took them back when he adapted this into a screenplay.

Knowing the pedigree here is kind of important, though, because Screamers comes across very much like a movie that wants to be Aliens. There are a lot of the same elements here as in Aliens, although the earlier movie is better in almost every respect. That’s not a knock on Screamers; Aliens is one of the better science fiction movies in cinematic history.

The text crawl at the start gives us the backstory. A company called the New Economic Block has been mining on Sirius 6B. War has broken out between the company and the scientists and miners, who call themselves the Alliance. This has turned the planet into a wasteland. The planet has been significantly devastated by devices called Armed Mobile Swords, nicknamed “screamers.” Alliance scientists created the devices as anti-personnel weapons and protect themselves with personal devices that render themselves invisible to the screamers. Essentially, screamers are buzzsaws that move just under the ground and rush to attack anything with a pulse. They are also self-replicating, an idea that will become important later in the film.

The Alliance forces are led by Colonel Joseph Hendricksson (Peter Weller), who is assisted by Chuck Elbarak (Ron White). They receive a message that peace is being sought by the NEB, but to reach an accord, Hendricksson and another member of the Alliance need to come to the NEB base. Chuck would seem to be the natural candidate to go with him, but a new candidate almost literally falls out of the sky when a ship of Alliance troops crashes in the area. The lone survivor, Ace Jefferson (Andrew Lauer) is elected to accompany Hendricksson while Chuck mans the base.

The two soon encounter a young boy named David (Michael Caloz) who has somehow managed to survive on the planet. That mystery is solved when the group nears the NEB base and the occupants shoot David, demonstrating that he is, in fact, a new and more advanced type of screamer. The occupants of the base are Ross (Charles Edwin Powell) and Becker (Roy Dupuis), two NEB grunts, and Jessica Hanson (Jennifer Rubin), a black marketer. She agrees to get Hendricksson to the main NEB base and he agrees to take her back to the Alliance side with him when whatever happen has happened. But naturally there’s plenty of paranoia and lots of screamers to deal with first.

It’s evident early on that Screamers really wants to be Aliens. All of the major plot points of Aliens show up here—it’s based in the military, the people involved are fighting a war against an implacable enemy that is evidently without emotion, and more. There’s even the veneer of a child in danger, although Screamers subverts that trope pretty quickly. But this I very much the same film at its heart, albeit with far less of a budget and much less invested in the characters going in. It’s a shame, too, because the comparison is such a natural one. This makes it difficult for Screamers to stand on its own merits.

That really is the biggest knock against Screamers. While it evidently had a budget of $20 million, not all of that appear on the screen. I’m not sure specifically where all the money went, but what’s on the screen could have used a consultant, Screamers for the most part looks like it was made with half of the budget it had.

So this isn’t a perfect movie. But is it a good one? It’s not bad. It’s definitely in the lower tier of films created from the work of Philip K. Dick at the very least, but it’s a pretty inventive and interesting story despite its being almost wholly dependent on the earlier work for where it goes and how it gets there.

In short, Screamers isn’t going to set the world on fire, but for a sold science fiction horror movie, it’ a pretty solid choice. I like it a little better than it deserves, but I admit to a soft spot for Peter Weller in this part of his career.

Why to watch Screamers: Sci-fi horror in the vein of Aliens.
Why not to watch: It’s not Aliens no matter how much it wants to be