I've Got My Philosophy 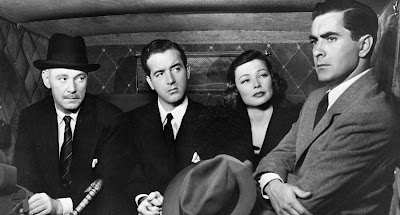 Older movies are often preachy. It more or less comes with the territory, and so I try to ignore it whenever I can. With a film like the Razor’s Edge, though, the moralizing happens a lot in the first part of the film. It more or less goes away in the second two acts, but boy is this thing preachy at the start. The good news is that if you can bear down on the film for the first hour or so, it opens up into something that becomes interesting.

Larry Darrell (Tyrone Power, and a part of me hopes that this character’s middle name is also Darrell) has returned from World War I in a deep psychological funk. On the last day of the war, one of his friends died, and specifically died saving Larry’s life. Larry’s existential crisis has led him to a place where he is motivated only to determine what his life means. He’s turned down so potential jobs to “find himself,” which means heading to Paris and delaying his proposed marriage to Isabel Bradley (Gene Tierney). This is all to the good in the opinion of Elliott Templeton (Clifton Webb), Isabel’s uncle. Elliott is not a fan of Larry because Larry has turned down multiple chances to join society and has opted instead to be a much more common man.

Instead, Larry loafs, living off his inheritance. Meanwhile, his upper class friend Gray Maturin (John Payne) pursues Isabel and his friend Sophie (Anne Baxter) marries a man named Bob MacDonald (Frank Latimore). Tragedy strikes a few years later when Bob and Sophie’s infant daughter are killed in a car accident. Isabel goes to Paris to attempt to woo Larry back to the States and earning a living, but Larry is still uninterested. This causes Isabel to break off their engagement, and eventually she marries Gray. For his part, Larry begins working in a coal mine, where he meets a German defrocked priest named Kosti (Fritz Kortner). Kosti tells Larry to find enlightenment in India, which he does. This ends the preachy part of the story.

From here, we get a surprisingly non-preachy fulfillment of Larry’s new philosophy of life. We learn that Elliott Templeton has continued to pursue moving in the best circles in Europe while Gray and Isabel suffered terribly in the stock market crash of 1929 and are living with Elliott while Gray recovers his nerves. Sophie, now a hopeless drunk, is also in Paris living in the past. Naturally, Larry has returned to Paris as well. He uses his new-found sense of peace to try to help Sophie off the bottle and to gain some sense of peace for Gray and even Elliott, who still disapproves of him. Meanwhile, Isabel, still in love with Larry, plots against everything he does in an attempt to bring him back to her.

There are a number of interesting things at work here. One of the most interesting is that the actual author of the story, W. Somerset Maugham (Herbert Marshall) appears as himself in the fictional work. Maugham simply happens to be in the area for most of the major events of the story, often acting as the narrative link between characters and events. He doesn’t actually intruded in the narrative that much, but serves as a witness for many of the events that happen, adding a sense of authenticity to the proceedings even if those proceedings are entirely fictional.

The most interesting character change here is Isabel. Initially, she is pretty much what we expect from a woman character from a film made in the 1940s. As the film goes on, she slowly but consistently morphs into a femme fatale from the best of film noir, conniving and plotting to get what she wants, and damn the cost. At the beginning of the film, Isabel’s actions are understandable and even sympathetic. By the end, she is a pure embodiment of entitlement and selfishness.

The film also handles the old storytelling adage of showing rather than telling brilliantly. No one tells us that Isabel has slowly become scheming; we see it happen. No one ever says that Elliott Templeton, who considers himself a great man of importance and position is actually a petty little bastard; we just see him act that way and reach the conclusion ourselves. Clifton Webb as nominated for Supporting Actor for his role as Elliott, and Anne Baxter won for Supporting Actress for her turn as Sophie, and both were solid nominations.

The biggest issue suffered by The Razor’s Edge is the set-up. It takes us a long time to get to the place where the really interesting parts of the movie actually start. That first hour is necessary to get us to that mental place; I’m not sure how the film could have been made to give us the necessary exposition for the second two acts, but the first act is pretty rough. This is especially true when Larry begins espousing his philosophy after a sojourn on a mountain top in India. Thankfully, the preaching and moralizing happens only in places. It’s heavy-handed at first, and once we get past Larry’s enlightenment, things move along at a much better and more interesting clip.

I ended up liking this based on the strength of the last 90 minutes or so of the film. If you can muscle past the opening parts to get to where Larry needs to get to, the film opens up into something fascinating and surprisingly different from many films, even if the philosophy being espoused is one that will seem very familiar to virtually anyone. If a way could be found to tighten up that first act, The Razor’s Edge might well be remembered as a classic.

Why to watch The Razor’s Edge: The second two acts are excellent.
Why not to watch: The first act is too long and very preachy.

Posted by SJHoneywell at 7:19 AM