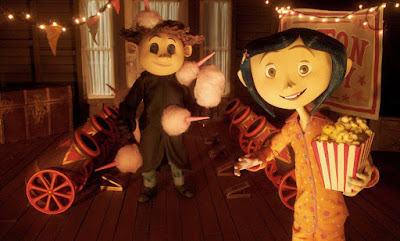 I remember liking Coraline the first time I watched it. I thought it was a cool story, and one that would likely interest kids because of its fascination with creepy things. There are some real scares in the film, and I think that a lot of kids like to be a little scared. Plenty of animated movies have a stripe of darkness running through them, and I appreciate it when a film designed for kids is willing to explore that and not shy away from going dark.

So I was certainly interested in watching the film again. I hadn’t seen it since its original release and while I remembered the basics of it, I didn’t remember the specifics. One thing I remember vividly is that my older daughter (11 at the time) was upset at the inclusion of the character Wybie, who was not in the book. In her world at that time, that meant that it was a terrible, worthless version of the original story. Gail didn’t like Coraline on her first viewing. I don’t know what she thinks of it now.

Anyway, young (10-12-ish) Coraline Jones (Dakota Fanning) and her parents Mel (Teri Hatcher) and Charlie (John Hodgman) have moved from Michigan to Oregon. Coraline is not a fan of the move and doesn’t like the new place they’ve moved to. Everyone who lives nearby is old with the exception of Wyborne “Wybie” Lovat (Robert Bailey Jr.), who has all of the markers of being the local weird kid. Even weirder, he gives her a doll that looks exactly like her and claims that he found it in his house. Coraline is bored and lonely and her parents are busy working on a gardening catalog. Her father tells her to explore the house. In so doing, she finds a small door in one room. With the promise that she’ll stop bothering her mother if she’ll unlock the door, Coraline discovers that the area behind the door is bricked up.

That night, however, she has a bizarre dream in which the door is not bricked up. She follows a horde of jumping mice through what can only be called an umbilical into a mirror image of the real world. Sort of. It’s essentially a Coraline-centered version of reality. Her Other Mother makes delicious meals, her father writes songs about her, and there is a garden planted so that it looks like her from above. There’s even a version of Wyborn in this world, but this one can’t talk. Even her neighbors are different. Sergei Bobinsky (Ian McShane) in the real world is a crazy old Russian trying to train mice for a circus. In the alternate world, the mice can actually perform. Miss Spink (Jennifer Saunders) and Miss Forcible (Dawn French) are ancient former burlesque performers in the real world; in the alternate reality, they are young and beautiful.

There are two significant telling differences between the worlds. The first is that Wybie’s cat can speak in the other world (and does so in the voice of Keith David). The second is that everyone in the alternate world has shiny buttons for eyes. But that world is perfectly magical, and everything there is to Coraline’s liking. So she’s tempted when her Other Mother offers to let her stay in the alternate world forever. The only catch is that she has to have buttons sewn onto her eyes, something Coraline doesn’t want.

It’s a pretty complicated story, and it’s a huge point in Coraline’s favor. One issue that a lot of movies made for children have is that they keep things too simple, assuming that a younger audience will have some difficulty following the story. That’s not been my experience. For as complicated as this story is for a younger audience, I’ve never seen a kid not be able to follow it. My younger daughter was 7 when this came out, and she had no trouble keeping up with the plot.

What I didn’t remember about Coraline turns out to be the part I had the most trouble coming to terms with. Coraline as a character isn’t a nice person. She’s rude, mean to her parents, dismissive of Wyborne and the neighbors and has a great deal of attitude. Not the “attitude” that is designed to sell products to teens, but the sort of attitude that gets kids grounded or sent to detention.

Because of this, Coraline’s sudden desire to return home and find her parents doesn’t come across as strongly as it should. Through the first half of the film, her mother is openly hostile to her and her father is a virtual absentee parent. There’s nothing good or nice about her life, which actually goes a long way to explaining her attitude. Her sudden shift from enjoying the alternate world to wanting to leave and find her parents feels artificial, or at least more artificial than it should.

Is there an answer to this? Yes—the entire world and the whole story are seen through Coraline’s eyes. Essentially, the behavior of her parents comes across as extreme and dismissive because this is how Coraline is seeing it, not because this is how things actually are. It helps a little in squaring the problem mentioned in the previous paragraphs.

Of course, the real sell here is the look of the world and the animation. It’s hard not to be impressed with the work that Laika did on Coraline. It is uniquely beautiful and gorgeously animated. That alone could have earned it a nomination.

Ultimately, I like Coraline, but I have problems with the last few minutes. I won’t spoil it for those who haven’t seen the film, but I do take issue with a change in the ending so severe that it includes the necessary participation of a character who didn’t exist in the book. There was a way to have the book’s ending here, and it’s a way that speaks better of Coraline as a character. Fix that, and my opinion bumps at least a half-star.

Why to watch Coraline: Inventive story, inventive animation.
Why not to watch: Coraline’s not as nice as you remember her.