Ten Days of Terror!: Night of the Comet

Film: Night of the Comet
Format: DVD from NetFlix on laptop. 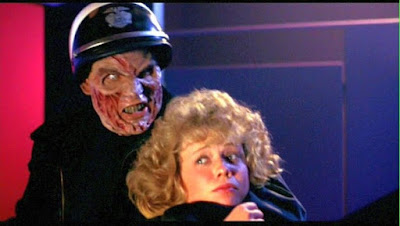 Night of the Comet is one of those movies that separates the horror nerd from the rest of movie fandom. While there will be a few exceptions here, this is a movie that you either love or have never heard of. I don’t know anyone personally who has seen Night of the Comet who doesn’t appreciate it for what it is. This is a spin on a classic end-of-the-world scenario done with humor, some great characters, and a lot of entertaining qualities. I was so pleased to see this show up the other day and couldn’t wait to watch it again.

Let’s get to the horror movie tropes here so we can talk about the fun stuff. The Earth is in the path of a comet that is on an incredibly long trajectory. In fact, scientists estimate that the last time this comet passed near the planet was about 65 million years ago, which just happens to coincide with the disappearance of the dinosaurs. The people of Earth are promised a spectacular light show as the planet passes through the comet’s tail, and for whatever reason, almost everyone in the Los Angeles area is excited by the prospect of seeing a comet fly by.

Regina (Catherine Mary Stewart) works at the local movie theater and has decided to forego comet watching to spend the night in the projection booth with her boyfriend Larry (Michael Bowen). She asks her Valley Girl sister Samantha (Kelli Maroney) to tell their step-mother Doris (Sharon Farrell) that she’s going to see the comet at the observatory with her science class. Ah, but tensions are running high between Doris and her step-daughters, and she ends the conversation with Samantha by punching her in the face.

Cut to the next morning when we discover that the comet has turned everyone who wasn’t protected from its effects into a fine red powder. Those who were only partially protected have become crazed zombie-like creatures. Larry is quickly punked by a zombie, which Regina avoids. She goes home to discover that her sister spend the night in a steel-lined garden shed, which kept her safe. The two are virtually alone and head to a local radio station only to discover that it’s automated. But it is here that they mean Hector (Robert Beltran), a truck driver who spent the night inside his truck, keeping him safe.

We get some zombie encounters, the girls go shopping at the local mall where they encounter a few zombies themselves, and we also get to meet a group of local scientists who tried to avoid the comet’s effects in their underground bunker but caught a dose of it by accidentally keeping the ventilation system open. The scientists are working on a cure for their descent into zombie-dom and dissolution (the zombies will eventually dry up and die) by creating a serum from th blood of survivors. So, not only do the zombies want to kill our heroines and Hector, the scientists want them for the precious bodily fluids.

Where Night of the Comet succeeds is in playing with these various tropes. The zombies, for instance, are not the mindless undead flesh-eating monsters, which in a lot of minds would make them not zombies at all. These are monstrous and violent creatures, but they are intelligent and even capable of speech. In fact, the stock boys encountered by Regina and Samantha are not merely intelligent, but are sadistic and calculating.

It’s the characters that really sell the movie, though. Samantha is the typical horror movie dip, but in this post-apocalyptic world, she comes across as more comedic than anything else. She’s initially happy not to just have survived, but to have had all of her potential problems and responsibilities removed. It’s Regina who is the great central character, though. It’s interesting that the film makes her sexually active and even promiscuous and offers no moral censure for this, as would be typical in a horror film. Additionally, Regina is an ass-kicker, explained by her father being a high-ranking military officer who has taught his daughters self-defense and how to shoot. Regina comes across as Buffy the Apocalypse Survivor more than anything else.

Night of the Comet works because it’s smart. It knows exactly what the major beats are to be in a horror movie and it goes there, but plays with them. Just as we expect them to do, Regina and Sam go to the mall and “shop” since they have nothing else to do. It’s straight out of Dawn of the Dead, but it’s also different enough that we buy it. Better, when the scientists show up to find them and see the radio station abandoned, they immediately determine that two teenage girls are most likely to go to the mall with nothing better to do. There’s comedy here, but it’s comedy that doesn’t insult the intelligence of the viewer.

Okay, Night of the Comet isn’t a perfect movie, or even the best horror movie of the 1980s. But it is probably the best horror/comedy of the 1980s because it knows when to take itself seriously and when to play for laughs. Even better, it holds together beautifully and makes internal sense in everything it does.

If you haven’t seen this, you should. If you’re at all a fan of horror/comedy, or even just horror, this is a must-see if you want to claim any level of nerd credibility.

Why to watch Night of the Comet: It’s everything there is to love about ‘80s horror.
Why not to watch: You’re a sad, sad, person.

Posted by SJHoneywell at 7:12 PM