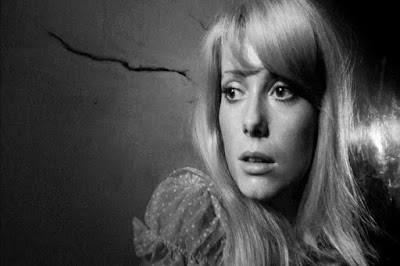 When I look at 1965 and the Best Actress category, I see what I think is a clear winner and filler. That doesn’t happen that often, but in this case, all of my work comes in ranking 2-5, not in the top position. If we open up the field to non-English language performances, I still have a clear winner, but things potentially get more muddled below the top rank. I’d have liked a nomination for Catherine Deneuve for Repulsion, for instance, and were she nominated, she’d rank pretty high for me. It’s worth saying that I could see a nomination for Giulietta Masina for Juliet of the Spirits even if I wouldn’t go there. Julie Christie was already nominated for Darling, which would seem to preclude her nomination for Doctor Zhivago.

5: I didn’t exactly pan A Patch of Blue when I reviewed it, but I didn’t love it, either. I can see some of the arguments made in the comments of that review, but the film fell flat for me and I didn’t get a lot out of it. Elizabeth Hartman’s nomination is the one that puzzles me the most. She plays a naïve who also happens to be blind, and I think that’s what earned her the nomination. I can see this role being done a lot better by a lot of actresses of the era. It feels like Hartman was nominated for the role, not for the performance.

4: I consider myself a fan of Simone Signoret, so I don’t like putting her in fourth place in anything. But that’s where she belongs in this race. I liked Ship of Fools well enough, but I have very little memory of her specifically in the film. Mostly, I remember Lee Marvin and Vivian Leigh. It’s hard to push for a performance that leaves that little behind. Simone Signoret was a wonderful actress, and I have no doubt that she was excellent in this. But I simply don’t remember her, and that’s pretty damning.

3: I hate The Sound of Music. I really, really hate every saccharine moment, every glurge-inducing guitar chord, every second of Austrian children traipsing around in fleur-de-lis lederhosen. But I can’t honestly say that Julie Andrews didn’t deserve a nomination here. On a strictly emotional level, I’d love for that to not be the case, but it is the case. Sure, the film makes my gorge rise, but it’s simply the truth that objectively, she deserved to be on the list. She just doesn’t deserve to be any higher than third.

2: Julie Christie won this Oscar, and I think it’s fair to suggest that she won not just for Darling but also for Doctor Zhivago in the same year. She had a good year, and that’s what won her the statue. I didn’t love Darling, but I do think that Christie’s performance in it is one of the best of the year. She does a lot with expression and gesture here, and conveys a great deal of emotion without seeming to do much. I know I’ll get at least one objection from putting such an unpleasant character this high on the list, but the performance is a masterful one.

1: For me, the clear and obvious winner is Samantha Eggar in The Collector. Eggar is forced to carry more than half of the film. She’s one of only two real characters and she’s also the character who must elicit our sympathy and concern. She does this brilliantly, and often with just a change in facial expression. We are terrified for her through the whole of the running time. Some of that is the situation she is in, but most of that is a smart and affecting performance. She makes Miranda not just sympathetic, but smart, making her even easier to root for. Eggar sells the whole performance in the first act, and everything she does afterwards we buy into completely. She got robbed.

Email ThisBlogThis!Share to TwitterShare to FacebookShare to Pinterest
Labels: 1965, A Patch of Blue, Best Actress, Darling, Oscar Got It Wrong!, Ship of Fools, The Collector, The Sound of Music