Film: The Dead Pit
Format: Internet video on The Nook. 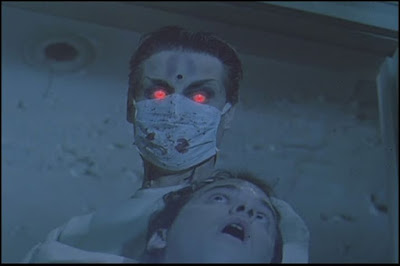 List off the clichés. Insane asylum? Check. Crazy, murderous doctor? Check. Crazy, murderous doctor back from the dead? Check. Amnesia? Oh, check. Psychotherapy that slowly reveals how the main character is connected to everything? Checktastic. Main character amnesiac who looks like she belongs in an ‘80s hair band music video? Checkaroonie. A patient with religious delusions? Chizzeck. The amnesiac heroine having a penchant for white, high-waisted panties? Check to the checkth power. Is there a single non-predictable death? Of course not. The Dead Pit has found its tropes and hugs them so tightly that it’s left marks on them. There’s even a scene where cops discuss what sorts of donuts they like.

We start 20 years in the film’s past at a mental institution where Dr. Colin Ramzi (Danny Gochnauer) has gone off the rails. He’s decided to experiment with the brains of his patients in the literal sense of dragging them out of their rooms and opening up the tops of their heads. He’s evidently been doing this for some time, because there’s a whole pit (a dead pit) of corpses when he’s finally discovered by Dr. Gerald Swan (Jeremy Slate). Ramzi threatens his boss, Swan shoots Ramzi in the head, and he seals off the entire building.

Flash forward 20 years and the arrival of our amnesiac main character, Jane Doe (Cheryl Lawson). Upon her arrival, there is an earthquake, and naturally the seals that are covering Dr. Ramzi and his dead pit come open, releasing the bad dead doctor back into the world of the living. Jane starts seeing visions of Ramzi, but this isn’t too surprising. She claims that she’s not actually an amnesiac but that her memories were actually stolen from her surgically. Think there’s a connection here? Of course there is.

Ramzi picks up where he left off on his murderous rampage and starts dragging off patients and nurses, specifically Nurse Robbins (Mara Everett) and orderly Jimmy (Jack A. Sunseri). For an unexplained reason, not only is Ramzi back, but so are all of the people he has killed, so this turns into a zombie horde as well. These zombies go after the brains of their victims, but not to eat. No, in this case, their goal is to extract the brains and bring them back to Ramzi.

So, the last half of the film is basically a zombie film in a mental institution. Like I said at the top, there’s not a horror movie staple that The Dead Pit won’t attempt to capitalize on and use in one way or another.

I know it sounds like I’m complaining here, and I pretty much am. But for everything that The Dead Pit doesn’t do in terms of being unique or different, it’s actually pretty entertaining. This is more or less the distillation of what people think about when they think of a low-budget horror movie from the ‘80s. As such, it’s actually pretty successful. I can’t imagine anyone claiming this as a great movie or even a great horror movie, but it does have its charms.

Among those charms is some pretty good zombie-style fake gore. We get some flailing zombie people walking around with brains in their hands. It doesn’t look real at all, but it’s entertaining in the way that only a low-budget horror movie can be. The zombies themselves are a lot of fun, too. The people playing them actually do a solid job of being undead creatures attacking people. Again, not scary but plenty fun.

The acting is about as solidly bad as you would expect with the single exception of Stephen Gregory Foster who plays inmate Christian Meyers, who is in the asylum because of his penchant for blowing things up. Naturally, this is going to become a plot point toward the end.

There wasn’t a single moment of The Dead Pit that I didn’t see coming. In fact, the big reveal in the last couple of minutes was something I called at about the 20 minute mark. But on some level, I don’t care about this. I had fun watching The Dead Pit if only to see all of the tropes that I figured would be there come to fruition. It’s not a great movie or even a good one, but it’s like putting on a comfortable pair of slippers. I can’t recommend it, but I will say that fans of the genre will see in it everything they love about cheap horror movies.

Why to watch The Dead Pit: Solid gore and it’s surprisingly fun.
Why not to watch: There isn’t a moment of this that you haven’t seen in another movie.

Posted by SJHoneywell at 7:52 AM