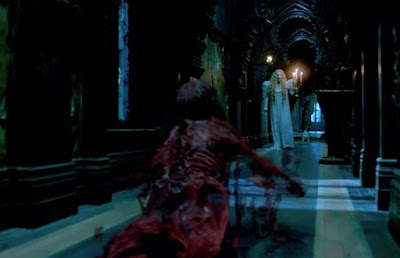 Anyone who knows me knows that I’m a sucker for Guillermo del Toro. I admit it—I like the guy’s movies. A big part of that is that I like how he uses monsters. For del Toro, monsters and ghosts may be agents that alert us to horror but are never the true purveyors of horror. No, for del Toro, humans are always both the best and the worst creatures in the world. We are, for him, capable of the greatest good and of the most shocking atrocities. I knew the minute I saw the trailer for Crimson Peak that it would be one of my rare trips to the theater. And so it was.

We begin with Edith Cushing (Mia Wasikowska) standing bloodied and cut telling us that ghosts are real. The bulk of the film then takes place in flashback to show us how Edith came to this state. We flash all the way back to her childhood and the death of her mother, who returns as a black and skeletal figure to Edith to warn her of Crimson Peak. This warning is repeated years later when Edith has grown and has tried her hand at writing a ghost story novel. Denied publication by a New York publisher probably because she is a woman in Victorian-era society who has written something without a romance, she endeavors to type her novel instead to not be betrayed by her feminine handwriting.

Suddenly appearing in her life is Sir Thomas Sharpe (Tom Hiddleston), a near-bankrupt British aristocrat who has a dream of harvesting the clay from beneath his family’s traditional estate to be used as a building material. He has come to New York to secure funding from Edith’s father Carter Cushing (Jim Beaver). Carter takes an immediate dislike to Thomas and to Thomas’s sister Lucille (Jessica Chastain). Edith, however, is captivated with him, much to the consternation of Dr. Alan McMichael (Charlie Hunnam), who has been interested in her for years.

Carter wants the Sharpes to leave, and in fact bribes them to do so, forcing Thomas to break Edith’s heart in the process. But Thomas stays, and not coincidentally, Carter Cushing is brutally killed in his private club. Now with no family to her name and a great deal of wealth, Edith marries Thomas Sharpe and emigrates to his decrepit family estate.

There are only a few scare moments in all of this, but once we get to Allerdale Hall, things become much more serious. The house is literally sinking into the ground, and massive holes in the roof allow for a steady shower of leaves and detritus into the center of the building. Butterflies congregate in rooms. Disturbingly for Edith, there are ghosts here as well, and they seem both to threaten her and to wish to speak with her. Slowly, Edith begins to learn of the house’s terrible past and to learn of the history of its inhabitants. Meanwhile, Dr. McMichael sets about on his own quest to determine what has happened and to possibly save Edith from what may be a terrible fate.

The biggest single drawback to the film is that the reveal moment happened for me without a moment of shock. On the other hand, I think it’s supposed to be that way. I think we’re supposed to get a particular idea in our heads before that idea is revealed. However, I pegged it as one of two possibilities (it’s actually both possibilities) within the first minute of the relevant characters appearing. I have to think that this was at least partly intentional. There are too many obvious hints for one aspect of this to be a complete shock.

The movies of Guillermo del Toro always excel in the way they are designed, and having him do a movie in a gigantic crumbling mansion feels like the perfect environment for him. His films tend to have a great deal of visual flair, and Crimson Peak is a film that is all about the visual style of what appear on screen. Even if the story were not interesting, it would be gorgeous to look at, and I would not be surprised at set design and costuming Oscar nominations in about three months.

The performances are also good, if somewhat heavy-handed in the case of Jessica Chastain. In the minor character department, Burn Gorman (whom I recognized from Game of Thrones) is very good in a small role as a private investigator named Holly.

Crimson Peak is old-school in a lot of ways. While there are a couple of solid scares and some very good effects work on the various creatures, this is a movie that plays much more with creating an atmosphere than it does going for jump scares and gore. There are a couple of brutal moments of blood, but this is not a splatter movie. Instead, the goal is to create a slow increase of tension and build an atmosphere of dread.

While the setting is completely different, it reminds me in many ways of The Devil’s Backbone. The focus on ghosts, ideas of blood floating up and away from the various ghosts, the nature of restless spirits—these are all reminiscent of del Toro’s earlier film. Even the opening lines are the same. Where The Devil’s Backbone asks, “What is a ghost” (“Que es un phantasma?”), in Crimson Peak we are told, “Ghost are real. That much I know.”

Is it good? It is, although it’s not up to the standard set by several others of del Toro’s films except in the department of the visuals. It’s visually rich and rewarding and the story is a good one, but there aren’t any real surprises here.

Why to watch Crimson Peak: It lives up to del Toro’s reputation for story and set design.
Why not to watch: It’s not scary in the way you want it to be scary.

Posted by SJHoneywell at 6:24 PM