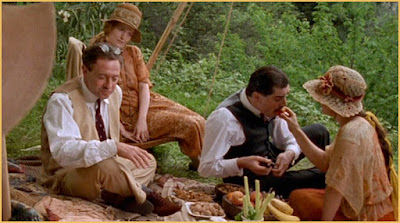 I’ve done this blog for almost six years. I think in that time I’ve earned a bit of credibility in terms of going into movies with enough of an open mind that I like movies that aren’t made for me. I genuinely hope everything I put in the spinner will be a movie that I like. I don’t want to waste my time watching movies that I dislike. So I did go into Enchanted April hoping that it would be closer to my enjoyment of films like Sense and Sensibility and not something that ended up with me shaking my head.

As the last paragraph hints, I ended up shaking my head. It’s a shame, too, because there’s real potential in Enchanted April and a wonderful cast. The story touches on aspects of magical realism, and I love magical realism when it’s done well. There’s something really special about a story that puts the real world in that sort of context. So when it’s done in a way that comes out as half-assed, I get frustrated with it.

In 1920s-era England, Lottie Wilkins (Josie Lawrence) lives a life of quiet desperation in a stifling marriage. One day she sees an advertisement in the newspaper offering a castle in Italy for the month of April. That same morning at her women’s club she sees Rose Arbuthnot (Miranda Richardson) looking wistful and immediately (and correctly) concludes that she has seen the same ad. The two plot to rent the castle together by sharing out expenses with other women who will go with them. The pickings are slim, though. The only two offers they get are from the stuffy and hidebound Mrs. Fisher (Joan Plowright), who always talks about the famous people she knew in her earlier days and Lady Caroline Dester (Polly Walker), a socialite who is used to being pampered and just wants time away from her life.

The husbands of our two principle characters react differently to the news that their wives will be spending a month away. Rose’s husband Frederick (Jim Broadbent) makes his living writing tawdry romance novels under a pen name. He’s happy for Rose to leave for a month since he will be on a book tour anyway. Lottie’s husband, the awfully named Mellersh (Alfred Molina), reacts badly. He is an up-and-coming lawyer and wants Lottie around. He’s especially angry because he planned on taking her to Italy himself.

Things in Italy get off to a rocky start, but slowly, Lottie believes that the aloof Lady Caroline and the testy Mrs. Fisher will eventually come around. We also learn that Lottie wants desperately to love her husband but doesn’t really know how to. Rose is terribly bored with her life and despondent that it will never change. And suddenly Lottie invites her husband to join them. And the man they rented the castle from (Michael Kitchen) arrives and (because he is nearsighted and frequently without his glasses) is the first man to not treat Lady Caroline like a piece of meat. And then Frederick Arbuthnot arrives.

So there are certainly aspects of magical realism going on here, but the film never really takes the bat off its shoulder. We don’t really get anything like magical realism. Instead, we get little hints that Lottie has a “feeling” that something is going to happen. She invites Mellersh to come to the castle because she “sees” him there. He shows up. He’s still his assholish self and then suddenly he’s not. There’s no real transition; he just loosens up and suddenly love blooms. The same thing happens with Rose and her husband. He shows up and she doesn’t know it. Then she sees him and suddenly they’re newlyweds. I don’t expect things in a story that leans toward magical realism to explain why things happen the way they do, but I do expect some explanation beyond “it’s this place” to make those things happen.

It’s additionally a shame because the cast is so good. Miranda Richardson, Joan Plowright, Alfred Molina, and Jim Broadbent tend to be good in whatever they’re in. Josie Lawrence was known to me only as someone who used to appear on the British version of Who’s Line Is It Anyway? It was interesting to see her in something much closer to a dramatic role, and for the opening act, she’s good and completely believable.

Enchanted April is a beautiful film. The scenery is lush and it looks, well, magical. There should be a story here that would be interesting and engaging and would carry through on the promise that we’re given at the start. Instead, it relies on the location to cover the idea of the magic that is happening, and it’s simply not enough. This wants to be a special film and story and it really could have been. But instead of showing us the magic, it tells us that it happened, and that simply doesn’t fly.

Why to watch Enchanted April: It’s beautifully filmed.
Why not to watch: There’s no story in this story.