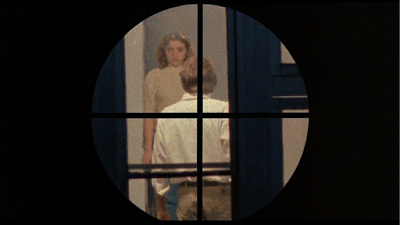 When the topic of directorial debuts comes up, it won’t go too long before I bring up Blood Simple, the first movie by Joel and Ethan Coen. I freely admit that I’m a Coen geek and so my opinion on this is going to be biased in some respect, but that doesn’t change the fact that Blood Simple would be a noteworthy film from an experienced director. As their first film, this is a strong showing, and they’ve only gotten better (mostly) from here.

Blood Simple has a twisted plot that goes in a lot of different places to get to the ending we eventually reach. Like any good noir, and Blood Simple is a vicious little noir, it starts simply and becomes much more complicated and convoluted as the story goes on. We begin with a simple extra-marital affair between Abby (Frances McDormand) and Ray (John Getz). Ray works as a bartender for Abby’s husband Marty (Dan Hedaya), who suspects that she’s being unfaithful. He’s hired a private detective named Loren Visser (M. Emmet Walsh) to catch them in the act, which he does easily.

The affair bothers Marty so much that he decides to hire Visser to kill the pair for $10,000, a task that Visser agrees to quickly. In short order, he’s got pictures for Marty of both Ray and Abby lying dead in bed, for which Marty pays him. Marty’s reward for this is to be shot by Visser with Abby’s pistol.,Visser inadvertently leaves both a photo of the dead couple and his monogrammed cigareete lighter in Marty’s office. The twist here is that neither Ray nor Abby are actually dead—the photos were doctored.

When Ray goes to collect back pay, he finds Marty’s body and Abby’s pistol and naturally assumes that Abby has killed her husband. He drags the body out to his car to dispose of it only to discover that Marty isn’t as dead as he appeared. This doesn’t stop Ray from burying him anyway and returning to Abby, who is naturally not sure what is going on.

And there’s so much more. From here it gets more and more complicated until it comes to a truly stunning climax. One of the best things about Blood Simple is that once everything is done, the only person who actually knows everything that has happened and can explain the entire movie isn’t alive to tell anyone what is going on.

There are a few things that really sell the film to me. First, it’s set up beautifully. When Ray first attempts to get paid and Marty confronts him, Marty warns him that eventually Abby will do something terrible and claim that she knows nothing about it. When Ray confronts her about what he thinks is her murder of her husband, she claims innocence and uses the exact words that Marty claimed she would use, which only makes Ray more suspicious.

Equally noteworthy is the scene where Ray finds Marty’s body and then drags him out to a field. The scene lasts more than 12 minutes and there is no dialogue. It’s a completely gripping scene and it just goes on and on, a masterpiece of visual storytelling. All we get are some non-word vocalizations from Ray and Marty and whatever is playing on the radio at the time. For a film that has already been intense, it’s a scene that only adds to the overall tension.

What makes Blood Simple as scary as it is is the character of Loren Visser. It feels strange to say that M. Emmet Walsh is scary because he seems like such a nice guy. I like Emmet Walsh, but in this movie he is the embodiment of a person who is not simply immoral, but a person who has absolutely no moral framework. This is a man operating beyond anything like a traditional morality. He exists only to do whatever he wants to get whatever he wants.

Finally, the stand-off at the end of the film is a moment of true tension and horror, and naturally involves Loren Visser demonstrating an astonishing will to create mayhem in the world around him. This is chilling stuff, and the kind of thing nightmares are made of.

Blood Simple is impressive in no small part because it is so ambitious and because it manages to succeed far more than it fails. Remade by the Coens today, I have no doubt that it would be more firmly established in terms of story and would be richer as a film throughout. But this is not a knock on the film that we have. Blood Simple is a freshman effort that plays like the work of people who had spent years behind the camera carefully crafting their narrative. It uses the camera brilliantly (and stole a few tricks from the Coens’ friend Sam Raimi) and in a way that screams veteran filmmaker.

If you’re a Coen fan and haven’t seen this, track it down. It will only make you respect the brothers even more for what they were able to accomplish.

Why to watch Blood Simple: It’s a twisty pile of awesome.
Why not to watch: If you’re easily confused, you’ll soon be lost.