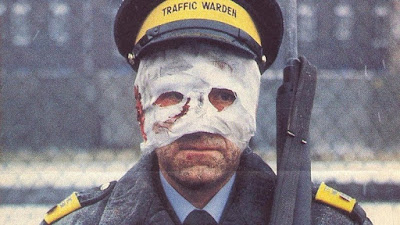 When I was a kid, The Day After was one of the most important television events ever. It was intended to be a realistic depiction of what might happen in the event of a full thermonuclear exchange between the U.S. and the Soviet Union. Threads, produced for British television the following year, was the BBC’ answer to the American film. Threads is the logical extension of the 1960s movie The War Game, showing in frightful and horrible detail what could happen in the event of a complete thermonuclear exchange. The film, rather than giving a broad view of the nation as a whole, focuses instead on Sheffield and the progression of events that affect the people in that town. Threads is a film I think needs to be discussed fully, so you can consider the rest of this review under a spoiler warning.

Threads works in large part because it presents the escalation of hostilities in a natural and believable way. When the film start, there is the standard tension between the U.S. and Soviet Russia that was the everyday norm in the 1980s during the Cold War. It’s almost a cliché that the tension takes place over Iranian oil fields. Initially, though, this all happens in the background of the stories of various people in Sheffield. Life goes on as it always did even as the geopolitical situation becomes more and more tense.

War slowly becomes more and more inevitable and even before it breaks out a good 45 minutes into the film, society has already started to splinter and break down. Roads are closed down for official traffic only, goods become scares in stores as panic begins to set in, and peaceful demonstrations become violent. And then the war actually happens, with a full exchange happening across the world. An airburst over the North Sea takes out communications across England. Minutes later, the airbase near Sheffield is struck. When the exchange is over, 3000 megatons have been traded back and forth, with 210 falling on England, the death toll hitting upwards of 30 million.

The rest of the film follows a few people that we have seen in the early parts of the film attempting to survive as best they can in a world that has gone mad. All essential services break down and anarchy reigns. Unburied dead bodies lead to outbreaks of normally preventable diseases like cholera. The remaining government structure allows capital punishment to attempt to restore order, and a new economy develops around food. In addition to radiation poisoning, cancer becomes a common threat and damage to the ozone layer only adds to this and also creates the threat of cataracts from ultraviolet radiation.

Threads doesn’t simply look at the days and weeks following the nuclear strikes. We get a look 10 years into the future after the bombs have dropped, with England having essentially reverted to a population of 10 million or so. While the government attempts to maintain some semblance of order via radio broadcast, this is merely superficial. Education is gone and what children have survived speak only a pidgin-like language. While there is some evidence that some modernization is returning at least to the levels of the Industrial Revolution, most of the people are essentially in the Dark Ages, living under a sort of feudalism combined with martial law.

There’s something about this topic and movies like Threads that hit me where I live. I grew up in this world where my friends and I didn’t discuss what would happen if a nuclear war happened but what we would do when it happened. It was, in our minds, inevitable and films like Threads depicted the world that we expected would happen sometime before we were through high school. Most of us determined that it would be better to go in the blasts than to survive the aftermath, and we figured that living in the shadow of Chicago would make that likely anyway.

What Threads does extremely well is simply show life going on. People lived under the shadow of imminent nuclear destruction and our lives when on. Threads gives us that, and then shows the destruction of it, the embodiment of our daily fears.

Threads also doesn’t skimp on the horror of the situation. There is no shortage of people horribly burned and irradiated, death for minor infractions, and the complete loss of humanity everywhere. That, even more than the bombs and destruction, is what makes Threads truly horrifying. It’s not the death, but the destruction of everything that we have built that is the most terrible occurrence. It’s made more effective by the lack of typical entertainment glamor actors or recognizable people. The horror of the situation is made more real by seeing people who look like us and our neighbors in this terrible situation.

The nuclear threat in the world has altered significantly in the last 30 years, so in that respect, Threads has lost some of its significance. It hasn’t lost anything else, though. This is a terrifying film and a sobering one.

Why to watch Threads: This was considered inevitable in the 1980s.
Why not to watch: If you’re easily scared or have a weak stomach, you’ll find this upsetting.

Posted by SJHoneywell at 8:38 AM