Film: The Last Command
Format: DVD from NetFlix on laptop. 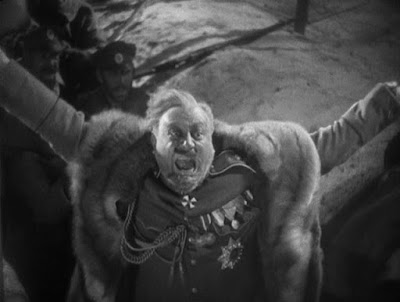 There’s a hefty little subgenre of films about the making of films. There may be some that exist before The Last Command from 1928, but I’m not aware of any (although I’m certain that should they exist, I’ll be corrected in the comments below). The Last Command uses the movie industry as an actual plot point—this is a movie that wouldn’t work as it does without the movie industry, which serves as something like a framing story for the flashback that contains the bulk of the actual story here. It also contains one of Emil Jannings’s performances from this year, one or both of which won the first-ever Best Actor Oscar.

We begin with a director making a new movie. He’s desperate to cast someone as a Russian general and begins angrily looking through them until he comes across the picture of an older gentleman who evidently looks the part. This man is Sergius Alexander (Jannings), who claims to have been an actual Russian general and a relative of Czar Nicholas II. When he attempts to pin a medal on his stage uniform, he is accosted by the other actors and we jump into the flashback that took this man from the greatness of the Russian Empire to begging for bit parts on a Hollywood backlot.

As it turns out, Sergius Alexander really was a Russian general in service of the Czar at the brink of the Russian Revolution. The trouble begins when a few events coincide. First, the Czar is coming to visit, and he needs suitable pomp and circumstance for his arrival. This means that General Alexander needs to recall desperately needed troops from the front. At the same time, while checking the papers of travelers, his men spot two people who are potential trouble. Lev Andreyev (William Powell) and Natalie Dabrova (Evelyn Brent) are posing as actors, but are actually dangerous revolutionaries. Sergius decides to play with them and ends up whipping Lev across the face and having him arrested.

Natalie is a different matter, though. He decides to keep her with him because of her beauty, something about which she is initially resistant. However, when Sergius is commanded to create an offensive because the Czar is visiting the front, he balks. He doesn’t want to spend his men needlessly so the Czar can pretend to be a part of the war. Natalie sees this and realizes that while she has a very different view of Russia, Sergius Alexander truly loves Mother Russia and is a man of integrity. When she has a chance to assassinate him, she is unable to pull the trigger on a man of such character.

But since we know the result of the Russian Revolution, we know that Sergius Alexander is essentially doomed. While traveling, the train he is on is taken over by the revolutionaries, putting him on the edge of being killed by a mob. A series of events happen with a couple of abrupt but completely believable character changes happen and with about 20 minutes left in the running time, we appear back in Hollywood with Sergius getting ready for his extra role in a movie about the Russian Revolution. Yes, there’s a lot I left out there. It’s worth being left unspoiled, because there are some genuinely good and surprising moments here, including a major one that happens almost immediately upon returning to the film’s present.

Jannings, of course, was an acclaimed actor of the silent era and early talkies and with reason. There was something about the man that allowed him to look both dignified and completely pitiable at the same time. In fact, a great deal of what he did here would come into play in later films like Der Blaue Engel, which tells a similar story of the fall of a once-great man. Janning’s last scenes are brilliant, and while filled with the sort of over-expressive acting of all silent dramas, it’s some of the best of the period.

It’s also worth noting that Evelyn Brent was completely ignored by the Oscars in the inaugural year, and that was a shame. While again melodramatic, she believably manages several quick changes in mood and intent with her acting and is completely believable in doing so. It may simply be that the role wasn’t big enough and the Supporting Actor/Actress categories hadn’t been created yet.

If there’s a downside here, it’s the same one that all silent dramas share. The acting is broad and aimed to play to the back row of the theater and it simply doesn’t carry over well into the modern era. Looked at from the perspective of its time, though, The Last Command is a good, solid drama. It’s also a shade under 90 minutes, so it doesn’t wear out its welcome. It’s not a film I plan on watching again any time soon, but it’s an excellent example of a drama of its time.

Why to watch The Last Command: The winning Best Actor performance from the first Oscars, and possibly the first movie about movies ever made.
Why not to watch: Like most silent drama, it’s heavy melodrama and overwrought.