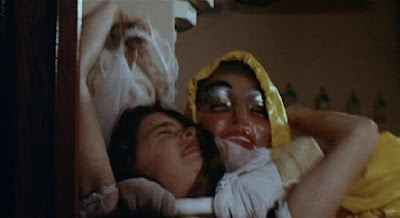 Alice, Sweet Alice (originally called Communion) is a film I’ve heard about for years but just haven’t gotten around to watching. I’d been told that this was an upsetting film that went places we don’t normally have films take us. I was also told that there were some things here that were visually disturbing or weird. Both of these things are true. The problem is that it’s not a great film. There are aspects of it that are at least really interesting, but I’d call this more a thriller than a horror film. The events of this film are entirely possible, which at least for me moves it out of the pure horror realm.

This is more or less the story of two girls and it quickly becomes the story of one girl. Karen Spages (Brooke Shields in her first-ever movie role) is preparing for her first communion. It’s quickly evident that her mother Catherine (Linda Miller) dotes on Karen. This is particularly obvious to Karen’s older sister Alice (Paula Sheppard, who was 19 and playing a pretty believable 12 or 13). Alice seems to always be in trouble, especially with Catherine’s sister Anne (Jane Lowry). Alice has some pretty serious issues. She likes to wear a bright yellow raincoat and a disturbing mask that looks almost human. Alice seems to terrorize everyone around her—her Aunt Anne, Karen, her mother, and Mrs. Tredoni (Mildred Clinton), who works at the local parish.

On the day of Karen’s first communion, she is brutally murdered in the church by someone wearing a yellow raincoat and the same creepy mask favored by Alice. Suspicions are raised when Alice walks in with Karen’s veil and tries to take communion herself. Later, Anne is attacked by someone dressed the same way, and from a place where Alice was seen going shortly before the attack. So, naturally, Alice is taken to an institution where she is analyzed. However, the attacks and murders continue to happen, showing that Alice is innocent. It is her claim that she saw Karen. Someone is certainly responsible here, but who?

There’s plenty more here than just some killing that is obviously reminiscent of Don’t Look Now. For starters, there is Mr. Alphonso (Alphonso DeNoble), the obscenely overweight pedophile landlord for the Spages. There are multiple scenes in which he attempts to molest Alice, evidently because a weird mask and a raincoat weren’t potentially upsetting enough. Alphonso seems to be in the film specifically because the rest of the film somehow wasn’t creepy?

Alice Sweet Alice more or less comes down to a whodunit, though, and we have that revealed to us with a good half an hour left in the film, so it fails in this respect. Instead, the last half hour of the film is everyone else figuring out that identity and a final confrontation in the church. Because of this, the last half hour ends up as a disappointment from the surprising set-up of the first few minutes.

It’s a shame, too, because there are some really interesting ideas going on here. One of the primary themes running through the film is that of the sins of the parents being visited on the children. This is potentially fertile territory to explore, the same sort of territory exploited by A Nightmare on Elm Street the following decade. But this only touches on this idea despite it looking like it should be a major theme. Another potential theme here is that of childhood mental illness. Alice is clearly disturbed—she’s labeled as schizoid at one point and she fits the diagnosis. There are a number of places where Alice is clearly demonstrating that she is mentally ill. And again, this is hinted at without being really explored.

In other words, Alice, Sweet Alice goes more for shock than it does for exploring the disturbing themes it claims to be about. That’s very disappointing. It also very much wants to reference Don’t Look Now, but has none of the visual or artistic flair of that film, although there are a few stylish shots.

Alice, Sweet Alice starts out with a bang, but it fades. It doesn’t help that most of the cast can’t act. Paula Sheppard is actually pretty good for most of the film, helped immeasurably by the fact that she was old enough to handle the part but genuinely looked young enough to fill the role believably. It’s not a bad movie, but it’s never going to be considered a classic and it shouldn’t be. If it had lived up to the promise of its first third, we’d be talking about a much different movie, and one that wouldn’t appear on a list of movies “You’ve Never Seen…”

Why to watch Alice, Sweet Alice: A creepy story featuring a creepier mask.
Why not to watch: The acting coach was evidently a chain link fence.