Film: The Sentinel (1977)
Format: DVD from personal collection on laptop. 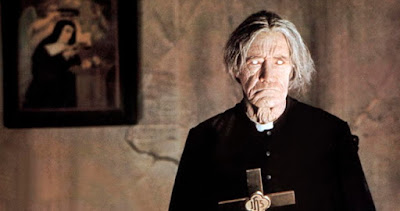 I saw The Sentinel for the first time in 2009 when I was writing the now-defunct and long gone first version of this blog. I was relatively unimpressed with the film then, so I can’t say it was one that I was dying to revisit. But, I’m going to get to them all eventually, so I might as well knock it out now. On a rewatch, I ended up liking this more than I did my first viewing, so I’m ultimately glad I chose to watch it again. While not everything the movie sets up is fully realized in its 92 minutes, this is a surprisingly ambitious little film. It also sports the single greatest cast list for a B-horror movie in cinematic history.

This is not one of those Texas Chainsaw Massacre: The Next Generation, before-they-were-stars cast lists, either. The Sentinel is filled with well-known, respected actors well into their careers in roles both big and small. Included in this are the following people: Ava Gardner, Eli Wallach, Chris Sarandon, Christopher Walken, Beverly D’Angelo, Sylvia Miles, Burgess Meredith, John Carradine, Martin Balsam, Jose Ferrer, Arthur Kennedy, Tom Berenger, William Hickey, Jerry Orbach, and Jeff Goldblum. Richard Dreyfuss has an uncredited role as an extra, and this is post-Jaws and from the same year in which he did Close Encounters of the Third Kind and won an Oscar for The Goodbye Girl. It causes one to wonder what sort of demonic pact director Michael Winner must have signed to arrange this.

Fashion model and advertising spokesperson Alison Parker (Cristina Raines) appears to have a glamorous life. She appears in television ads and on magazine covers and her boyfriend Michael Lerman (Chris Sarandon) is an up-and-coming lawyer. But things are strange in Alison’s world. She’s had a couple of unsuccessful suicide attempts, one of which was brought on by seeing her father having (and no, I’m not kidding) naked cake-eating time with a couple of women. Anyway, Alison doesn’t want to move in with Michael or marry him yet. She wants to make sure she can care for herself first. She takes a room in an old brownstone that comes with a live-in blind priest named Father Halliran (John Carradine).

What’s more upsetting is that Alison begins having disturbing dreams. A little investigation turns up the fact that the priest on the top floor is the only other apartment actually rented in the building. Charles Chazen and the others are either well-furnished squatters, figments of Alison’s fevered brain, or something else entirely. Since this is a horror movie, put money on the third option here. Even more, we learn that all of the people she thinks are living in the building but that no one else knows about are dead and were convicted murderers. Speaking of which, when Alison has a run-in with what may be her dead father and is found covered in blood, it brings in the attention of the local police (Eli Wallach and Christopher Walken). Through them we discover that Michael’s first wife died under mysterious circumstances, although charges were never filed.

In other words, there’s a lot going on here, and I haven’t mentioned the fact that the building Alison is living in is evidently a portal to Hell.

The Sentinel borrows a great deal in terms of ideas from other horror films of its time. There are shades of The Exorcist and The Omen here, for instance. Director Michael Winner channels some classics of the genre as well, particularly Freaks. The conclusion of The Sentinel comes with a cast of deformed “demons” that were actually deformed people, something for which Winner was roundly castigated.

The biggest issue with The Sentinel is that it may be too ambitious. There are a lot of characters and a lot of plot lines to stuff into a movie that barely creeps past 90 minutes. Some threads of the plot appear merely to comment on the main story. The Eli Wallach and Christopher Walken characters are a major part of the second act and into the third…and then they just vanish. What’s happening around them would certainly require some amount of police involvement, but their story is simply dropped in the middle to wrap up the main story. We’re left with a lot of places of no resolution because Winner tried to do too much with not enough time to do it in, stuffing 10 pounds of material awkwardly into a 5-pound bag.

But should ambition really be a downside of a film? True, Winner leaves a lot of threads dangling here, but I appreciate this more than something that doesn’t at least try to make the film complex and interesting beyond its capabilities. That Winner failed at making something completely cohesive says less than the fact that he went into this as big as he could.

A lot of The Sentinel really works. It creates some solid scares and does so honestly in the main, building tension and a sense of ill ease rather than giving us jump scares. The people who would claim that The Sentinel is a great film are probably few and far between. I will say that it’s an ambitious one and a film that succeeds in a lot of places. There are a lot of ideas here, and for what it is, The Sentinel delivers more than it doesn’t.

Why to watch The Sentinel: Seriously, look at that cast.
Why not to watch: Not all of the ideas come to fruition.