Ten Days of Terror!: Leave Her to Heaven 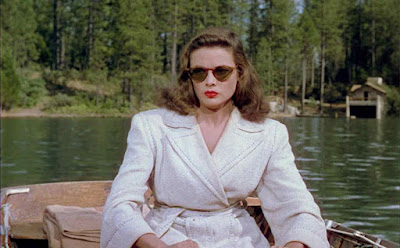 For the last two years, I’ve focused on traditional horror movies in the last 10 days of October. I do this because I like horror movies in general, love great horror movies, and because I tend to be so focused on Oscar movies that I don’t leave a lot of room for the scary stuff. There are times when I’ll slide more into thriller territory during these horror binges, but most of the time, I stick with the movies that would be classified by almost everyone as horror. Leave Her to Heaven is my biggest deviation from that typical late-October film. This is sort of a film noir despite being in glorious Technicolor. Rather than a traditional noir, though, this is the story of the coldest femme fatale in cinematic history.

Leave Her to Heaven is a film that’s told almost entirely in flashback, but it’s also a film that we forget is told in flashback almost immediately. As it opens, we’re introduced to Richard Harland (Cornel Wilde), a novelist who has just been released from a two-year stint in prison and has returned to live on a remote island where he did his writing. A few of the locals gawk, and the story of the last few years is revealed by his friend and attorney Glen Robie (Ray Collins).

One day on a train, Richard sees a woman named Ellen Berent (Gene Tierney) reading his latest novel. He is captivated by her (and one look at Tierney would suggest why), and she by him. She admits to staring at him not because she recognizes him from his picture on the back of the book, but because he looks surprisingly like her father, who has recently died. Romance slowly blossoms despite a few factors. First, Ellen is already engaged to a politically ambitions lawyer named Russell Quinton (Vincent Price before he became a horror icon). Second, there is the constant presence of Ellen’s cousin/adopted sister Ruth (Jeanne Crain). Third, there are a number of disturbing indicators that Ellen is possessive, jealous, and obsessive beyond all normal limits.

Regardless, Richard and Ellen are soon married—at her insistence and almost immediately after she breaks off her engagement with Russell Quinton. Slowly and inexorably, Ellen begins to demonstrate exactly how possessive she really is. While there are early hints, we get our first really look with her behavior regarding Richard’s crippled younger brother Danny (Darryl Hickman). Released from the hospital, Danny moves in with Richard and Ellen despite Ellen’s fervent pleas to his doctor to keep him in the hospital. Upset by the attention that Richard gives to his brother, she allows Danny to drown in the lake, coldly watching him struggle in the water until she sees that others might be observing her. Shortly after this Ellen becomes pregnant. Realizing that a child will also put a wedge between her and her husband, she engineers a fall down a flight of stairs to force a termination of the pregnancy.

I’ll leave the plot summary there. What makes Leave Her to Heaven work as well as it does is the slow build from the Ellen we first meet, an exotic beauty, to the Ellen we know by the final act of the film, an obsessed woman unable to be happy if anyone in the world is paying attention to the object of her obsession. While this is not strictly a horror movie, this is certainly a film from which plenty of horror movies have copped some ideas. Ellen’s psychology is central to that of plenty of thriller and horror movie villains.

Truly, the only objection I have to Leave Her to Heaven is the title, which doesn’t really indicate the sort of story we’re lining up for. I had this recorded on the DVR and didn’t really consider it until I read the short synopsis. Based on the title, I assumed this would end up being a sappy romance and not a particularly gripping tale of deadly love and possessiveness.

The only Oscar nomination Leave Her to Heaven managed was for Gene Tierney, and I’ll not be the one to say she didn’t earn it. Her portrayal of Ellen is done with ice water running through her veins. She is a perfect cinematic combination of staggering beauty (seriously, her first appearance on screen is as stunning as any few moments of any actress of the era) and cold, calculating evil. In fact, calling her relationship with Richard “love” does a disservice to the word. As the film moves, we slowly realize the depths of her insanity made all the more awful by its Oedipal overtones.

Leave Her to Heaven is not quite a traditional film noir. It’s in color for starters, and the ending doesn’t fit with the way a noir should end. Think of it instead as the purest character study of what a femme fatale should be. In that light, it casts a huge shadow over any film that uses obsessive, crushing love as a way to move the plot forward. It’s chilling not because of any deaths or gore, but because it feels like it could well be real; it’s Misery without the car accident and the hobbling scene.

Why to watch Leave Her to Heaven: Gene Tierney might be the coldest femme fatale ever conceived.
Why not to watch: The title doesn’t fit.