Ten Days of Terror!: Kingdom of the Spiders

Film: Kingdom of the Spiders
Format: Internet video on The Nook. 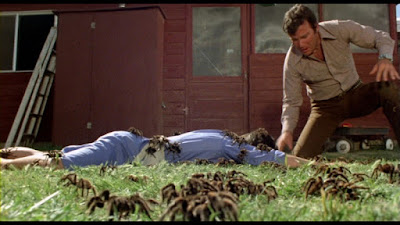 Okay, I should come clean right at the start here: spiders scare the shit outta me. I figured, though, that a 1970s movie about spiders and starring William Shatner might just be campy enough that I could muscle my way through it. Kingdom of the Spiders has all of the earmarks of being exactly that. There’s a plague of slow-moving critters attacking people in the middle of nowhere and there’s the distinct possibility of Shatner hamming it up on camera. Man, was I not expecting what I got.

I’ll be clear on this: Kingdom of the Spiders is a low-budget critter movie, but it’s also surprisingly effective in a lot of ways. One of the main reasons for this is that it’s really just a version of Night of the Living Dead with tarantulas replacing the zombies. It has almost all of the same plot points and the same story moments as the horror classic, albeit with a lot less overt gore. But for all of its potential goofiness and high camp, it takes itself seriously and manages to work pretty well.

One reason it does work well is that it has a lot going on on multiple levels here. We start slow, with the sudden death of the prized calf of Arizona rancher Walter Colby (Woody Strode). Local vet “Rack” Hansen (Shatner) runs a few tests and sends blood samples off to the big city. The next day, Diane Ashley (Tiffany Bolling) shows up to investigate. According to her tests, the calf died from poison, specifically spider venom. When the Colby’s dog shows up dead, Walter leads Rack and Diane out to his back pasture where there is a massive mound of tarantulas more or less living as if in an ant colony. They burn that mother down, not aware that there are similar tarantula colonies around the county and that the problem is multiplying rapidly.

So, that’s one plot point. A second is the cause of the sudden spider invasion in Arizona. The working theory in the film is that the tarantulas are migrating from the south because the overuse of pesticides has dried up their food supply. In a sort of evolutionary leap, the spiders are coordinating their attacks to bring down larger prey. It’s a nice little ecological message worked into what is otherwise a movie that exists to freak people out with lots of shots of large spiders.

There’s also a measure of political corruption going on here. See, we’re a few weeks away from the county fair, an event that brings in tourists and business into the area. The local mayor wants more pesticides sprayed on the spider mounds to kill them off so that the fair can go off as planned even though the pesticides were what caused the problem in the first place. It’s a nice little nod to Jaws where the local officials are also more concerned with money and business than the lives of the people in their jurisdiction.

All of these plots are working at the same time, and there’s still some effort put into creating some personal relationships and character depth. We learn, for instance, that Rack’s stupid nickname was given to him by his brother because he always lost at pool and had to thus rack the balls for the next game. We learn that Rack’s brother died in Vietnam and now Rack looks after his sister-in-law Terry (Marcy Lafferty) and her daughter Linda (Natasha Ryan). The local hotel is run by Emma (Lieux Dressler), who used to have a thing with the local cop (David McLean), but that the affair has been off for some time now. These are nice bits of character development in a genre not necessarily known for them.

Of course, then, there are the spiders. Like I said at the top, I’m something of an arachnophobe, so I’ll happily admit that I was pretty easily squicked by some of the scenes of people running around with tarantulas crawling on them. There’s a lot of them. While there are some logical leaps here in the way the spiders behave—they’re amazingly quick at getting into places despite being slow moving in general—most of these scenes work pretty well.

Kingdom of the Spiders is never going to be the sort of movie that makes someone want to be a filmmaker or that will change the world, but it does what it sets out to do very well. It presents a decent story, gives some quality monster movie deaths, offers a few creepy scenes of people encased in spider webbing, and slowly ramps up the threat and claustrophobia as our band of intrepid survivors is trapped in smaller and smaller sections of the hotel being overrun by arachnids. Viewing the last 20 minutes or so of the film as a creepy-crawly version of The Birds or Night of the Living Dead is not merely appropriate, it’s recommended. After all, if you’re going to steal, steal from the best.

I liked this a lot more than I thought I would. No one is more surprised by this fact than I am.

Why to watch Kingdom of the Spiders: A surprisingly good take on what is essentially a zombie apocalypse.
Why not to watch: You mean aside from all of the spiders?