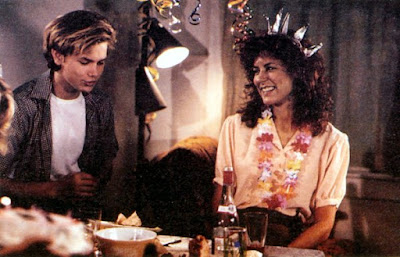 A little more than a week ago, there was a discussion of Oscar category fraud. I bring this up because Running on Empty is a case where this concept rears its ugly head once again. River Phoenix was nominated for Best Supporting Actor for his role in this film, but was evidently bumped down because nothing was going to stop the juggernaut that was Dustin Hoffman for Rain Man. Since the entire movie turns on Phoenix’s character and since he is in more scenes than anyone else, calling him a supporting actor seems like a real stretch.

Like many a movie, Running on Empty explores the very real human issues of loss and separation, but does so by giving us an extreme situation from which to view that situation. The Pope family consists of father Arthur (Judd Hirsch), mother Annie (Christine Lahti), and sons Danny (River Phoenix) and Harry (Jonas Abry). But that’s only for people who really know them. Their lives are nomadic, moving from place to place and putting down temporary roots before leaving virtually everything behind and starting over somewhere else.

This is because years before, Arthur and Annie bombed a napalm laboratory in an effort to end the Vietnam War. What they didn’t know was that a janitor was on-site and was blinded and partially paralyzed in the explosion. Arthur and Annie have been on the run ever since, getting money from former comrades and switching identities at the drop of a hat whenever they feel the heat is getting too close. They then materialize in a new place, make new identities, and cobble together reasons for the lack of the kids’ school records, and life goes on.

This time, though, things have changed. Danny, going temporarily under the name Michael, has suddenly found a place to fit in. The music teacher (Ed Crowley) at his new school discovers that he has real talent on the piano and wants him to audition for Julliard. Danny also meets the teacher’s high school-age daughter Lorna (Martha Plimpton), and the two slowly start to fall for each other. In fact, it’s not too long before Danny confesses his entire nomadic existence to her, and even tells her about his parents’ past and past crime. Danny wants to stay with his parents, but he also wants to have his own life and not feel like he is constantly being punished for a crime that his parents committed.

Like I said at the top, this is a pretty human story. It’s the sort of thing that a lot of parents deal with when a kid moves out and goes to college. But the story puts this issue into deeper focus by giving us a situation where Danny’s potential exile from the family may well be permanent. After all, if his parents are on the run and Danny reveals his past, he’s earned himself an FBI tail for the rest of his life. Danny staying behind doesn’t mean visiting at the holidays and phone calls now and then. It means likely complete separation. This is emphasized by a meeting between Annie and her father (Steven Hill), the first in more than a dozen years.

There are only a couple of obvious ways that Running on Empty can end, and the film is smart enough to give us the least likely by perhaps most emotionally satisfying of those possible endings. What it doesn’t do is give that ending enough time to really breathe. Essentially, the film is a long set up to the ending we’re going to get, and when we get there, it happens in a two-minute scene that is incredibly unsatisfying for everything that we’ve had up to this point. Running on Empty does a beautiful job of creating the characters and making them believable in an unbelievable situation, and then shorts the emotional payoff by wrapping up far too quickly. It simply happens, and it’s a jarring note in what is otherwise a surprisingly engaging film about a common problem in a unique family structure.

It shorts things in other ways, too. Arthur and Annie Pope are the two most interesting characters in the film. We get a good deal of Annie and her motivations and thoughts and very little of Arthur. Arthur could be fascinating, but what we get of him is two-dimensional. He’s paranoid, he worries about his kids, and he wants to keep his family together. And that’s all we have of him. For someone who is evidently motivated by his political philosophy into an extreme lifestyle, all we get is that he sets up food co-ops in the places he moves to. And?

The cast overall is good. Steven Hill has only a single scene, but it’s a damn fine one, and he’s damn fine in it. I was also happy to see Lynne Thigpen on screen, if only for a few minutes. I didn’t recognize her when I saw her, but there’s no disguising that butter-smooth voice. I’d have loved for her to be in it more.

What I think is most interesting here is that Running on Empty could have been a lot of things. Hell, this could have easily been a pre-Tarantino Tarantino film. After all, the characters are certainly there. But it’s not. Instead, it’s a genuine family drama with at least three characters (Danny and Annie Pope and Lorna Phillips) that we come to like and sympathize with. It’s surprising, mostly in good ways. Now if it could just have an ending that didn’t feel like they simply ran out of film.

Why to watch Running on Empty: A very relatable story in extreme circumstances.
Why not to watch: The ending is too abrupt.