No One Has Ever Escaped From... 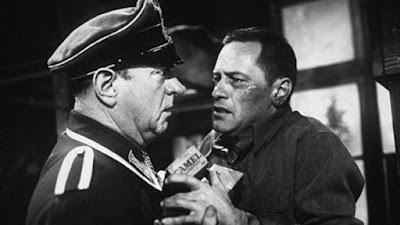 Stalag 17 is an interesting film for a lot of reasons. The movie takes place in a prisoner of war camp, but it’s absolutely in part a comedy. It has a truly dislikeable character who is ultimately the hero of the film. There’s a lot that works against Stalag 17 from the start, and yet the whole thing works. It’s helped by a diverse and interesting cast and the solid direction of Billy Wilder. That’s what turns Stalag 17 from a movie that seems like a collection of terrible ideas into one that generally works from end to end.

At points in the narrative, we’re given a voiceover from Sergeant Clarence “Cookie” Cook (Gil Stratton). Actually, in the case of this film, “Sergeant” is unnecessary in most cases since all but a couple of the Americans in the titular prison camp are of that rank. As the film opens, two inmates, Manfredi (Michael Moore) and Johnson (Peter Baldwin) are looking to go through the wire. They’ve got a plan and a tunnel and are all set to go. When they leave, the other men in the barracks start to bet on how far they’ll get. It’s all in good fun until J.J. Sefton (William Holden) puts down two packs of cigarettes that they won’t make it out of the forest surrounding the camp. Ultimately, Sefton is right; the pair is gunned down before they even reach the forest.

Cookie introduces us to exactly how Sefton worked the camp. He had a number of schemes to generate the camp equivalent of money: cigarettes. He ran mouse races, taking bets on the outcome. He built a still and sold potato peel schnapps. He rigged up a telescope and offered peeks at the Russian women’s camp nearby. But, since Sefton didn’t smoke cigarettes himself, he used them to bribe the guards for various perks and privileges for himself. Cookie, we soon learn, is Sefton’s assistant in his various schemes.

The deaths of Manfredi and Johnson, and the later confiscation of the radio shared between barracks starts the men thinking that they have a rat in their midst, someone actively collaborating with the German guards. Naturally, thanks to his cigarette wealth and willingness to trade with the guards, Sefton is the obvious culprit. This is certainly the opinion of barracks leader Hoffman (Richard Erdman), his effective second Duke (Neville Brand), and barracks security head Price (Peter Graves).

Things change in the barracks with the arrival of Lieutenant James Dunbar (Don Taylor). Dunbar is suspected of rigging an explosive on a German ammunition train while he was being transported to the prison camp, and has come to Stalag 17 as a temporary measure before being dragged off for interrogation by the SS. The members of the barracks come up with a bold plan to rescue Dunbar, but are forced to act with as much secrecy as possible. After all, they are certain of a collaborator being in their midst, and are all keeping an eye on Sefton.

What makes Stalag 17 more interesting is the obvious inclusion of characters who are there specifically as comic relief. In particular, prisoners Stanislaus “Animal” Kuzawa (Robert Strauss) and Harry Shapiro (Harvey Lembeck) exist here only as comic characters. Their time on screen is essentially antics to otherwise break the heavy mood of the film. The first time I watched Stalag 17, I wasn’t sure of the reason for their inclusion. I get it now. This is a hard film in a lot of respects, and Animal and Harry continually pull us back from that. They’re there, in a way, to remind us that we’re still watching a film. There’s also a sense from both f them that these antics are specifically to keep them both sane in an otherwise terrible situation. Without joking around and trying to have some fun, there would be no real reason to keep going at all.

I should also mention the two prominent Germans in the camp. The first is Johann Sebastian Schulz (Sig Ruman). It’s pretty evident that the Sgt. Schultz character from the old television show “Hogan’s Heroes” is based in part on Ruman’s Schulz. They speak in the same basic manner and both appear on the surface to be a little dopey and good natured. But the Schulz in Stalag 17 is dopey and loveable only on the surface. There’s a wicked intelligence to him, a conniving style of using feigned ignorance to get the prisoners off their guard. It’s something of a coup for Wilder to have gotten Otto Preminger to serve as the camp’s commander, Oberst von Scherbach. Preminger is perfectly believable as the prim and dutiful German officer. He’s given lovely quirks as well, such as putting on his knee-high boots to make phone calls to Berlin so he can effectively click his heels together when given an order.

But make no mistake; for all of the colorful characters here, this is absolutely William Holden’s film. Holden had the unenviable task of playing J.J. Sefton simultaneously as something of an opportunist villain and also as the ultimate hero of the film. We end up liking Sefton almost in spite of ourselves. He’s a jerk and cares nothing about anyone but himself, but we come to realize that he is innocent of what he’s been accused of, and so sympathy for him builds. Holden walks a razor’s edge in the role, never becoming too likeable but never completely losing our sympathy. It’s a hell of a role, and a fine performance from a man who did give a lot of bad ones.

I’m a fan of Stalag 17, and I’m no less a fan after this viewing. I’m also of the opinion that Billy Wilder was a genius, and for simply getting something like this film made, he makes the point for me. This feels like heightened reality, but it also feels close to the truth, or at least as clos to the truth as it could get.

Why to watch Stalag 17: It’s amazingly ballsy.
Why not to watch: The main character is a prime shit.